Sports: The circle of life at South 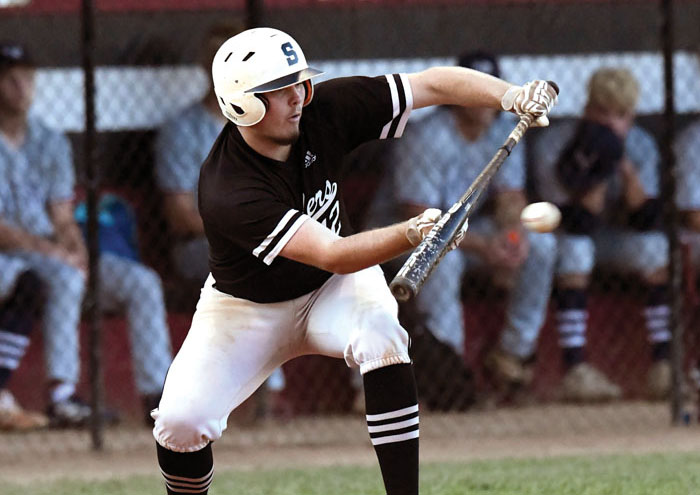 South’s Colton Fisher lays down a bunt earlier this season. Fisher came through with clutch hits and sweet defensive plays in the regional series with East Lincoln, as well as in the state championship series with South Brunswick. photo by Wayne Hinshaw, for the Salisbury Post

The sport is girls slow-pitch softball, a popular game at the time, but one that has disappeared from the landscape. It was replaced in the mid-1990s locally by its fast-pitch cousin.

Up early on that fateful Saturday 30 years ago are Raider seniors Leisa Seaford, the shortstop, and Alisa Lipe, the first baseman. They’re taking the SAT before joining their teammates for the long bus ride to Walnut Cove where they will play South Stokes in the 4A West Region final.

Slow-pitch softball was an offensive-minded sport, even with an extra fielder. There was a 1992 Central Piedmont Conference doubleheader in which South Rowan pounded out 15 extra-base hits, including three triples and two doubles by Seaford.

In 1992,  South Rowan cleanup batter Kess Beaver is breaking every known record the NCHSAA has for RBIs.

Head coach Perry Bradshaw is remembered mostly for being at the helm of the Raiders for the wildly successful Tracy Connor basketball era, but the former West Rowan athlete is also in charge of a slow-pitch softball squad that is powerful enough to slam balls over the fence, but also nimble enough to make the defensive plays behind pitcher Tracy Beaver.

At South Stokes, the resilient Raiders win again. Seaford is exhausted, but she clobbers the key home run in an 11-8 victory, and South Rowan advances to the 4A state championship series. The Raiders will be playing that best-of-three series at home on June 9-10, so the South Rowan players, seven of them seniors, are able to make a shortened graduation beach trip before they return for a Monday practice on June 8.

Davie County was the top seed from the Central Piedmont Conference in 1992. South Rowan had to hit the road for the first round of the playoffs, but the Raiders won 6-1 at Providence. Seaford socked a three-run homer in that one.

South Rowan’s season, in all probability, should have ended in late May in the second round against A.C. Reynolds. The school from Asheville jumped out to a huge lead on the South field. South Rowan trailed 11-2 in the fifth, but didn’t throw in the towel. South staged one of the greatest comebacks in the school’s athletic history to win 14-13.

South Rowan pulled out an 8-6 win against West Meck in the third round. The 11-8 slugfest at South Stokes followed.

Now the 4A field had been reduced to South Rowan and East champion Southern Wayne, a school near Goldsboro.

They played the first game of the best-of-three series in soggy conditions. Southern Wayne, which had lost only one game all season, won it 3-2.

The next day the teams convened at South Rowan again. Down 5-0 early, South Rowan came back to win 8-5. That forced a third game, which followed immediately.

Southern Wayne (26-2) reclaimed momentum, got hot at the plate, and won it 13-6. South Rowan came up one game short.

Lipe had a two-run double for South. Seaford and Kess Beaver launched their final homers for the Raiders.

Kess Beaver finished her monumental season with 95 RBIs in 30 games. South, a stout program which had reached the West Region final in 1991 before losing to Alexander Central, finished 25-5. Tracy Beaver had 21 pitching wins.

Kess Beaver headed to Louisburg. Seaford went on to Pfeiffer.

Thirty years later, the story had a happier ending.

Seaford’s son, Colton Fisher, played third base for South Rowan’s baseball state champs. He came through with clutch hits and sweet defensive plays in the regional series with East Lincoln, as well as in the state championship series with South Brunswick.

The state title was the first for South Rowan in a team sport recognized by the NCHSAA. South Rowan fans had one of the longest waits to celebrate in the history of North Carolina high school sports, but, at last, they celebrated.

South’s baseball title is at least the 83rd NCHSAA title for a Rowan school.

While baseball has long been considered one of the county’s flagship sports, East Rowan’s titles in 1995 and 2010 provided the only previous NCHSAA banners for Rowan in the sport in the last 60 years. Every school in the county has come close, but baseball has proven to be one of the toughest sports in which to go all the way.

Twenty-four of those 83 team titles are in the realm of track and field — boys and girls outdoor championships and boys indoor championships. Many of those can be attributed to the powerhouse coach Robert Steel built at North Rowan, although Salisbury has also made a significant contribution.

More than half of those 83 NCHSAA titles — a whopping 47 — have been won by Salisbury (or Boyden), including 12 by the girls tennis dynasty, six by girls golf and five by girls basketball.

Those 82 titles — they date all the way back to Spencer’s 1930 crown in boys basketball — do not include those won by the Rowan schools in the old Western North Carolina High School Activities Association, WNCHSAA, or Western Association, as it is sometimes called.

Rowan schools won at least 21 WNCHSAA titles in the sports of football, baseball, boys basketball, girls basketball, track and field and wrestling, and there may be more in other sports for which records aren’t readily available.

There are a lot of misconceptions about the WNCHSAA. Founded in 1929, it was a completely separate organization from the NCHSAA. It was not the western half of the NCHSAA, as some have come to believe, as the years have gone by.

At its peak in the 1960s and 1970s, the WNCHSAA included all the Rowan schools and their rivals in the South Piedmont and North Piedmont Conferences, as well as tremendous athletic schools in the foothills and mountains, such as Shelby, Kings Mountain, Watauga, Marion, Hickory and Crest.

While the WNCHSAA consisted of just four conferences and only 30 or so 3A-sized teams, it normally took at least three huge playoff victories against quality opponents to lay claim to a WNCHSAA title, and the men and women who coached in that era and played for those teams, to this day, regard those precious titles as “state championships.” They’re not exactly state championships, but they were significant achievements. Those teams won everything that was there for them to win. No one can deny they earned their place in history.

The NCHSAA champions list also does not include titles won by Rowan schools such as J.C. Price and Dunbar. During segregation, Price’s Red Devils and Dunbar’s Tigers competed with other Black schools in the North Carolina High School Athletic Conference.

Many records aren’t available, but we know Salisbury’s J.C. Price won football state titles in 1940 and 1952, while East Spencer’s Dunbar won it all in boys basketball in 1959.

A list of known titles is in today’s Scoreboard.