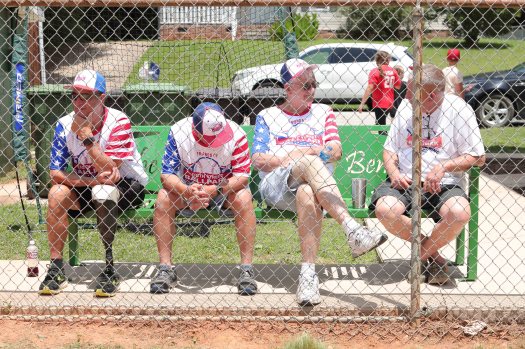 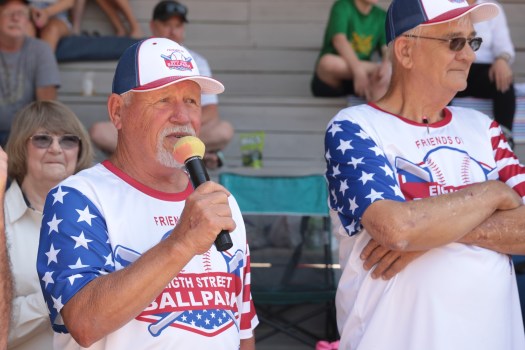 Photo courtesy Jacqui Smith Watson - Phip Sparger speaking next to Willie Noles. The field was named after the two for their longtime service to Spencer youth baseball. 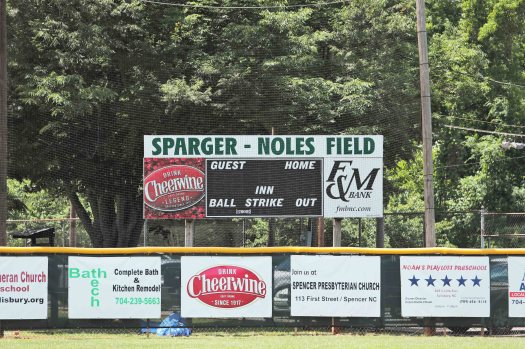 Phip Sparger and Willie Noles were surprised when a new scoreboard bearing both their names was unveiled Saturday morning. The town owns the park and the Board of Aldermen signed off on the name change at a recent meeting. The change was recommended by Friends of Eighth Street Ballpark, a new nonprofit that has been spearheading renovations at the park.

Rusty Miller, a local insurance agent who has been spearheading the project, wanted to keep the name change under wraps so it would be a surprise for Sparger and Noles. When they arrived on Saturday, Alderman Steve Miller did the unveiling.

The Mauldin family also unveiled a bench donated in honor of Sparger’s father, placed where he used to sit for every game at the field.

Sparger has coached and taken care of the field for more than 50 years. At one point he was president of the local league and been involved in Spencer baseball at every level.

“I would guess 90% of his spare time was at the ballpark,” Miller said.

Noles began coaching in Spencer in the 1960s and was one-time president of the league as well.

Sponsors were also honored that morning and an alumni game was played between people of all ages.

Sparger and Noles coached the alumni game so their stamp would be on the first contest on the field bearing their names.

“It was a great weekend,” Miller said.

The Sparger-Noles field and its fresh digital scoreboard are the latest development in the project, which is still looking for about $20,000 to finish its first phase of renovations before kicking off a larger campaign for new lighting and a paved parking area. Some alumni who came back to Spencer to play made donations on Saturday and were impressed by the overhauls at the park.

Miller said for him the park helped form lifetime friendships. He grew up in Rowan County and played at the field. He also has a professional interest in field maintenance, holding a certificate in turf grass management. When he had the chance to move back to Salisbury a few years ago and saw the field needed work, he decided to get involved.

“We’re just wanting to give back what we had, and we have the ability to do that,” Miller said.