‘Where I’m supposed to be’: Veteran, Salisbury-native providing military aid in Ukraine 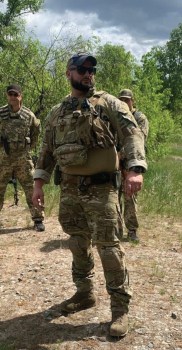 Michael Hill, a Salisbury-native and military veteran, has been in Ukraine for several months, helping to provide aid and train others as Russia continues its invasion of the country. Photo submitted. 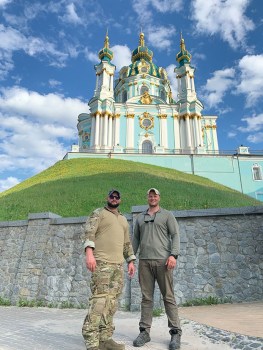 Michael, left, and a friend in front of St. Michael's Golden-Domed Monastery in Kyiv, the capital of Ukraine. Photo submitted. 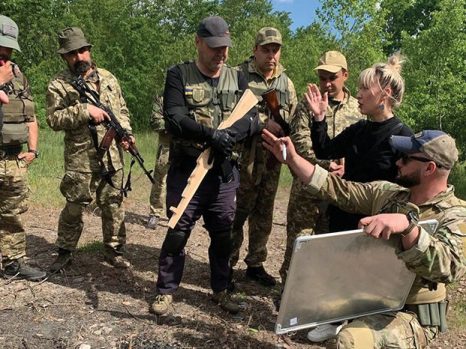 SALISBURY — Michael Hill celebrated his 37th birthday in a war-torn country thousands of miles from home, listening to “Happy Birthday” being sung in a language he doesn’t know.

Nothing about the moment was normal, but it was a brief, happy reprieve from what has otherwise been a dangerous, stressful and rewarding few months for Hill.

A few weeks after Russia launched its invasion of Ukraine in late February, the military veteran and private military contractor left the United States and flew to the eastern European country. He’d been asked to help transport a family from the eastern part Ukraine — the area that has seen the worst of the fighting so far — to a safer area in the west.

After the mission was complete, the Salisbury native and a group of individuals with similar backgrounds decided to stay in Ukraine to help the country in any way they can.

“I’ve developed a good network of sources and contacts and these people need a lot of help and myself and the guys who are with me have a lot to offer,” Hill said.

Now he’s not sure when he’ll come back to the United States.

“When you arrive in the middle of the night to pick up a family and you have a kid who has no idea what’s going on, this family just left everything they have, not knowing if they’ve ever come back and you see a smile on a kid’s face, that changes you,” Hill said. “It’s hard to leave.”

Operating in perilous conditions is nothing new for Hill.

After graduating from North Rowan in 2003, he set off for military college in Georgia. Not long after he was forced to return home when he was diagnosed with cancer. Eventually beating the disease, Hill enlisted in the Army and completed two tours in Iraq.

When he left the Army in 2012, Hill started private military contracting — mostly doing what he describes as high threat protection. The job has taken him across the globe to five different continents and 28 countries.

Although he’s familiar with war, seeing the effects of the violence in Ukraine has been shocking.

“Towns are completely decimated,” said Hill, talking to the Post via video chat from an undisclosed location in Ukraine. “If it’s not blown up, it’s burnt. It’s a disaster.”

The war being fought in Ukraine is different than what he experienced in Iraq.

“There’s a lot of crazy stuff going on,” he said. “It’s not like a war on terror. It’s two conventional armies fighting a war. In Iraq and Afghanistan we had the advantage of technology … In this war, both sides of it and you don’t really have an advantage.”

“These individuals are lawyers, bakers, plumbers and now they’re full-time soldiers,” Hill said. “Most of them don’t even have uniforms.”

There have been some close calls during Hill’s time in Ukraine, including an explosion that killed a few members of his party and left him with a gash on his forehead.

“We were working with a unit that hit a landmine,” he said. “It decimated their truck and four guys were killed. There were some foreigners in the mix. It was another day in the life.”

Even though a lot of the action has happened in eastern Ukraine, Hill said there are few completely safe areas anywhere in the country. Air raid sirens have become a daily occurrence most places he’s been.

For Hill, who doesn’t speak Ukrainian or Russian, communication has been difficult at times. But some things have transcended the language barrier.

“It’s amazing how soldiers around the world have the same tendencies and do the same thing,” Hill said. “When you’re out in the field conducting operations, a lot of the non-verbals and body languages are the same. It makes it a little bit easier. There still is an issue with the language barrier. We have interpreters, but they’re few and far in between.”

Through a secure messaging app, he’s kept in touch with his mother and father, who still live in Salisbury. While he misses his family, he said he’s focused on the mission at hand.

“These people need me and I know I’m where I’m supposed to be,” he said.

Hill’s presence in Ukraine has, from the start, been self-funded. He’s established a GoFundMe for those who would like to support his efforts. It’s called Operation Hold Fast, a term used in the military that means, in his words, “Don’t give up. Stay there. Don’t give up ground.”