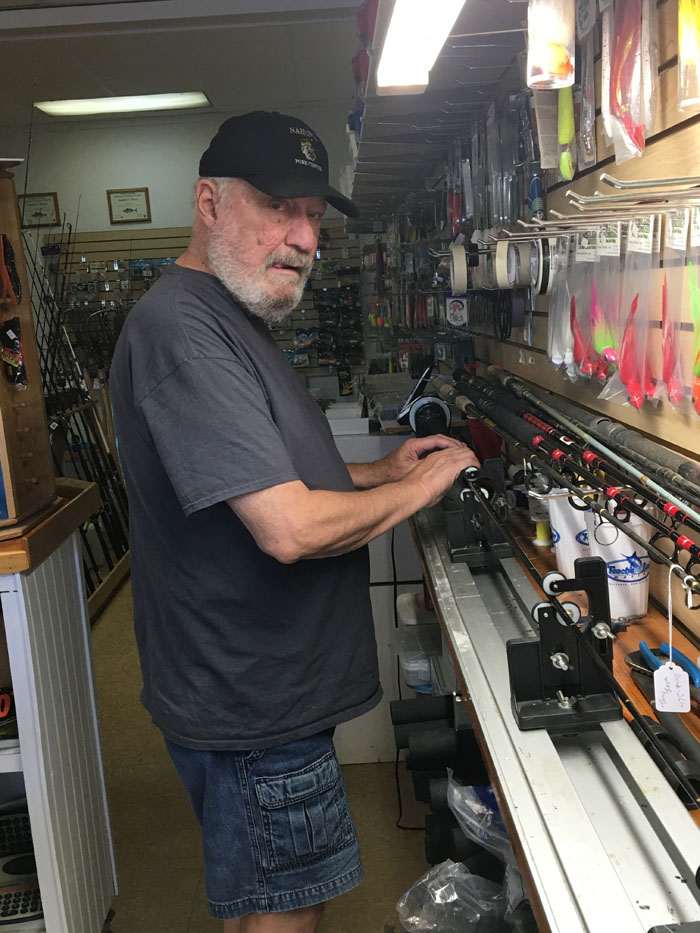 Steve Hissey has no plans to retire. Submitted photo

HATTERAS — About 40 years ago, I first met Steve Hissey, who owns The Pelican’s Roost, a tackle shop in this tiny Outer Banks fishing village.

Married about a year, I vacationed with my wife and new in-laws in Buxton, a fishing village just down the road, hard by the Cape Hatteras Lighthouse, but I did all my searching for fishing information and buying of tackle and bait in Hissey’s converted gas station on NC 12.

The latest visit started with a handshake across the counter, the declaration that I was finally retired, and Hissey’s claim that he’d retire when they found him “lying down on my back” behind the counter.

I called Hissey every Thursday morning, nine months out of the year, for 22 years in a past job as outdoor editor for the Winston-Salem Journal. He provided the fishing report for his end of the Outer Banks, and his reports were rarely, if ever, wrong. That’s what you get when the guy on the other end of the phone likes to fish as much as he likes to sell bait and tackle.

And that’s sort of how a former hospital administrator from Baltimore wound up on the Outer Banks, the thin ribbon of sand that separates the Pamlico Sound from the Atlantic Ocean.

Hissey, 71, related that his Outer Banks connection was at Catawba College in Salisbury, where he graduated in 1972.

“I went to college with Bob Eakes of the Red Drum Tackle Shop, who was from here,” Hissey said. “I’d go home with him and go to Cape Hatteras and pitch a tent and fish. He called me in 1977 and said he’d just gotten the lease on the tackle shop and wanted me to manage it.

“I had been a billing supervisor at Johns Hopkins and Baltimore City Hospital, making $4 an hour. I knew that to get anywhere, I’d have to go back to school for a master’s (degree) and learn all that computer stuff. Then Bob called me, and I thought, ‘I can go back to school and learn all that computer stuff, or I can go to Hatteras and work in a tackle shop and fish.”

Hissey established himself in the tackle business quickly. After a year at the Red Drum in Buxton, he was approached by Ray Couch, who had leased the tackle shop to Eakes.

“He said there was an old gas station, the Monitor Mart, that was owned by the Odens. He was looking for someone to manage it, and he started me at $300 cash a week. We were open 6 to 11, seven days a week,” he said. “My wife, Connie, was making subs at a sandwich shop, and I talked her into helping me. Then, the Odens wanted to lease it to me.”

Hissey jumped at the chance. In addition to fuel, the old Monitor Mart had been converted into a convenience store, and he recognized that gas, beer and bread would draw people into his tackle shop. He priced his regular gas at 2 cents a gallon cheaper than the competition, which drew the ire of the locals, and renamed the store The Pelican’s Roost.

“There were always a lot of pelicans around, and they’re fishermen, so that’s sort of why I named it,” he said.

A year later, he convinced his brother, Dave, younger by 2 years, to leave a job in High Point and become his partner in the tackle shop.

The Pelican’s Roost was quickly established as one of the go-to places on Hatteras Island for fishing info, bait and tackle. It didn’t hurt that the HIssey brothers developed a reputation as excellent fishermen, papering the walls of the shop with big-fish citations from the N.C. Division of Marine Fisheries – especially cobia. The shop did a booming business until Mother Nature stepped in in 2003. That’s when Hurricane Isabel arrived, a few days after Labor Day. Carrying winds of 105 mph, it struck Hatteras directly. A 25-foot storm surge flattened houses everywhere and cut a 1,000-yard breach in the island between Hatteras and Frisco, a village about 5 miles to the east, up NC 12.

I remember an aerial photo taken several days later that ran on the front page of the Journal. It showed the breach, and some of the devastation. I examined the photo carefully, looking for my favorite tackle shop. I remember relief when I found it, when it appeared unharmed, shouting out to my wife from the kitchen table that The Pelican’s Roost had survived.

“I knew sooner or later, it being on a slab, that it was gonna happen,” Hissey said. “We were there 26 years, then the back wall blew out and everything wound up back in the sound. The insurance company refused to cover it; they said it was wind damage. Yeah, not the 25-foot storm surge, but the wind. I got $12,000, and we had $60,000 in stock. And the Odens decided not to rebuild.”

The Pelican’s Roost ceased to exist for a couple of years. Hissey went to work building furniture at All Decked Out, a local business, then he worked a year in maintenance for a local real estate company, Midgett Realty, trouble-shooting problems with rental cottages it managed.

Soon, however, the MIdgetts figured out that Hissey might be more valuable in another job. They owned Teach’s Lair Marina near the Hatteras-Ocracoke ferry docks and offered Hissey a chance to take over the Marina’s tackle shop.

“Connie was working the cash register at the Pirate’s Chest (a gift shop) on Ocracoke, and Midgett asked me to take over the tackle in 2005,” he said. “So I co-managed the marina with Dave.”

One day, Hissey said, he was picking up a box, a heavy one filled with mullet, when he hurt his back.

“I crushed a disk in my back. I was in bad shape. So I filed workman’s comp(ensation), and after I got back, they let me go,” he said. “I took the money from my workman’s comp settlement and opened this place up again. A lot of my old customer’s from Teach’s came here.”

Hissey and his wife run the place, which is in a building on NC 12 about a mile from the original Pelican’s Roost. He works the afternoon shift seven days a week, She works the morning shift. He’s been building custom fishing rods for years, and that’s become a lynchpin for the business these days. He has no plans to retire. He’ll quit working the day they have to carry him out on a gurney.

And he’ll love every minute of it, especially afternoons when some of his regular customers pull chairs up to the counter, pop open cans of beer, share pork rinds and discuss the day’s events – and fishing, always fishing.