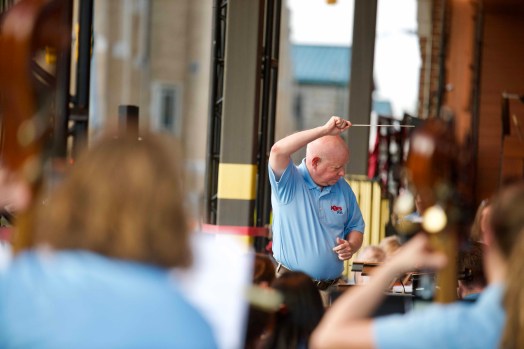 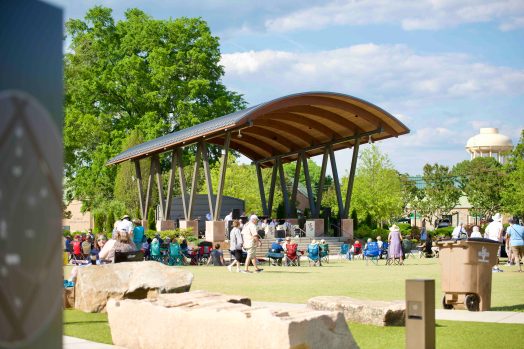 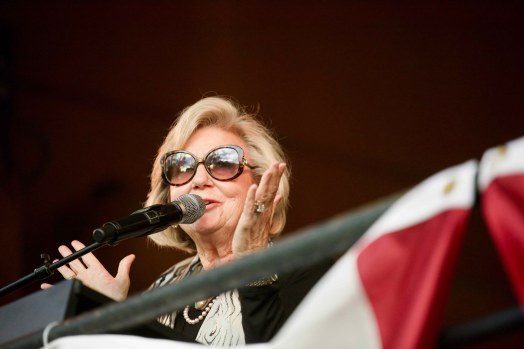 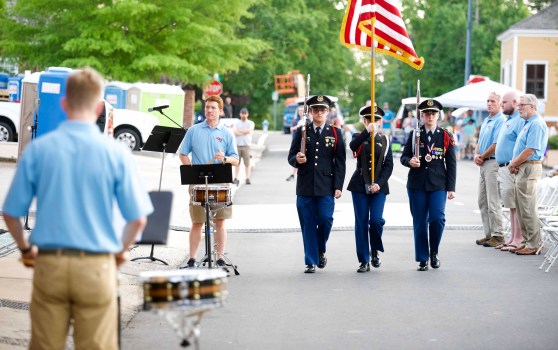 Carl Blankenship/Salisbury Post - The East Rowan Color Guard presenting the colors for the playing of the national anthem.

SALISBURY — A tradition returned to downtown Salisbury on Saturday evening and drew a packed house.

The Salisbury Swing Band kicked off Pops at the Post in Bell Tower Green’s amphitheater and Salisbury Symphony took over the Salisbury Post’s loading dock later in the evening.

The fall 2021 event was supposed to be the park’s grand opening, but it was called off at the last minute and adapted to a virtual performance. The symphony produced a highlight reel of past performances in 2020.

The streets surrounding the park were blocked to make way for the show early Saturday morning, with the exception of West Innes Street. Tailgating was available this year and lined the section of Fisher Street that runs next to the park along with food trucks. Attendees walking into the park from Innes Street were greeted by a Cheerwine stand.

A Black Hawk helicopter was planned to arrive on site on Saturday morning courtesy of the National Guard, but plans changed on Friday so the flight in didn’t happen.

Francisco Martinez and Connie Dinkler said they came to the show for years before they were moved online for the pandemic. The last edition they attended was in 2019, when the show was moved to the N.C. Transportation Museum in Spencer because of the pending Bell Tower Green construction at the time.

Martinez said his favorite part of the event is the music.

“We love to listen to live music and also see people,” Martinez said.

Dinkler said they also particularly like Latin dancing, and they took to the pad in front of the amphitheater briefly when the swing band played a Latin number.

Dinkler and Martinez said they have been to the park before, but this was the first live music they’ve been able to enjoy at the new venue.

“We really appreciate that this is happening, and it’s free,” Francisco said. “It’s really good for the community.”

Blanche and Julian Robertson Family Foundation Executive Director Jason Walser said this has been a dream six years in the making, crediting some on the long list of people who made the park possible.

“We raised over $13 million through 800 different families, a lot of foundations, a lot of corporations, partnerships between the city, the county and the state,” Walser said. “This is truly a wonderful, wonderful day for our community. It represents the best in us.”

The symphony portion of the show kicked off with “The Star Spangled Banner” and local composer John Stafford’s “Bell Tower March.” Stafford’s piece was written about the bell tower and its now accompanying green.

The symphony opened with a fanfare for Ukraine, a rendition of Frank Sinatra’s “My Way” played in tribute to the late local banking pioneer and philanthropist Paul Fisher, a medley of popular film themes and an overture by Brahms among other pieces.

The show was capped off with Tchaikovsky outdoor symphonic classic “1812 Overture” and a pair of John Philip Sousa pieces.

Pops started as one-off celebration of the Post’s 100th anniversary in 2005. The paper and the symphony decided to make the show an annual affair because it was so popular.

“The Post is thrilled to have the Pops back and again be the venue for this special event. Pops is uniquely Salisbury.  After hearing about it for years I can honestly say it exceeds any description,” Post Publisher John Carr said. “While we are honored to be the venue, it is the thousands of volunteer hours, incredibly generous sponsors and of course the years of dedication by the performers that make this event possible.  Many people work all year to bring this event to Salisbury.”