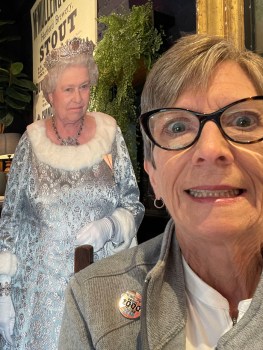 The queen, at least in cutout form, seems to think I used the wrong fork... submitted photo 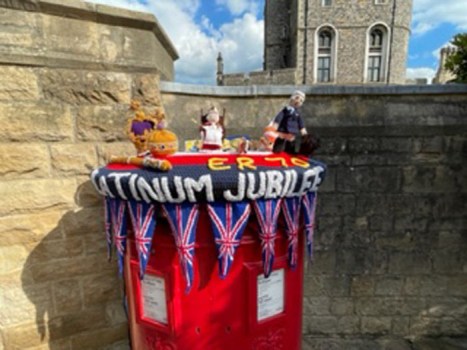 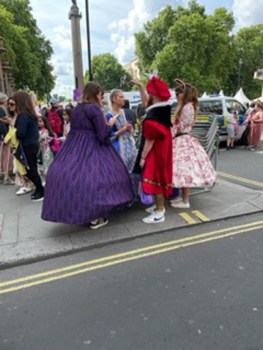 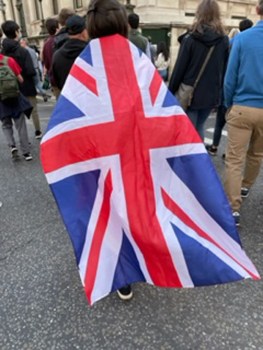 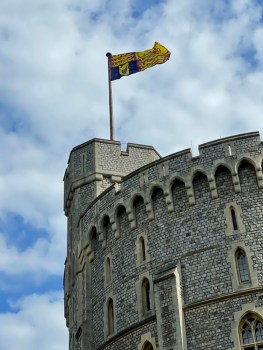 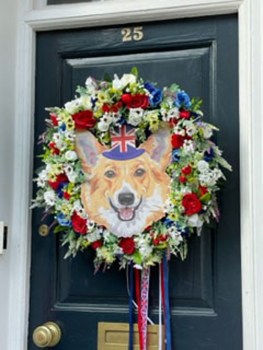 Many homes had elaborate decorations to celebrate the Jubilee. submitted photo 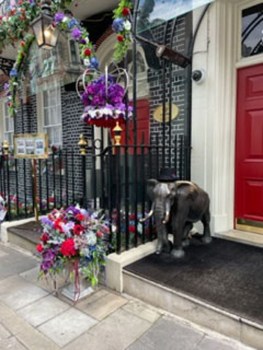 Businesses get in on the decorating. Karen South Jones photo 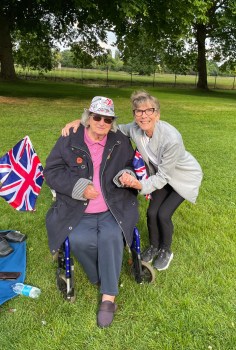 Arriving in London on Wednesday morning was like being plunked into a wild, exciting, chaotic party. The Platinum Jubilee for Queen Elizabeth II created a four-day bank holiday, like our federal holidays. The extended weekend, combined with a break for school students, means that there are people everywhere. This is my first time in London and I’m sure it’s always crowded. But the number of people here now is beyond anything I’ve experienced.
The excitement is palpable. Despite the sheer volume of people, and the need to let go of any notion of personal space, the mood is celebratory. It’s obvious the Queen is a much-beloved figure and that her 70 years of service are respected and honored. Just below the surface, however, there is a sense of nostalgia. There’s a recognition not only that the opportunities to celebrate the Queen’s remarkable life are limited, but also that this is a milestone which likely will not occur again. I think everyone, me included, simply wanted to be present in the city in which these magnificent Jubilee events are occurring. We want to be able to bore our children and grandchildren with the stories of “where we were for the Queen’s Platinum Jubilee.”
Honestly, I didn’t even get close to the Trooping of the Colours or the queen’s appearance on the balcony of Buckingham Palace. Even if I had gotten up early enough, which I did not, I’m still not ready to be part of a potential COVID super spreader event. I did meander on the fringes of the crowds to soak in the atmosphere before leaving for my tour of Windsor Castle. Turns out that site was rocking, too. I can’t say enough about the tour and the Evensong service I attended in the Castle’s St. George’s Chapel. It was my stroll on the Long Walk that I may most remember. A fireworks display were planned for later that evening. People and families were arriving to enjoy picnics, impromptu cricket games, and even some American football. I made friends with Rita and her son, Steve, when I stopped to see if I could take her picture. They were just delightful, curious about where I was from and why I was there. I was ready to adopt Rita as a surrogate grandmother. Unfortunately, I wasn’t able to stay for the fireworks as I needed to navigate my way back to London. I have stories to tell about getting lost on trains and the Underground and just walking. Those are for another day. Even without seeing the fireworks display, it was a marvelous experience and I’m so glad I had the opportunity to be here.
Now, I’m off to St. Bee’s Head in northwest England on the Irish Sea. From there I will attempt the 192-mile coast to coast path. Over 13 days, I will make my way across the country, ending at Robin Hood’s Bay. I’ve been training for almost a year for this very physical challenge. If the support I’ve received from family and friends is any indication, I’m confident I’ll make it. I may have sore feet. I may be exhausted. But I will make it.
Stay tuned.
Karen South Jones is executive director of the Rowan County Youth Services Bureau and a former member of the Rowan-Salisbury Board of Education representing the North District.