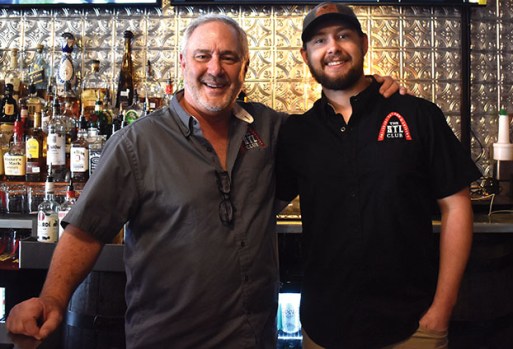 Larry, left, and Danny Roth have opened the Salisbury Tavern and Leisure club at 118 W. Innes St. The social club, inspired by taverns in St. Louis and filled with classic games, is a joint venture for the father and son. Ben Stansell/Salisbury Post 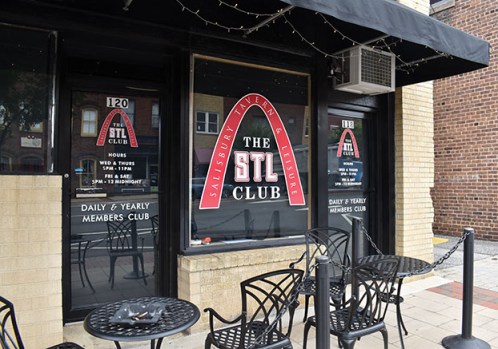 Larry and Danny Roth envision The STL Club being a gathering place for people in downtown Salisbury. There is a small outdoor patio and the inside is stocked with games and TVs. Ben Stansell/Salisbury Post 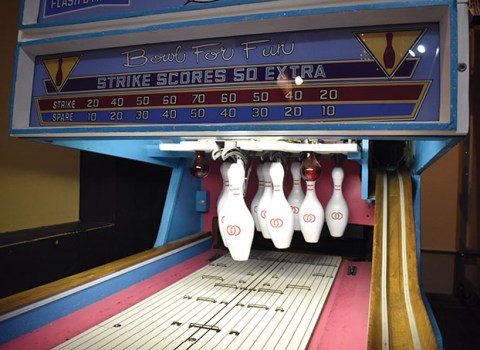 Larry Roth is proud of the collection of classic games at the STL Club, but he might be most prideful ot this refurbished 1961 Chicago Coin Princess 16-foot bowling game in the back room. Ben Stansell/Salisbury Post 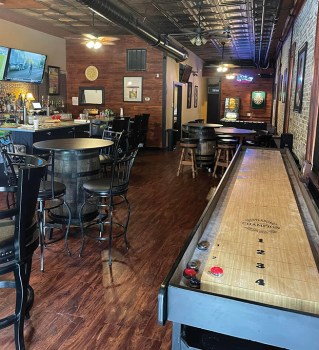 A look inside The STL Club. Photo submitted.

SALISBURY — The St. Louis of Larry Roth’s youth was a town with a tavern on every corner.

Not places of debauchery, he remembers the bars fondly as neighborhood gathering spots where people of all walks would converge for a good time.

“Everybody on the block hung out at their local pub,” Larry said.

That idyllic version of St. Louis is what Larry has sought to recreate at The Salisbury Tavern and Leisure Club at 118. W. Innes St. The bar’s initials, STL, are no mistake. Neither is the red arch logo. The father, Larry, and son, Danny, venture is nothing if not a love letter to their hometown, nestled near the heart of the town they now call home.

The STL Club opened quietly a little over two weeks ago, delayed several years by the pandemic.

It’s a private membership club. An annual membership costs $125 and comes with a number of perks, including a free T-shirt on a member’s birthday, $2 off all food items listed price and no competition fee for any game tournaments, which will be held weekly. A $10 day pass can be purchased by non-members.

In the two weeks since Larry and Danny opened the doors, about 50 members have already signed up. Larry said he plans to cap it at 150 members.

“I don’t ever want to get to the place where members who have paid can’t come in because it’s too crowded,” Larry said.

More detailed membership information can be found inside the tavern. Larry plans on holding an open house when The STL Club hosts its grand opening on the weekend of July 15-16 because he “wants people to feel good about what they’re joining.”

One of the biggest perks of being a member, aside from “reasonable” drink prices, is having unlimited, free access to the plethora of classic games spread throughout the tavern, many of them staples of the taverns Larry frequented in St. Louis.

“All the taverns were basically the same — they had a dart board, they had a shuffleboard table and they had some kind of bowling game,” Larry said.

Larry’s “baby” is the 1961 Chicago Coin Princess 16-foot bowling game in the back room, right next to Pop-a-Shot. “The gentleman that I purchased from told me there were less than 100 of them operating in the United States,” Larry said. The cost to refurbish the bowling game, he said, was almost as much as the cost to buy it.

There are newer games at The STL Club, too, like Buck Hunter and foosball. The plan, Larry said, is to rotate some of the games in and out depending on what members want to play. So far, shuffleboard has been one of the most popular.

The plan is to host weekly game tournaments that’ll last about an hour, open first and free to members and then for a $5 entry fee to non-members. Prizes will be gift cards to local restaurants, like La Cava, Ivan’s, Shuckin’ Shack and El Patron.

For those looking to play something without having to leave their table, there is chess, backgammon, trivial pursuit and other board games. The club also offers 24/7 trivia that customers can connect to with their phones to play with friends.

“We can have a trivia night every night,” Larry said.

For non-gamers, two big TVs hang above the bar. There will likely be plenty of St. Louis Cardinals games shown on them.

Homage to The Gateway City doesn’t stop at The STL Club’s games or logo. The walls feature St. Louis specific art, including a picture of Busch Stadium, home of the St. Louis Cardinals, and a drawing of the team’s mascot smoking a lit cigar.

While liquor, wine and beer are the focus, The STL Club has a small menu of St. Louis delicacies — all imported from the city. The star is St. Louis-style pizza. With a paper thin crust and processed Provel cheese instead of mozzarella, Larry said most people “love it or hate it.” Also available is a 10-inch bavarian pretzel, gooey butter cake and toasted raviolis like the kind you might find in restaurants on The Hill, the historic Italian-American neighborhood in western St. Louis.

Larry already accomplished a dream when he opened Shuckin’ Shack about six years ago with his son, Danny, and wife, Jill, but opening a place like The STL Club that his father would appreciate gives him a different kind of satisfaction.

“My dad would just love this place,” Larry said.

Even better, he gets to run it with his son.

“Thursday is known as father-son day,” Larry said. “It’s the one day a week just Danny and I work together.”

The tavern is currently open on Wednesday and Thursday from 5 to 11 p.m. and Friday and Saturday 5 p.m. to 1 a.m. More info about The STL Club can be found on its Facebook page.