A chance to prove herself: Webb tops all-county soccer team, looks forward to opportunity at next level 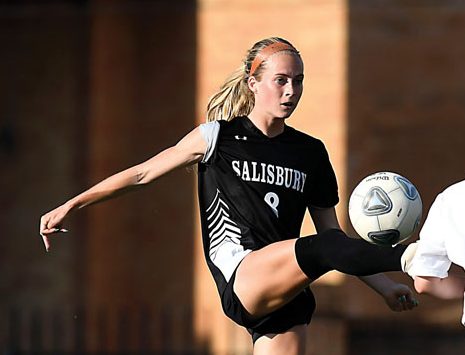 SALISBURY — As long as there’s a tomorrow, today is a starting point.

That’s the mindset forward Sutton Webb brought into her final girls soccer season for the Salisbury Hornets this spring. Three months, 17 victories and a dizzying aggregation of goals later, the May graduate has added Rowan County’s Player of the Year award to an already-distinguished portfolio.

“It’s been an honor to represent Salisbury High School,” she said during a recent, squeezed-in interview. “But honestly, it was never my intention to break all these records. At the beginning of the year, I didn’t even know the opportunity was there. I just wanted to have fun and enjoy the season.”

The list of players who had a more enjoyable 2022 season than Webb isn’t very long. She finished with 55 goals, 16 assists and a treasure trove of accolades, including repeat recognition as an all-state and all-conference player. Most recently, she secured the prestigious Central Carolina Conference female Athlete of the Year honor. In 64 matches over four varsity seasons she netted a county-record 137 goals — eclipsing the mark of 128 set by South Rowan’s Madison Henry — all while running 800- and 1600-meter races for Salisbury’s track team and, of course, sharing that sunshine smile of hers.

“It’s easy to come up with tributes that are athletically based,” said longtime SHS coach Matt Parrish. “A lot of people can conclude how good she is based on articles and snippets of news in the Post. It’s harder to know her as a person. She’s humble. Gracious. Tenacious. And she doesn’t just pick her spots because she’s always going. Her wheels are always turning. Sometimes it’s cerebral, sometimes physical, sometimes both.”

Parrish can recall his first meeting with Webb in the spring of 2019, when she arrived as a well-touted freshman midfielder. “First thing I noticed was that she’s super competitive,” he explained. “Like one of those people that no matter what game or what contest they’re involved in, their aim is to reach the upper echelon. Only she did it in a quiet, unassuming way.”

Parrish quickly learned that if you own a Van Gogh, you don’t store it in the basement. He inserted Webb as a free-wheeling striker and she responded with 43 goals in her varsity debut.

“I would have been the dumbest human being on earth if I did not put her up top,” he confessed. “We already had Lilly (Rusher) in the back, Piper (Muire) in the middle and Caroline (Cardelle) up front. But Sutton gave us the element that was missing — pace. She’s very fast, with and without the ball.”

This season Webb’s sideline-to-sideline leadership helped Salisbury compile a 17-2-2 mark, a campaign that featured a 13-game unbeaten streak before ending with a 5-0, second-round loss at East Gaston in the 2A state playoffs.

“Yeah, disappointing,” she said. “But the field was so bad, you couldn’t dribble the ball. I remember I had a chance for a breakaway and I made a touch and the ball hit a clump of dirt or something. Then it bounced up and almost hit me in the face.”

Parrish provided further insight. “When the other coach introduced himself, he extended his hand, told me his name and said, ‘Sorry about the field.'”

“There were other times when I was being marked and having a frustrating game,” Webb added. “But I was careful not to let that show because, after all, how does that help the team?”

To her teammates, Webb was always approachable and willing to brighten any situation. Listen to Hannah Schmeltzer, the goalkeeper who was part of 11 Salisbury shutouts this season:

“Parrish would always tell us these silly, dad jokes,” she said. “Some of them were pretty bad. But Sutton always had a response that made them seem funnier. ”

Schmeltzer, whose soccer career has ended, plans to study education next fall at N.C. State. She’s one of 17 Hornets who scored goals this season. “We called ourselves the Hope Crushers,” she noted. “And Sutton made us go. She gave us the hope to be the Hope Crushers. She has that winning attitude that made everyone around her even better.”

That trait will serve her well beginning July 7 when she reports to the University of Georgia, nearly two years after she verbally committed to the SEC middle-of-the-pack program. She’ll likely be moved to the back line and learn from the sideline this autumn. Undecided on a major, Webb has narrowed her choice to pre-med biology and/or sports marketing. Her down-the-road dream, like that of many others, is to play soccer professionally.

In the meantime, she’ll participate as one of 18 North Carolina high school players in the Clash of the Carolinas, scheduled June 24-25 at Wake Med Soccer Park in Cary. And she’ll continue playing pro bono for the semi-pro Charlotte Independence team in the USL W-League, a commitment that’s led to more than one hair-raising moment in the Webb household. She was even late for her recent graduation.

“I was a little late, but I wasn’t the last one there,” she laughed. “The past two weeks have just been crazy. There was one week, a playoff week, when I had five soccer games in six days. On the seventh day, I had the state meet for track.”

Rest assured, Sutton Webb will handle the future with aplomb, embracing tomorrow as it becomes today. She appears well-grounded, willing to train and eager to improve.

“All I want is the chance,” she made it known. “I’m just hoping for another opportunity to get out there and prove myself. For the time being, I’ll keep working to become the best player I can be.”