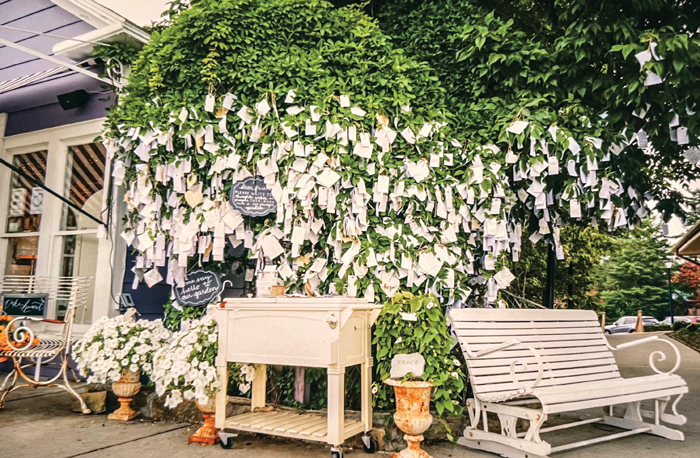 Sheri asked customers and visitors to place prayer cards on a tree beside her shop. There were 40,000 when the cards were taken down in 2019, but not one card burned when the shop caught on fire. Submitted photo.

Three years ago, on June 26, 2019, an electrical fire in the attic enveloped the tiny space in flames. It was the end of the work day. Sheri had just gone home and two employees were still there, but no one was injured.

Not one prayer burned.

There were 14,000 in place the day of the fire. When the cards were finally taken down, the collection had grown to 40,000. Sheri took down each one, in silence, prayed over them, and put them away.

They’re now mixed in with the foundation and walls of her shop, meaning she is surrounded by prayers.

Also on the walls of her dressing room are lists of names of donors who have helped her open the doors again. Some Sheri knows; some, she does not.

Matt Vincent, owner of VPC Builders, worked with Sheri on the construction project. “She was in a bad spot and went through a bad ordeal,” he says. Vincent’s company works in both residential and commercial construction, typically with much larger projects. For instance, he is now in the midst of building a car dealership.

“Sheri has been a family friend for a long time,” he says. “Blowing Rock is a small town. She was great to work with. She was always super positive and believed God would guide her through this. She had a lot of people make donations — many of them anonymously.” 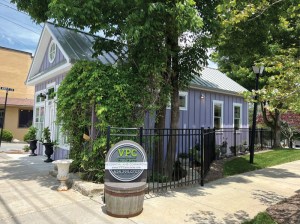 Her dear friends Lane and Fran Morton of Lexington donated the HVAC system. They own Davidson Heating & Air, Inc., and recently bought a home between Boone and Blowing Rock.

“We wanted to help in any way we could,” Fran says. “I have never met anyone like Sheri. She is the dearest soul. She never thinks of herself. She is much more a giver than a taker. We felt blessed that she allowed us to do that. She is precious. We love her.”

John and Judy Isenhour, who divide their time between Salisbury and Blowing Rock, also contributed to the rebuilding effort.

“We’ve had a home in Blowing Rock forever,” Judy says. “We are here about 85% of the time, and particularly during the pandemic. If you’re not gonna do anything, this is the place.”

Judy owned Pleasant Papers in Salisbury for 25 years, and also had stores in Blowing Rock and Concord. She retired six years ago.

“I loved every minute of it,” she says. “I don’t miss the stress of running a business, but I miss the people.”

She says she couldn’t imagine going through what Sheri has endured.

Judy has not met Sheri personally, she says. “But her business is very, very unique. It left a big void when it burned. I decided we needed to do something to help her. I felt like she needed to be here. I know she is a fine person, and we wanted to be involved in getting her back in business.”

John and Judy’s daughter, Crystal Boyd of Cleveland, also contributed to the shop and is a big fan, her mom says. “She speaks very highly of the business.”

Sheri has been working feverishly to reopen. She had hoped to do it last weekend; now she plans to open next weekend. She will honor the three-year anniversary of the fire in some way, she says.

“My store is committed to God,” she says. “We want to love people.”

One way she is doing that is to open a Garden Sanctuary just a few blocks away on Sunset Drive. The one-acre site was recently gifted to her.

“I’m definitely a person of faith,” Sheri notes. “Faith isn’t faith unless it is tested. I have been refined by fire.”

She continues, “This is a story of being restored, a picture of what restoration looks like. It’s messy, it’s chaotic, it’s confusing, and it’s isolating. Even if you have proper measures in place, what do you do at that moment?”

But Sheri had help from everyone in Blowing Rock, it seemed.

One boy set up a lemonade stand and raised $800. Two boys used their lunch money to buy candy, sold it, and gave their entire profit to Sheri.

“Miss Sheri, will this help?” they asked.

Another girl babysat and contributed.

“I was given the most extreme blessing because I did have community and my Take Heart community helping me,” Sheri says.

When Sheri does open that door, her thoughts will likely be on all the people who helped her get to that point — and that includes the Salisbury group.

“You grow good people there!” she says.

She adds, “Love will restore, and love has restored.”

Susan Shinn Turner is editor of Salisbury the Magazine.