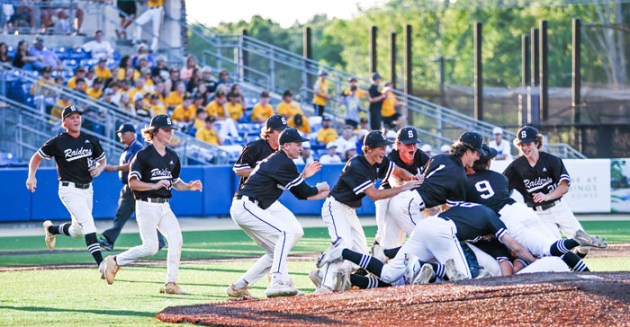 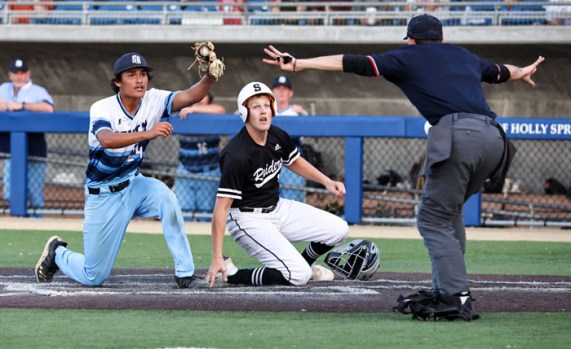 Haiden Leffew looks to the umpire for a safe call at home plate. CHRIS KRIEG/CK PHOTOGRAPHY 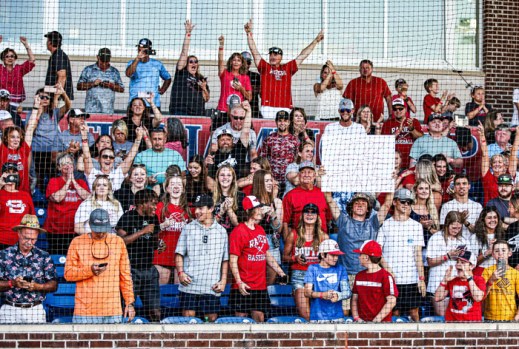 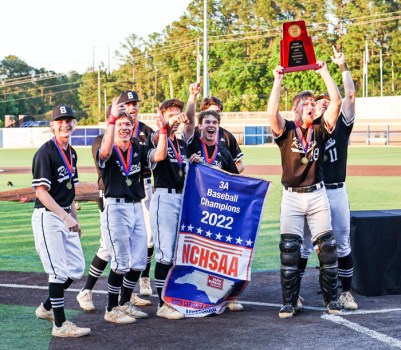 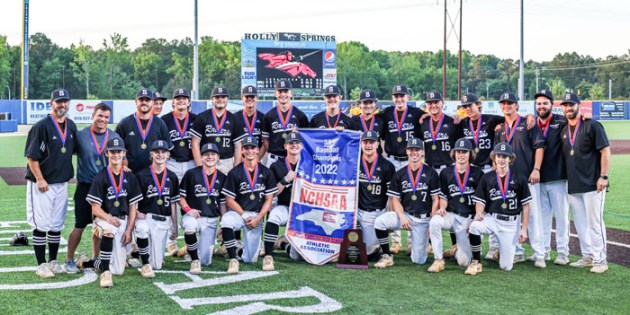 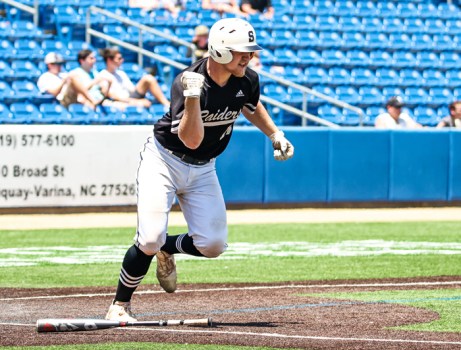 Jacob Ritchie celebrates on his way to first base after knocking in Nathan Chrismon to take a 4-2 lead. CHRIS KRIEG/CK PHOTOGRAPHY 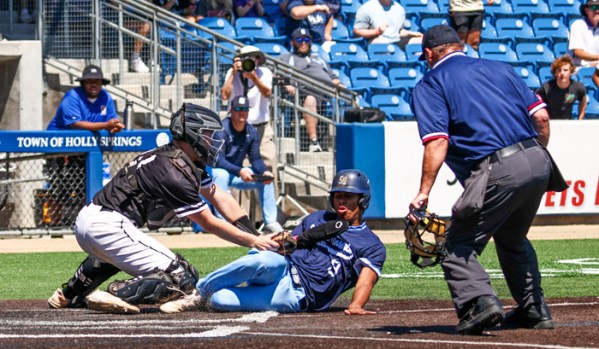 Jacob Ritchie tags out the runner at home to end the inning during Saturday's early contest. CHRIS KRIEG/CK PHOTOGRAPHY 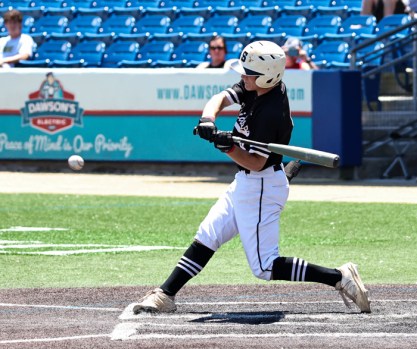 HOLLY SPRINGS  — South Brunswick had the North Carolina Gatorade Player of the Year, and junior center Walker Jenkins lived up to all the hype with breathtaking bat speed, arm strength and wheels.

But South Rowan is the 3A baseball state champion for the first time. 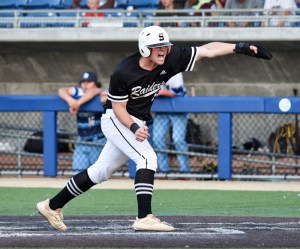 JD James celebrates scoring a run late in the final game Saturday. He was named outstanding player of the series. CHRIS KRIEG/CK PHOTOGRAPHY

First baseman JD James was named the outstanding player of the 3A State Championship Series for lashing singles all over Ting Stadium, but the Raiders got it done collectively, with a lineup and a pitching staff that fought on every at-bat.

Coach Thad Chrismon’s Raiders definitely did it the hard way, winning twice on the final day of the season against a talented team that hadn’t lost all season to a 3A opponent.  South Brunswick finished 25-5.

In the 4-2 afternoon victory, South Rowan rallied from a 2-0 deficit against future Division I pitcher Aubrey Smith.

In a wild 11-6 struggle in the nightcap, with the depth of both pitching staffs severely challenged, South Rowan rallied from a 6-1 deficit.

How the Raiders did it — double steals, errors, walks, HBPs, balks, wild pitches — mattered a whole lot less than the fact that they managed to do it. South Rowan got the biggest break of the series when South Brunswick No. 3 pitcher (and cleanup hitter) Banks Hartman exited with an apparent elbow injury after two innings. That gave South Rowan the pitching advantage and unbeaten Chandler Oddie survived a flurry of early South Brunswick hits to win one more time. Cole Thomas was great in relief for the final two innings.

In Saturday’s early game, South Rowan pitcher Carson Crainshaw was down 2-0 after Jenkins’ wheels got South Brunswick’s Cougars off to a quick start. But Crainshaw (9-1) gave up nothing the rest of the way in an efficient, pitch-to-contact performance. South got even at 2-all in the third on Nathan Chrismon’s bunt single and ringing doubles by Ty Hubbard and Haiden Leffew. Leffew’s gap shot scored two.

Kane Kepley’s double, Chrismon’s single on the ninth pitch of a tense at-bat, and Hubbard’s perfectly executed hit-and-run single through the right side, put South on top for the first time in the fifth. Chrismon’s third hit and his steal led to an insurance run on a base knock by Jacob Ritchie. Crainshaw and South’s defense, especially third baseman Colton Fisher, who made a charging play to end the third, did the rest.

That exciting win got South to a decisive third game that was played after a three-hour interval.

Smith led off the game with a homer off Oddie, who was banged around for eight hits in the first two innings. South Rowan fell behind 5-0. Oddie kept throwing.

Fisher’s run-scoring groundout made it 5-1 in the bottom of the second. South Brunswick got that run back on an RBI by Jenkins in the third, but Oddie survived a potentially deadly inning.

South Rowan stayed aggressive in the bottom of third, turning two HBPS and a double steal into a run. South Brunswick still led 6-2.

South Rowan turned a double play to help Oddie in the top of the fourth. Chrismon, the shortstop, got to a hard-hit ball up the middle, and Oddie put up his first zero.

That was a turning point. All heck loose broke loose in a chaotic bottom of the fourth. Singles by Crainshaw, James and Finch McMillin got it started for South Rowan.

Chrismon delivered another huge, extended at-bat, fighting off two-strike curveballs before finally drilling the humongous, two-run single that cut the deficit to 6-4.

There was no stopping them after that. Oddie put up another zero in the top of the fifth.

Then South got five in the bottom of the inning. Leffew scored the go-ahead run on a wild pitch. Fisher delivered a two-run single. The snowball kept rolling, and the Raiders got two more runs when Hubbard’s infield chopper was thrown away.

Thomas took the mound and put up a 1-2-3 top of the sixth, as championship dreams inched closer to reality.

South Brunswick got two hits in the seventh, but Chrismon fielded a hot smash by Jenkins for a key out, and Kepley, who had been down with an apparent ankle injury earlier in the contest, squeezed the final fly ball to put the Raiders in the history books.