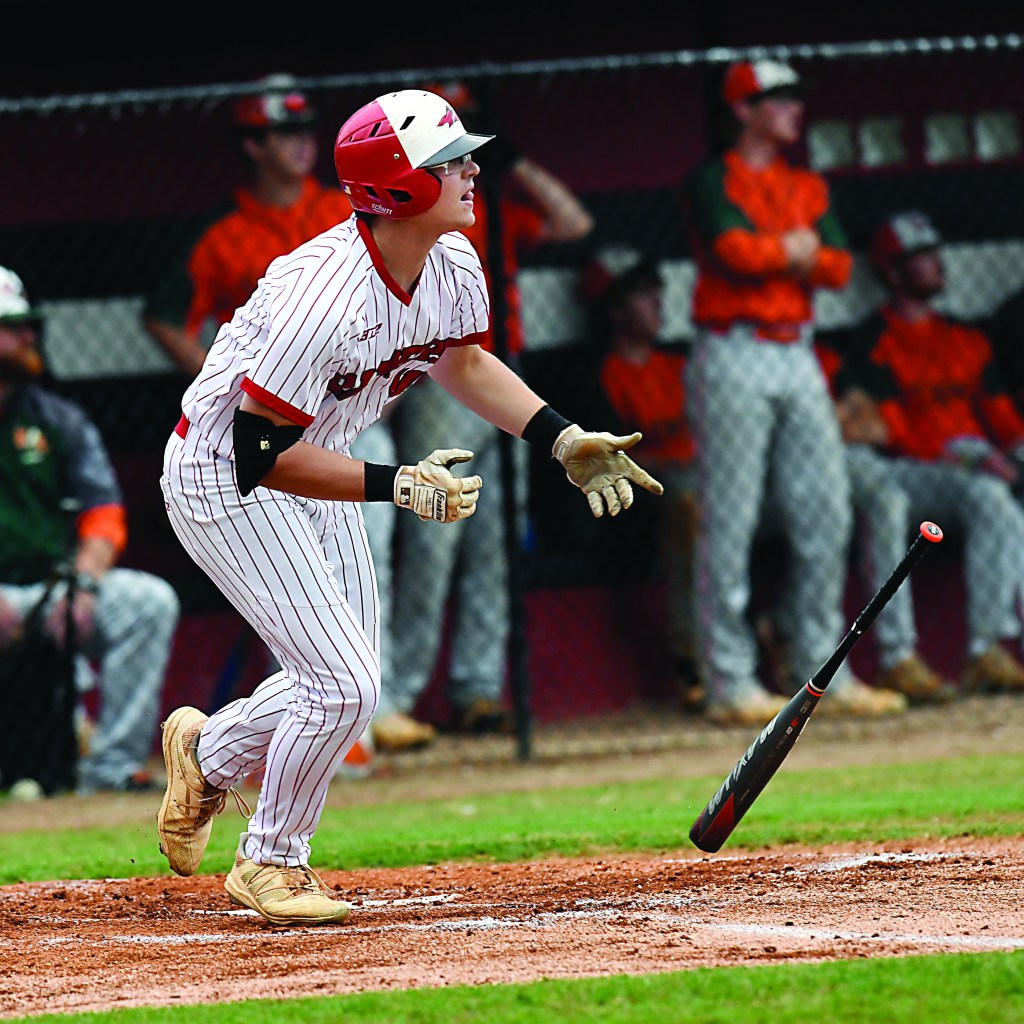 South Rowan’s win probability looked sky-high in the bottom of the third, with starting pitcher Haiden Leffew on cruise control after his first breezy tour through the South Brunswick lineup and South Rowan’s pesky hitters having their way against undefeated South Brunswick hurler Chris Burgess.

But momentum swung at Ting Stadium in the fourth. Burgess got stronger, and his teammates had increasingly tenacious at-bats. They delivered a series of clutch hits the rest of the way. Walker Jenkins, a UNC commit and the newly named Gatorade Player of the Year for North Carolina, produced the largest of those clutch hits with two outs in the top of the seventh.

South Rowan (28-6) scored two runs in the bottom of the first. Ty Hubbard crossed the plte when Jacob Ritchie’s single got past the left fielder, and Ritchie moved into scoring position for the run-scoring hit by Leffew that followed.

South Rowan executed on a double steal to make it 3-0 in the bottom of the second. South had runners on the corners after hits by JD James and Finch McMillin. McMillin swiped second to draw a throw, as James came home from third.

In the third inning, South loaded the bases with hits by Hubbard and James and a walk. Burgess was close to being knocked out, but he escaped that inning with a popup.

Leffew, a big junior lefty committed to Wake Forest, didn’t allow a hit until Jenkins beat out an infield bouncer with one out in the fourth. With two outs, Banks Hartman singled home Jenkins. That’s where the comeback began for South Brunswick (25-3).

South Brunswick inched closer in the fifth, making it 3-2 when Luke Dilgard led off with a walk, stole second and scored on a hit by No. 9 batter Patrick Boldt.

After Leffew picked a runner off first base, South Brunswick had two outs with no one on base in the sixth, but Hartman drew a walk with a long at-bat and N.C. A&T signee Jaylend Clemmons nailed one to the right-center gap for the triple that tied the game at 3-all.

South Rowan still had a great opportunity to take the game in the bottom of the sixth. James singled for his third hit. With one out, McMillin was hit by a pitch. Kane Kepley’s single loaded the bases for two hitters who have come through so often over the last four seasons.

But it didn’t happen for the Raiders this time. Nathan Chrismon bounced softly back to Burgess for a forceout at home. Then Hubbard popped up. It was still 3-all.

South Brunswick got the first two batters on in the top of the seventh with a walk and a hit batsman. Leffew stuck out the next two, raising his total for the game to 10.

Leffew had the advantage of the lefty-on-lefty matchup. He also knows Jenkins very well as his teammate on the South Charlotte Panthers.

Leffew got two strikes on him, but Jenkins won the battle with a solid single up the middle.

South Rowan had nine hits but left 10 on base and now has to regroup.

Game 2 of the best-of-three series is scheduled for Saturday at 11 a.m.

South will send out right-hander Carson Crainshaw (8-1). It will not be an ideal matchup for him against a lineup loaded with lefties.

Right-hander Aubrey Smith (11-1) will get the call for South Brunswick.

If a third game is needed, it will be played at 5 p.m.