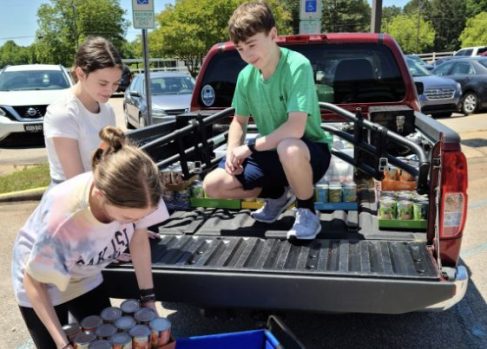 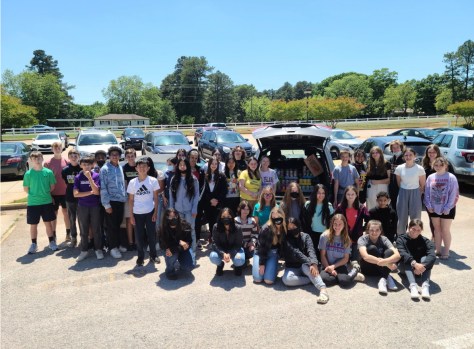 Submitted photo - The Southeast Middle Honor Society with a load of donations.

SALISBURY — Southeast Middle School students collected cash and almost a ton of food to make a difference for Rowan Helping Ministries as classes wrapped up in May.

Southeast Middle teacher Jessica Potts said the school’s honor society usually tries to complete a service project every year, but this is the first time since the COVID-19 pandemic began.

Students were allowed to pick who they would benefit and easily landed on Rowan Helping Ministries. The nonprofit provides a mix of services to people in need, including shelter, food, housing assistance, clothing and connecting people with resources.

“When we inducted our new members we talked about what we were going to do to give back to the community,” Potts said.

The conversation focused on how the group would collect donations for the nonprofit. They decided to collect donations through competitions in the school’s home rooms and planned a dance on May 13. Instead of an entry fee for the dance, students were asked to bring three nonperishable food items for the drive.

“It just made me feel really proud to see my students giving back to the community they live in,” Potts said. “It made me really proud of all of them.”

Kelsie and Ashley Myers, twin eighth graders at the school, helped collect and sort canned food for the drive. They said the donation to RHM filled several cars.

“It made me and Kelsie hopeful it would make a difference in someone’s life,” Ashley said. “It’s kind of like a blessing.”

Kelsie said it felt good to help people. “We’ve done this before, it wasn’t at our school, but we never had so many cans,” Kelsie said. “We are thankful that we had a great support group with our honor society. Our honor society is pretty cool, I will say.”

She said she wanted to give credit to the entire honor society and the entire experience was fun for the group.