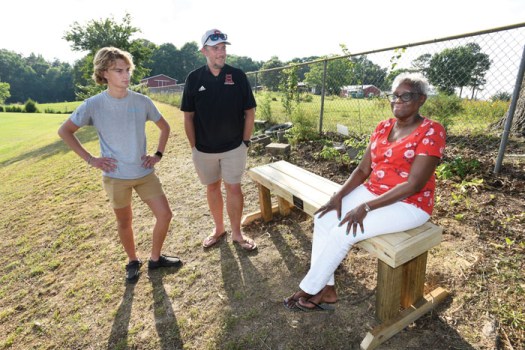 Annie Littlejohn sits on the bench constructed by South Rowan football player and senior Noah King, on the left. Current football coach Chris Walsh joins in the honoring of the late Joe Lewis Littlejohn, who was a familiar figure at practices and games. photo by Wayne Hinshaw, for the Salisbury Post 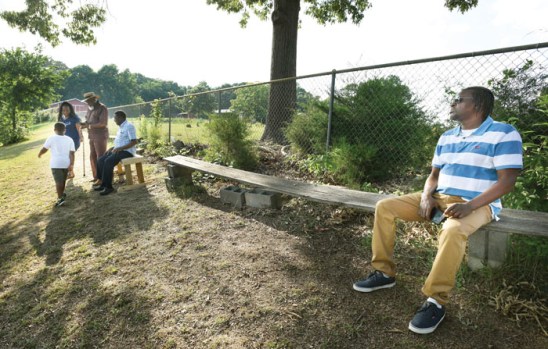 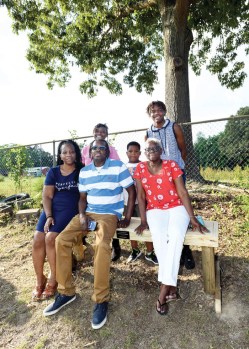 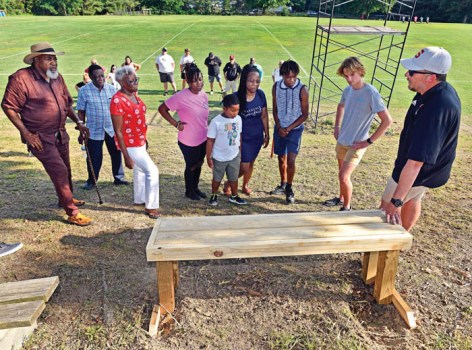 South Rowan High football Coach Chris Walsh on the right and player and graduate, Noah King, second from the right stand looking at the bench that King constructed in honor of the late Joe Littlejohn who came to all the South football practices to watch. Members of the Littlejohn family are in front. photo by Wayne Hinshaw, for the Salisbury Post

The name plate on the bench honoring the late Joe Lewis Littlejohn for being "A True Raider" fan., photo by Wayne Hinshaw, for the Salisbury Post

King won quite a few tennis matches for the Raiders, but this was the first and only touchdown of his varsity football career.

“So I scored in the Carson game and I’m looking up in the stands for my mom, and the first thing I see is Mr. Littlejohn jumping around and hollering,” King said with a smile.

Joe Lewis Littlejohn couldn’t have been any more excited if his own grandson had scored.  If you wore the red and black, you were family to Littlejohn.

“Such a supportive guy,” South head football coach Chris Walsh said. “There are so many ups and downs that you go through as a coach, but he was a constant from the first day I met him. He welcomed me from the start. He was always encouraging, always so positive.”

Littlejohn died at 73 on Feb. 7, about three months after he celebrated King’s touchdown. That ended his undisputed run of decades as South Rowan’s No. 1 football — and basketball — fan.

Why Littlejohn became such an ardent supporter of South Rowan athletics isn’t known for certain, although one former South coach passed on the story that a South faculty member once wrote a glowing recommendation for Littlejohn that helped him when he was in the service. Maybe that was it. Whatever the precise explanation is, no one loved the Raiders like Littlejohn did. That was a fact.

“We went to Aggrey Memorial (the school for Black students in southern Rowan during segregation) together and then we went to South Rowan together,” said long-time friend and teammate Stanley Haley. “I’m a South fan and I buy season tickets and go to the games, but Joe Littlejohn was something different. He was a diehard Raider fan. He loved South Rowan more than anything. He wore South Rowan gear all the time.”

Ernie Faw was a football teammate of Littlejohn’s at South.

Faw could long-snap, an unusual skill that got him promoted to the varsity as a sophomore in the fall of 1967. Littlejohn was a senior offensive lineman, so he took Faw under his wing. They became friends for life.

“Joe was this big, husky, tough kid and was one of the handful of Black players that we had in ’67,” Faw said. “He was a true friend and he was a leader. I don’t know if linemen can ever be stars, but Joe was close to that. Joe was good.”

Not long after he graduated from South in 1968, Littlejohn got his draft notice from the U.S. Army. He served with distinction in Vietnam, returning home with a Bronze Star and Purple Heart.

He stayed in the Reserves, went to work in the mill, married Annie Propst and became a community leader in Rose Hill, a tight-knit Black neighborhood situated between Landis and Kannapolis. The athletic fortunes of A.L. Brown and South Rowan sometimes depended on where the Rose Hill youngsters enrolled.

“Joe was a friend to all the South players and coaches, and he was especially a great advocate for the Black players,” Faw said. “He was a voice for Blacks at South, He’d load a bunch of Rose Hill kids up in his truck every day and bring them to South to practice, and then he’d take them back home. I can’t tell you how much he helped South football.”

Of  course, Littlejohn’s own sons, Trent and Travis, played for South. And then his grandchildren wore the red and black.

Every practice. Every game. Always there.

“He got those season tickets for football and for years and years he’d sit to the left of (longtime coach and AD) Larry Deal,” Haley said. “On the 50-yard line, five rows down. And winning by 50 or losing by 50, you knew he would still be in his seat until the game was over.”

When King arrived at South as a freshman, he was puzzled, at first, by the old guy who sat and watched South Rowan practice on an isolated field that’s a pretty good hike from the school.

“I wondered why someone would sit out there in the heat in July and August, just to see us practice, and they explained to me that was Mr. LittleJohn,” King said. “I realized who he was then. I knew his family. My mother had taught some of the Littlejohns.”

Littlejohn would come to know King by name and face as well as number. That’s how it was with all the Raiders.

“He spoke to me a few times,” King said. “Just told me to keep working.”

Littlejohn was an equally avid fan of South basketball.

“He spoke to our team a few times, really spoke from the heart,” said former South basketball coach John Davis. “If you wore the red and black, he supported you 100 percent, but he also held you accountable. He would tell you what you needed to hear, even if it wasn’t necessarily what you wanted to hear. I remember the last game I coached the South girls (2018) and we lost a close playoff game up at North Wilkes. Joe Littlejohn made the trip up there. He knew it was my last game, and he came up when it was over and hugged me . I cried, and he cried.”

Walsh was named South’s new football coach in May 2021. The program had been struggling for years, and there would certainly be more struggles ahead. Littlejohn let Walsh know from the first day that he had his full support, win, lose or draw.

“It was inspiring to meet someone to care as much as he cared about the success of the team,” Walsh said.

The paths of Faw and Littlejohn crossed at a lot of ballgames,

They crossed for the final time when Faw’s daughter was in the hospital with COVID. Faw saw Mrs. Littlejohn bringing her husband in.

Littlejohn’s death over the winter hit a lot of Raiders and Raider fans hard. No matter how bad things got, they knew Littlejohn was going to be in his seat. He was a rock to lean on during the leanest times.

That something turned out to be a new bench to replace the ancient one where Littlejohn had watched South’s football team practice for decades on those hot summer days.

“That bench had gotten kind of old and decrepit,” Walsh said. “Noah King is really great in shop class with wood work, so he was our guy. We gave him the funds to get what he needed to build Joe Littlejohn the best bench in the world.”

One trip to Lowe’s later, and King was hard at work on the project. He just finished work on his Eagle Scout, and he graduated. But he spent hours on doing everything he could to make sure the new bench was just right. He wanted it to be perfect.

Walsh says he exceeded all expectations. When King delivered his project, he was blown away.

“For a senior, with everything he had going on, to still put that kind of effort in during his last few days of high school, that tells you a lot about who Noah King is,” Walsh said. “That’s what being a Raider is all about.”

The Raiders gathered on Wednesday evening, out at the practice field, and they dedicated the new bench to Joe Littlejohn.

For all his years of unconditional love and support, they gave a little something back.

He’ll be in the shade and he’ll have the best seat in the house.

“He was a grandfather to every kid in our program,” Walsh said. “He’ll be remembered.”