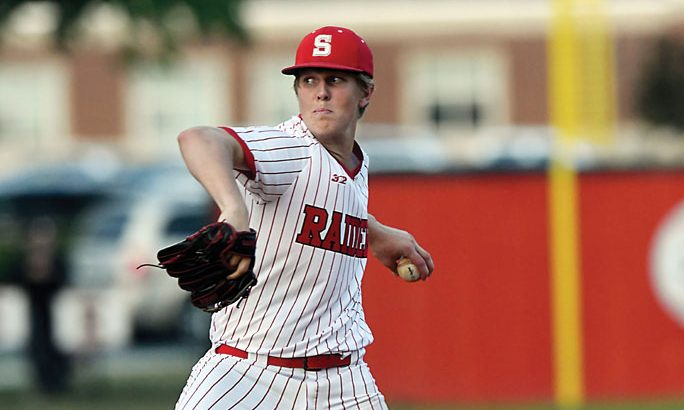 South lefty Haiden Leffew will be on the mound at Wake Forest University next. File photo by Wayne Hinshaw, for the Salisbury Post

LANDIS — No one said it would be easy.

To win the 3A State Championship Series and cap a dream season this weekend, South Rowan’s baseball team has to overcome one more formidable opponent.

The South Brunswick Cougars (24-3) have a junior who is rated as one of the top five players nationally in the Class of 2023.

They also have three senior Division I signees.

Walker Jenkins is the junior center fielder. He’s Corey Seager-sized (6-foot-3, 210 pounds), exceptionally fast and has been known to throw 93 mph bullets from the outfield.  A lefty power hitter, he has demonstrated the sort of bat speed that gets guys drafted in the first round.

The Raiders likely will take the same approach against Jenkins, a UNC commit, that they did against East Lincoln masher Garrett Michel in the West Championship Series. Haiden Leffew. a lefty who can throw in the 90 range, probably will try to get Jenkins out, while South’s low-80s right-handers Carson Crainshaw and Chandler Oddie will pitch around him.

East Carolina recruit Cameron Burgess is another tall right-hander. He’s 7-0 with an ERA of 0.97. He’s also a slugging third baseman when he’s not on the mound. He’s batting .412 with four homers and 34 RBIs.

The other South Brunswick D-I signee is outfielder Jeyland Clemmons, who is headed to North Carolina A&T. He doesn’t have huge stats, but he passes the eye test at 6-foot-3, 180 pounds.

South Brunswick has a five-man pitching staff, but the anchors are Smith and Burgess. That’s who South Rowan will see, in some order, in the first two games,

If you’re wondering who beat these guys, all three SB losses came in conference play. That’s a mixed 3A/4A league in the Wilmington area. The three setbacks were to 4As. Two were to Hoggard, one of the best 4As.

While South is 28-5, the Raiders, coached by former UNC reliever Thad Chrismon, are even better than that sounds. Only two of those losses were by the three primary pitchers. Leffew is 10-1. Crainshaw is 8-1. Oddie is 7-0 with four saves.

Leffew is a junior Wake Forest commit. He was expected to be really good this season. He hasn’t disappointed.

What’s pushed South from the very good team of 2021 to the historic team of 2022 has been a return to health by Crainshaw and the development of Oddie. No one could have predicted 15 wins from those two guys back in February.

Liberty signee Kepley and East Carolina signee Chrismon lack the size of standard D-I signees, but they’ve got everything else. They’re exceptional at getting on base, they can defend with the best, and they can run. Hubbard, a Catawba signee, is a terrific lefty contact hitter, and is swinging a very hot bat right now.

While South’s lineup starts off 5-foot-7, 5-foot-9, 5-foot-11, there are some strapping guys in the middle of the lineup. Cleanup-hitting catcher Jacob Ritchie is batting in the .400 range, as are the three guys who swing in front of him. Leffew, Crainshaw and first baseman JD James are big guys with extra-base power.

Third baseman Colton Fisher and right fielder Finch McMillin round out the lineup and both were good in the West Championship Series. South Rowan got some offense from every spot in the batting order against East Lincoln. The Raiders had 36 hits in three games.

This weekend’s games are set for Ting Stadium, located in Holly Springs, about 18 miles southwest of Raleigh.  Ting Stadium has a synthetic turf field, seats 1,800 and boasts a state-of-the-art scoreboard.  “Ting” is a mobile and internet service provider that secured the naming rights to the park and stadium.

South Rowan fans actually will have a shorter drive (about 130 miles) than South Brunswick fans will have from the coast.

The schedule calls for a 5 p.m game on Friday and an 11 a.m. game on Saturday. If a third game is necessary to decide the series, it would be played at 5 p.m. on Saturday. The 1A State Championships also are being played at Ting Stadium, and there would be a 1A game at 2 p.m.

Tickets must be purchased online through GoFan. Go to the NCHSAA web site. Tickets can be bought today for the series for $20, plus a service fee. Tickets for Friday are $8. Tickets for Saturday are $12.

Be prepared for cashless concessions. You’ll need to use a credit card or debit card.