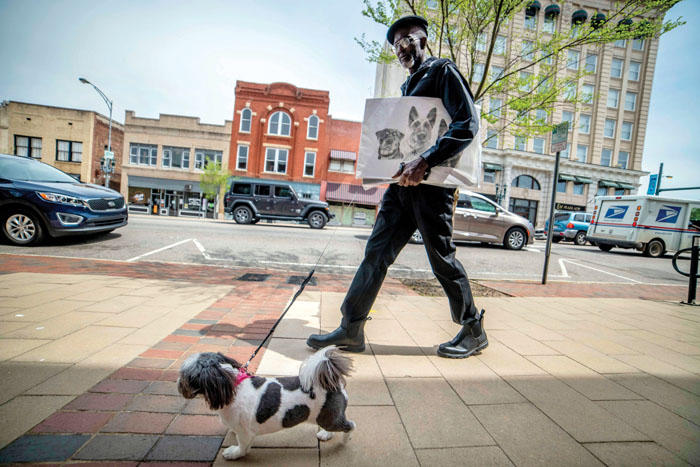 Joe Heilig helps Timeless Wigs owner Dileika Wilson-Ballard by taking her dog Halo Sophia for a daily walk. Salisbury street artist Joe Heilig is an integral part of life in downtown Salisbury. Along with his interaction with pedestrians passing the bench where he works, Heilig benefits from downtown store owners that completes the symbiotic relationships. Salisbury NC 4/13/21 JON C LAKEY/FOR THE SALISBURY THE MAGAZINE.

SALISBURY — Whenever an out-of-town visitor walked into his store, Fine Frame Gallery co-owner Bruce Wilson made sure to alert their attention to the striking figure sitting on the other side of Main Street.

“If you go across the street, say hi to Joe,” Bruce would tell them.

More likely than not, Joe would say hi to them first.

With his spindly, 6-foot-6 frame draped over the bench outside Fullers Market/Ultimate Sports Apparel, Joseph Heilig made conversation with anybody and everybody who happened to pass by. If the bespectacled, gray goateed man wasn’t drawing people in with his voice, he was doing it with his artwork — realistic renderings of people, pets and places, sketched and shaded with graphite pencil.

“We called him our Salisbury sidewalk artist,” Bruce said.

Joseph Heilig, a friend to many and a downtown institution for close to a decade, died at the age of 65 on Saturday.

Around 11 a.m. most mornings, Justin Wells could expect his shop’s front door chime to start ringing. Into Fullers Market/Ultimate Sports Apparel would stroll Joe, ready to get his day started with a cup of coffee. He alternated between caramel and french vanilla.

After getting his daily cup, Joe would park it on the public bench and set up his sidewalk studio. He’d get out his art supplies and prop up a few portfolio pieces, turn the volume up on his mobile speaker and get to work.

In a 2021 interview with former Salisbury Magazine editor Mark Wineka, Joe explained that “if construction people, firemen, mailmen — if they can all do outside work, I can do outside work, too.”

Joe appeared on his bench every day of the week except Sunday. Only downpours or exceptionally hot weather kept him away.

“For the most part, if it wasn’t pouring rain, he was out there,” Wells said. 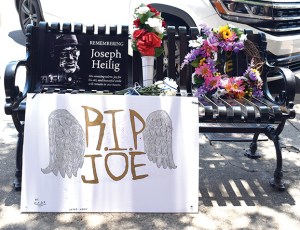 In the days since Joe Heilig’s passing, the bench where he completed most of his artwork has been covered in memorials. Ben Stansell/Salisbury Post

“His thing was, this is my spot, this is where everybody knows they can find me,” Wells said.

The bench was where Joe, who almost always worked from a photograph, met customers to pick up the picture they wanted him to recreate in pencil. It was also where he’d met them to drop off finished pieces. And it was where he did most of his actual sketching — unless he got distracted.

“Most days he would draw, but at the same time he wanted to talk to everybody. So, he did a lot of starting and stopping,” Wells said. “He just liked to talk to people, so he’d get sidetracked with a 20-minute conversation pretty easily.”

Dileika Wilson-Ballard, one of Joe’s closest friends and owner of downtown’s Timeless Wigs and Marvelous Things, said Joe enjoyed being a street artist because it allowed him to interact with people.

“He loved to do his art outside,” she said. “The communal part was a huge part of it for him. When the weather wasn’t good and he couldn’t come out, it took something out of him.”

Joe didn’t care what the topic was — he would talk about anything. Never shy about his opinions, Joe would even engage in political discourse, sometimes dipping into hot button topics.

“He loved to be controversial at times,” Wilson-Ballard said. “We had opposite politics, so we just agreed to disagree. He was a Trump fan. He watched conservative news. He loved to have those conversations out there on the bench, but he had a heart for people.”

Joe enjoyed talking to people and he also loved making them happy through art. His favorite part of the process, Wilson-Ballard said, was watching customers react to a finished piece.

“It was the detail in his work that amazed people,” she said.

Joe’s artistic talent was apparent even when he was a child, growing up in Queens, New York. His brother Bernard, two years Joe’s junior, remembers taking note of his older brother’s skill.

“You know how kids get coloring books and draw and scribble outside the lines and all that?” Bernard said. “(Joe) would make perfect pictures.”

Joe wasn’t just good at art as a kid, he was serious about it, too. Wilson-Ballard remembers Joe telling her about the time he got in trouble for hiding his crayons, worried that other children would wear them down.

When he was a young man, Joe attended an art school in New York for some time. But that’s about as much of a formal art education as he ever received. Art wasn’t a career for Joe until after he moved from New York to Salisbury around 1999. He chose Rowan County because it’s where his mother’s family was from and he still had family connections.

Bruce and his wife Jackie, co-owner of Fine Frame Gallery, helped foster Joe’s artistic career by giving him some supplies. When Joe finished a piece, he’d bring it to Fine Frame Gallery to have the shop put a board behind it and wrap it in plastic for the customer.

“He helped a lot of people preserve their memories,” Bruce said. “And that’s what we do here.”

Early on when Joe was sharpening his drawing skills, Jackie said he’d visit the public library and practice recreating pictures from the encyclopedia. His commitment to his craft paid dividends. Both Bruce and Jackie were impressed with how much Joe improved over the time they knew him.

“He really grew as an artist,” Jackie said.

Joe was good enough to make a living on his art, something not all artists can say. While there were times when Joe was in between housing, it was not for very long. He worked hard to pay his bills through art, Jackie said. “He drew for his supper,” Bruce added.

No matter his living situation, Joe always dressed well. He usually wore a fashionable hat like a beret or fedora. Bow ties were a staple of his wardrobe and he rotated through several suits. To celebrate the Cheerwine festival several years ago, Joe paired a red Cheerwine T-shirt with shiny red and white wing-tip shoes, an outfit Bruce still admires to this day. 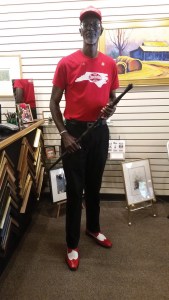 Joe Heilig was known for his fashion sense. In this photo, he’s posing in Fine Frame Gallery in an outfit he put together to celebrate the Cheerwine Festival. Photo submitted by Jackie and Bruce Wilson.

Almost always, Joe displayed both an American flag and City of Salisbury pin on his lapel.

“He was so prideful of his community,” Bruce said. “He wore that Salisbury pin like a city council person.”

The bench outside of Fullers Market was Joe’s spot, but if he wasn’t there, he was likely walking Wilson-Ballard’s dog, Halo, around downtown.

“People know Halo from her being with Joe,” Wilson-Ballard said.

Whether he was on his bench or walking Halo, Joe played music constantly.

“He was serious about his music,” Wilson-Ballard said.

“You would catch him on the sidewalk when he was in a really good mood and he would get someone to dance on the street with him,” Wilson-Ballard said.

Like many of Joe’s downtown friends, Wilson-Ballard is still processing the loss. She’s found comfort in knowing that Joe’s legacy will live on in the memories he’s memorialized for others through his artwork.

Wells knows that mornings at Fullers Market won’t be the same.

“It will definitely be different. It’ll take a little bit,” Wells said. “It was so routine for us to every morning hear the door ring and there was Joe.”

When Bernard talked to Joe several weeks ago before coming down from New York to visit him for the first time in years, he said Joe sounded great over the phone. But Joe’s health seemed to take a turn for the worse sometime late last month. He was hospitalized last week and underwent surgery on Wednesday. Wilson-Ballard said Joe appeared to be recovering before suddenly regressing on Saturday evening.

“He just went downhill from there,” she said.

When news of Joe’s passing spread on Monday afternoon, people started covering his bench with bouquets of flowers. On a large white canvas propped against the seat, someone wrote “R.I.P Joe” between angel’s wings.

On Tuesday morning, Wells attached a poster featuring Joe’s face to the seat. A message on the poster reads: “His amazing talent, joy for his art, and beautiful smile will remain in our hearts.”

Wells and other downtown merchants hope the temporary memorials will eventually be replaced by a permanent plaque.

The outpouring of love for Joe has been comforting to Bernard, who is working to make arrangements. To pay for the significant cost of Joe’s hospitalization and funeral expenses, Bernard has set up a GoFundMe page. Those who wish to donate can visit https://gofund.me/f3c5b8f1.

Alissa Redmond, owner of South Main Book Company, hopes people will give to the GoFundMe in honor of Joe and the impact he had on downtown Salisbury.

“Joe was a great reader and thinker,” Redmond said. “He was incredibly original, and certainly deserving of a lasting tribute on his bench. But before we think about a fitting memorial for him on Main Street, I hope people reach out to his family through their fundraising campaign, as his hospitalization and funeral expenses are substantial.”