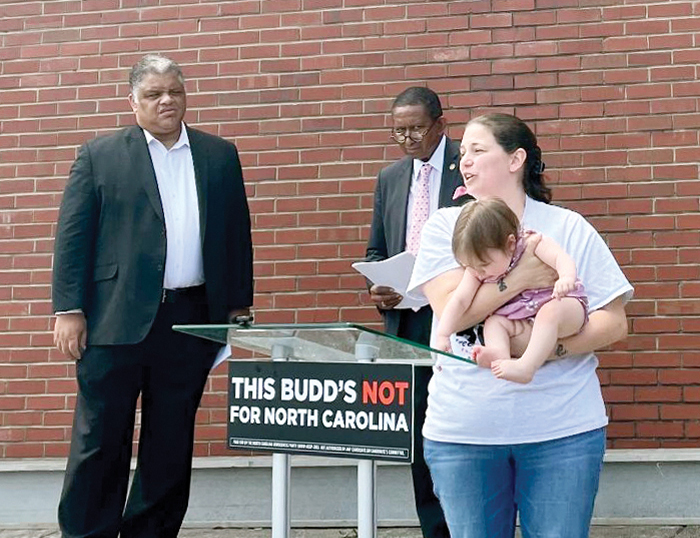 Members of the North Carolina Democratic Party and constituents of Rep. Ted Budd held a press conference outside his Asheboro office Wednesday morning. Deborah Napper, a mother to four children, one an infant, was unhappy that Budd voted against $28 million in aid to the FDA to address the shortage. — Submitted photo

ASHEBORO — Members of the North Carolina Democratic Party (NCDP) held a press conference outside the office of Rep. Ted Budd (R-NC) Wednesday morning, chastising him for his vote, along with 191 other Republicans, against a proposal to give $28 million in aid to the Food and Drug Administration to address an extreme shortage of baby formula.

In fact, the entire North Carolina Republican U.S. House delegation voted against the Infant Formula Supplemental Appropriations Act, according to the NCDP.

The bill “provides appropriations for the FDA to address the current shortage of FDA-regulated infant formula and certain medical foods in the United States, and prevent future shortages, including by taking the steps that are necessary to prevent fraudulent products from entering the U.S. market.”

In response, Republican women in the House introduced a competing measure called “Babies Need More Formula Now,” which would make it easier for American parents to get formula from abroad.

NCDP First Vice Chair Floyd McKissick joined Budd constituents Clyde Foust of Randolph County and Deborah Napper of Greensboro, mother to four children including an infant, as they stood outside Budd’s Asheboro office to call out the GOP U.S. Senate candidate for voting against the emergency FDA funds.

“As a mom, I will do anything to make sure my kids have food to eat and a roof over their head,” Napper said. “My family has the resources to pay the extra cost to find what our daughter needs, but not every family is that lucky. It is terrifying to know that we could run out of formula or have to ration what we do have. It’s also bad enough to search several stores to find what we need to keep my baby healthy and full because Ted Budd and Republicans are pointing fingers instead of taking action. North Carolina families need a change.”

“It is appalling that my own Congressman is more interested in using North Carolina families’ struggles for his own political gain,” Foust said. “Because of Ted Budd’s vote against this bill, many families across North Carolina, low-income families and Black and brown mothers, will continue to be particularly hard-hit by the infant formula shortage.”

Budd did vote for a second measure, the Access to Baby Formula Act, which authorizes regulatory waivers under the Special Supplemental Nutrition Program for Women, Infants, and Children (WIC) during national emergencies and supply chain shortages.

He did not return a call requesting comment for this article, but has previously said “I was proud to vote to loosen federal restrictions for families to get formula for their infants and prevent future supply chain disruptions.”