The man with the horn: Sergeant continues to honor the fallen 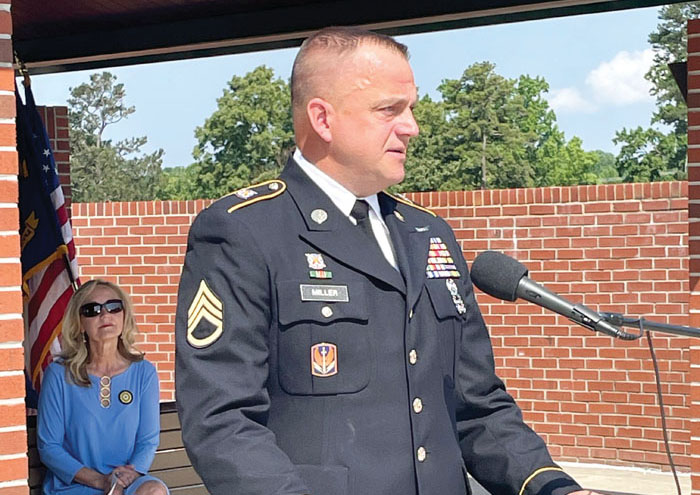 SALISBURY — Brett Miller joined the military at 17, signing a check payable to the United States for the sum of “up to and including my life.”

His check has not, to date, been cashed, but at Monday morning’s Memorial Day ceremony, he stood as guest speaker to firmly remind the community of those whose checks have been cashed, and whose lives stopped the moment it was presented for payment.

“I was supposed to cry at the end of today, not at the beginning,” he said when introduced by Martha Corriher, American Legion Auxiliary Unit 141 president. “I am just a common man, no one special, but I am honored to be here.”

A former Marine and current member of the National Guard Aviation Regiment in Salisbury, Miller is one of six children — two boys and four girls — and the third generation in his family to enlist.

“Maybe there will be a fourth, my children are here today,” he said. “Right now, that check I signed still belongs to Uncle Sam, so you never know. But if I am lucky, that check will be returned to me and I can mark it void, retire and live a quiet, peaceful life. Unfortunately, for so many, that check was cashed. That’s why we have Gold Star families. And those are the strongest families you will ever find.”

For more than seven years, Miller was part of the team that fired the gun salute and played Taps at veteran funerals. He not only played the bugle, but folded flags to be handed to wives, mothers and fathers, children, those left behind, and helped carry the caskets of those who had served to their final resting place.

He was adamant that each performance be the best. And he considered every moment of it an honor.

“We would show up, and people would say ‘what do we need to do for you?’ And I would always say, ‘Man, just open the door and get out of the way, because the train’s coming,'” said Miller. “You get one chance to get this right. One chance. Anything less than perfect is a failure. A failure for the family and for the veteran.”

Originally proclaimed in 1868, Memorial Day, or as it was originally named, Decoration Day, has always been a day to remember those who died in service to their country, whether during actual combat or long after active service.

“The day was originally spent with picnics at the graveside of the fallen soldier,” said Miller. “We’ve kept the picnic part, but forgotten the important part of honoring fallen heroes. So go ahead and have the picnics, the barbecues, the family gatherings. Just take time to remember the people who have had those checks cashed. It is not a day to mourn, but a day to celebrate a life well lived, as hard as that can be sometimes.”

Miller noted that some have “cashed their own checks,” and he hopes that those struggling now, or who will struggle in the future, will reach out to other veterans.

“Seek out other, older veterans and talk with them, ask them about their stories and tell them yours,” he said. “They understand all you have been through, physically, emotionally, mentally, and they can help you learn to cope and adjust. Join organizations that support us. But for heaven’s sake, don’t cash your own check. Let someone else hold it until you are whole again.”

He thanked family members who “serve alongside us.” They are the ones who manage the day to day operations at home, who take care of all the things life brings while a soldier is away.

“Whenever the world calls, the United States military always answers,” he said. “But freedom will always exact a cost. That means this is the most expensive holiday our country has. Because it doesn’t just cost money — it cost lives.”

Miller closed his comments with the poem “Live Your Life” from Shawnee  Chief William Tecumseh: “So live your life that the fear of death can never enter your heart. Trouble no one about their religion; respect others in their view, and demand that they respect yours. Love your life, perfect your life, beautify all things in your life. Seek to make your life long and its purpose in the service of your people…When it comes your time to die, be not like those whose hearts are filled with the fear of death, so that when their time comes they weep and pray for a little more time to live their lives over again in a different way. Sing your death song and die like a hero going home.”