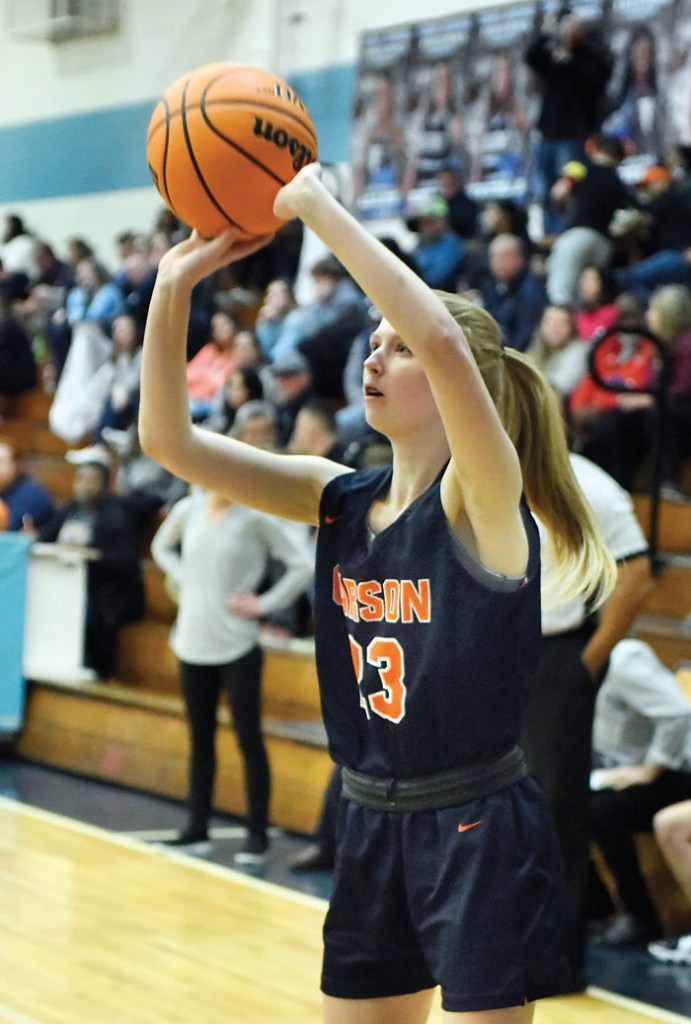 Carson’s Hannah Isley shoots during a game against West Rowan earlier this year. Isley will continue her basketball career at Pfeiffer. photo by Wayne Hinshaw, for the Salisbury Post

CHINA GROVE — Carson graduate Hannah Isley always did it quietly, so it may come as a surprise that she finished eighth in career scoring for the girls basketball program with 867 points.

“She doesn’t say much, but there’s a toughness about her that you love and respect and trust,” Carson head coach Brooke Stouder said. “We knew we could count on her best every single game.”

On the list of all-time Carson scorers, the 5-foot-8 Isley slid in there between former teammate Ellie Wilhelm and Carson assistant coach Chloe Monroe, which is pretty good company.

Isley doesn’t appear to be amazingly quick, but she’s a smooth, focused athlete. She’s No. 1 on Carson’s goal-scoring list for soccer. She had a furious finish on the pitch, totaling 12 goals in two dominant matches late in the season to earn statewide recognition from MaxPreps. She finished her senior season with 29 goals and her career with 73.

But it’s going to be basketball for Isley at the next level. She recently announced she’s headed to Pfeiffer for more hoops and more education. That’s where Stouder played ball and earned a degree a while back. Isley will join her twin sister, Riley, a Pfeiffer tennis recruit.

“Hannah is excited and Pfeiffer’s coaches are excited,” Stouder said. “She understands what it takes to compete at a high level. I believe she can be an impact player for them.”

Isley was a winner.

Graduation losses were heavy after the state championship, and the Cougars were expected to be average in 2021-22.

But they were far from average. Mary Spry and Isley led an inexperienced team to 25-4, more championships and three state playoff wins.

Isley led the Cougars with 80 deflections and took 12 charges.

She averaged 14.3 points on 43% shooting and pulled down 6.3 rebounds per game for all-conference and all-county honors.

She made 47 3-pointers. When teams played her to drive, she made 3s. When teams player her as a shooter, she was tough enough to drive. She also got more than her share of points by running the floor in transition.

She scored in the 20s six times as a senior and reached double figures 21 times.

“She hurt our opponents in a lot of different ways,” Stouder said.

Isley should be able to help right away.