A walk to remember: Veteran carries large flag in honor of those lost 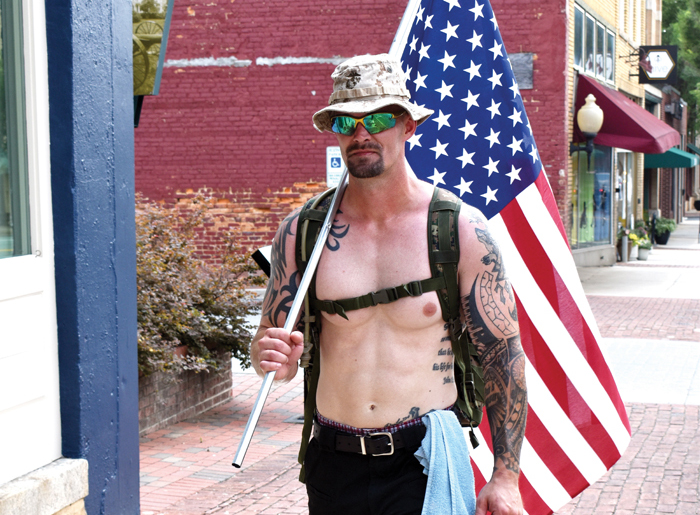 Daniel Lamont of Salisbury joined the Marines in 2007, and was twice deployed to Afghanistan. He lost 17 fellow soldiers in that conflict. This Memorial Day, he walked seventeen miles, carrying the American flag, from his home to Main Street and back to honor those fallen soldiers, and all others who have served and not come home.

SALISBURY — Just after noon on Monday, Memorial Day, a fit young man wearing fatigues and a back pack, carrying a huge American flag, strode up Innes Street toward Main Street, his step confident, his eyes ahead, his back straight.

Daniel Lambert of Beagle Run, Salisbury, set out about 10 a.m to walk the 17-mile round trip from his home to Main Street and back. The sun was hot already, and he took along a hand towel to wipe away the perspiration. But he was determined.

Lambert joined the Marines in 2007, and did two tours in Afghanistan, both lasting the better part of a year.

He is now a civilian, but those years of service never leave him.

During the deployments, he lost 17 members of his company.

“I had hoped to do this walk in their honor for a couple of years, but things kept getting in the way — work, COVID,” said Lambert. “This year, things finally came together and I was able to do it.” Lambert grew up in Stanly County, where his parents still live. He moved to Salisbury in 2015, and has made friends here, but misses his family at times. He said his parents, while proud of him and his decision to honor his fallen comrades, worried about his safety.

“They want to be sure I’m OK, especially on roads where there’s no sidewalk, but they’re proud of me, too,” he said. “When I was just getting going this morning, one of my neighbors came out and brought me a bottle of water and thanked me. A lot of people have honked horns and waved driving by.”

Lambert said he hopes to repeat the walk annually, and he also hopes others will join him.

“It’s just my way of honoring those who died, in Afghanistan, in other places, and those who will make that ultimate sacrifice in the future,” he said.

Asked if he still struggles at times with his military past, Lambert quietly nods.

“I do, especially if I watch say a war movie, or see something on television that brings back memories,” he said. “And today is the hardest of all.”

Lambert said he knows at least one person he served with took their own life as a result of the stress and trauma from serving in active duty, and said while there is no definitive proof, he believes several others likely have because “alcohol was involved, they were driving, and crashed, and I can’t help but believe it was maybe their way of ending it without being direct about it.” The thought that someone would be so committed to serve, then end up being so unable to manage the stress and the adjustment on their return home, makes him sad.

“I would tell them not to give up, that they matter,” he said. “Their life matters, and they can find help, if they just don’t give up.”

Lambert said he is grateful for his own survival, but insists the honor and the remembrance, especially on Memorial Day, belongs to those who did not.

“After this walk, I get to go home and take a cold bath and relax,” he said. “I will always remember those who didn’t get to come home.”