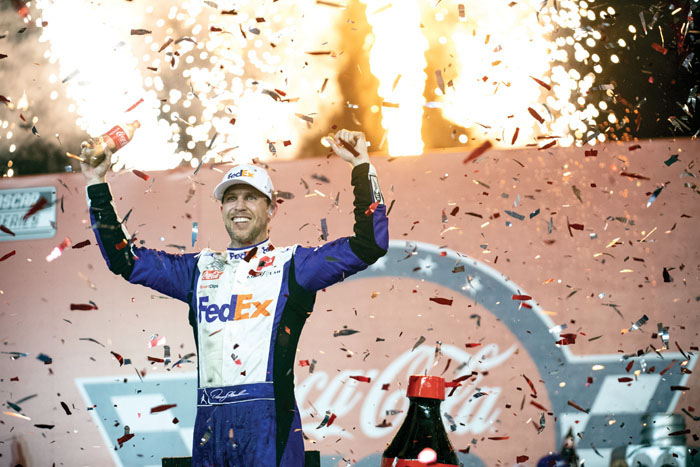 CONCORD — The Coca-Cola 600 was many things — excruciatingly long, wildly unpredictable and perhaps above all else, immensely entertaining.

It was, as William Byron described after getting caught up in a 12-car crash, “chaos out there.”

In race that took five hours, 13 minutes to complete and included 18 cautions and 17 cars finishing in the garage in various states of disrepair, the first Next Gen race at Charlotte Motor Speedway left many shaking their heads over the events of the night. Denny Hamlin ultimately won the longest race in NASCAR history (619.5 miles) by beating Joe Gibbs Racing teammate Kyle Busch to the finish line by 0.014 seconds in double overtime.

Things were so insane at one point that Fox Sports racing analyst and longtime Cup Series driver Clint Bowyer exclaimed, “This is the wildest and craziest 600 that has ever happened!”

And he was right.

Few cars escaped the race unscathed, with Kyle Larson, Kyle Busch and Bubba Wallace among the many who simply got sideways while racing alone and spun out, often times ending up harmlessly in the infield turf and drawing a yellow flag.

Others weren’t as fortunate.

Chris Buescher was involved in a scary wreck that saw his No. 17 Ford flip five times before landing on its hood. Safety crews had to carefully to flip his car over before Buescher could climb out of the vehicle. He walked away sore but relatively unscathed.

“Thank you to everybody working for not slamming it back,” Buescher said. “It was nice to be able to get out. The blood is rushing to your head a little bit.”

And that wasn’t even the craziest wreck of the night.

Last weekend’s All-Star Race winner, Ryan Blaney, got too low on the apron at the bottom of the track on lap 192 and spun to the right, heading up the track where he collected 11 other cars in the melee and ended the night for Brad Keselowski, Wallace, Kurt Busch and Chase Elliott, whose mangled cars were taken behind the pit wall.

The most costly wreck, at least for defending race champion Kyle Larson, came when Chase Briscoe crashed with two laps to go while trying to take the lead from him, setting up overtime and adding to the madness.

Larson, who appeared on the verge of becoming the first driver to repeat as champion of the Coca-Cola 600 since Jimmie Johnson in 2005, then got caught up in a wreck a few minutes later when Austin Dillon raced up from behind and went four wide for the lead. Larson nipped Dillon, causing another multicar collision and extending the race even further.

Hamlin somehow made it through the carnage without a nick and held off Joe Gibbs Racing teammate Kyle Busch on the second restart for the win.

“The (Next Gen) car has less side force and less general downforce,” Hamlin said of all the wrecks. “In our old car you could kind of hang out. The right side was a billboard, it was flat, so it caught air. Any time you stick your hand out of the window, you could feel it. This one is all rounded. The moment it gets sideways, it just spins out. You don’t have as much aerodynamics that keeps the car planted to the track.”

That was a point of frustration for Byron, a Charlotte native.

“It’s chaos out there,” Byron said. “You can’t drive the car the slightest bit sideways or you’re wrecked. So, if somebody gets a little bit sideways, then we all wreck. It either takes out other people or they spin to the infield. Just chaos.”

Cup veteran Kevin Harvick expected as much after seeing the uncertainty the Next Gen car has brought this season.

“I’ve been to this race a lot and I knew that the way the mile-and-a-half races had gone this particular year that it was gonna be a war,” Harvick said. “There weren’t as many tire issues as I thought there were going to be, but it wound up just being spinouts because the cars would just become an incredibly big handful as you’d get toward the end of the run.”

Harvick shook his head, adding “it was definitely interesting, to say the least.”

More interesting than the often mundane 600-mile races here at Charlotte Motor Speedway in the past. In 2016, for instance, Martin Truex Jr. led 392 of 400 laps, repeatedly riding away from the pack in clean air. It was an impressive feat but didn’t push the entertainment meter.

He offered high praise for the Next Gen car, too.

“In the past it seemed like we kind of got single-filed out,” Briscoe said. “It was a lot of fun. I’d do another 600 miles for sure.”

Hamlin acknowledged there is still a lot that teams needs to learn about the Next Gen car but said that will come in time.

“Every time we change cars it takes like a significant amount of time to get it right,” Hamlin said. “This was a major overhaul of a car. Other than it had a steering wheel and four tires, there wasn’t much that was similar to the previous generation car. That car had been honed in for a long time. This one still has some work to do. We got to do some testing to try to fix it in some areas. But in the meantime, we’re still having some pretty good racing.”