Taking another read of banned books 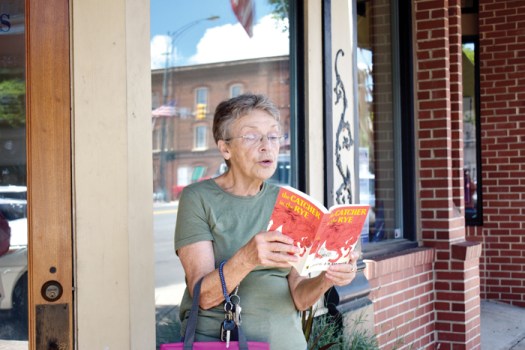 Whitney Peckman reads a selection from ‘The Catcher in the Rye’ outside of South Main Book Company on Saturday. ELISABETH STRILLACCI / SALISBURY POST 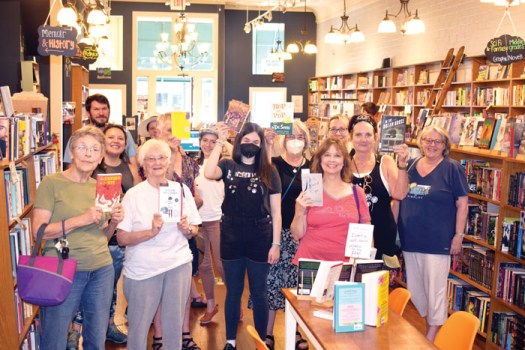 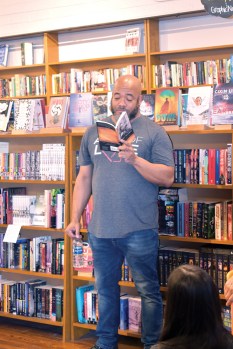 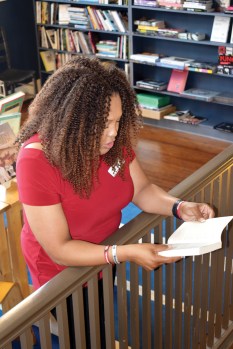 SALISBURY — They might be banned in some places, but on Saturday afternoon, many of the books that are currently banned by schools got another reading, this one out loud.

Alissa Redmond, owner of South Main Book Company since 2020, decided to host a Banned Book Reading as a way of giving the community a voice.

“I connect with a number of other book store owners on social media,” she said, “and in recent months, this whole issue of banning books has come more and more to the forefront. So I tried to think about how I could help my own community, help people as concerned as I am. And I realized I could give them a voice.”

She sent out an invite to the community to bring their favorite banned book to the bookstore and read a few pages. More than 20 people showed up, some to read, some to listen, all to give support.

“‘Banned’ is actually a misnomer,” said Redmond. “A better word is maybe ‘challenged.’ Right now, in Virginia, a number of book store owners are banding together to stand up against a request for a restraining order that would prevent private booksellers from selling the books “Gender Queer” and “A Court of Mist and Fury” to minors. The request is part of a larger lawsuit that would prohibit the selling of the books to minors without parental consent. A retired judge has already found “probable cause” that both books qualify as “obscene.” A retired judge had to rule on the case as all other judges in Virginia Beach have allegedly recused themselves, according to one of the attorneys in the case.

Redmond said she is hopeful this area does not follow suit.

Whitney Peckman decided she would read a selection from “The Catcher in the Rye” outside the store on the sidewalk, so anyone passing by could hear. She kept her voice moderate, without shouting, but noted that the people who had come inside were already people who read, and she hoped to reach others.

“People should understand that the push to getting books banned in school libraries all over the country comes from the ultra-conservatives,” she said. “I have some things I am conservative about, but reading is not one of them. Today’s event is to alert people to this issue, and to encourage them to go to their school board meetings to hear what is being said, and decided.”

“I don’t know who we could trust more as a group than our teachers,” she added. “A well-educated person is well-rounded. You can travel the world from your living room, and can learn about other cultures, other countries, without having to go anywhere. And teachers know this.”

Anthony Smith, a member of the Salisbury city council, read from James Baldwin’s “The Fire Next Time,” noting that Baldwin has been an author at the center of controversy before. But he said the end of the book succinctly sums up how things seem to him at the moment.

“God gave Noah the rainbow as a sign — no more water. Fire next time,” he read.

People read from books including “Anti-Racist Baby,” “The Bluest Eye,” “I Know Why the Caged Bird Sings,” “Harry Potter and the Sorcerer’s Stone,” “Hop on Pop,” and “In the Dream House,” all currently on the banned books list.

Tangela Morgan, a teacher and guidance counselor now running for state office, chose to read from “To Kill a Mockingbird.”

“I so relate to this book,” she said. “And growing up, I did not come from a family of means. The money my family earned went toward providing our basic needs. We didn’t go to museums or take vacations. But as long as I had books, I could travel and I could learn. I could do without actually having to go. I hope children always have books.”

In addition to public awareness, Redmond had a small fundraiser for the Rowan County Literacy Council and at the end of the event, donated $175 to the organization.