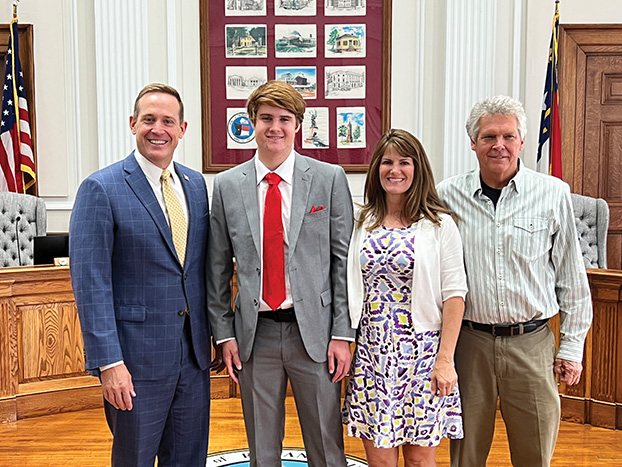 SALISBURY — Jacob Hinson has made the most of the past four years.

And he’s got the medals to prove it.

On Thursday afternoon, Hinson, 18, of China Grove was recognized by Rep. Ted Budd for earning both bronze and silver Congressional Awards. Established by Congress in 1979, a Congressional Award is one of the highest honors for youth civilians.

In the ceremony held at the Rowan County Administration Building, Budd also presented Hinson with a challenge coin featuring North Carolina’s motto: Esse quam videri. “It means to be rather than to seem,” Budd said. “Thank you for being one who is rather than one who just seems and for giving us hope for the next generation.”

To earn a congressional award, an individual must complete goals in four areas: voluntary public service, personal development, physical fitness and expedition/exploration. A silver medal requires a certain amount of time invested in each area: 200 hours of voluntary service, 100 hours of personal development, 100 hours of physical fitness and a 3 day, 2 night trip for an expedition. A young person can register when they’re 13 ½ years old and must complete activities before their 24th birthday. 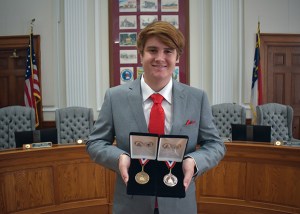 Hinson said he’s happy to have met his goals and is proud of the good he’s been able to do. Hinson was inspired to participate in the program by friends who earned the medal. His mother, Lisa, also encouraged him to take on the challenge.

“I encouraged him to do it to improve who he is, to become a better person, to have more character and to give back to those who are less fortunate, those type of things,” she said.

Hinson’s personal development was hard earned. At 16, he started working for a landscaping company. The job required long days that started around 5:50 a.m. and ended around 8 or 9 p.m.

Hinson checked the physical fitness box by logging exhausting hours in the water. Over the course of a year, Hinson worked with his swim coach to master the butterfly — considered to be one of the most difficult swimming strokes to conquer. Hinson managed to cut 11 seconds off of his butterfly time.

For his expedition, Hinson took a bike trip on the Virginia Creeper Trail with his mother, sister and grandmother. They also visited Linville Falls and Linville Gorge.

Reaching 200 volunteer hours was perhaps the most difficult part of the process since much of Hinson’s time was spent in school, in the pool or at work. But each summer, Hinson would take a full week off work to log volunteer hours at Wings of Eagles Ranch, a camp in Concord where people with special needs enjoy fun activities. Hinson’s primary responsibility at the camp was to help stabilize participants while they rode horses. He also volunteered with Samaritan’s Purse and Special Olympics.

With the bronze and silver medals in his possession, Hinson said he’s thinking about going after the gold. That would require 200 more hours of volunteer service. He’s got four years to do it, but college and other responsibilities could make it tough.

Having recently graduated from high school, Hinson plans on attending William Peace University in Raleigh. He expects to major in simulation and game design and hopes to one day have a hand in designing the video games he loves to play.

More information about the Congressional Award is available online at congressionalaward.org.