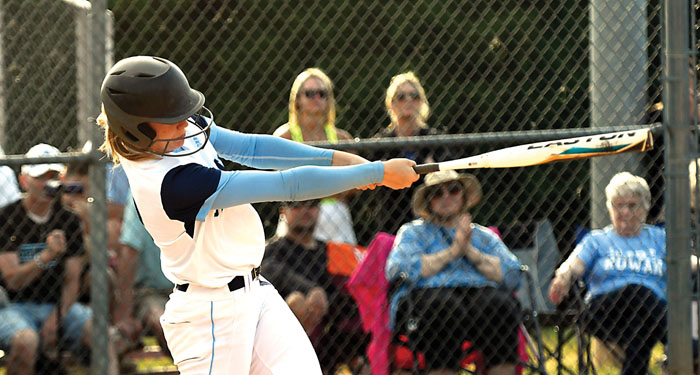 West's Emma Clarke is the softball player of the year. File photo by Wayne Hinshaw, for the Salisbury Post

West Rowan head coach Jimmy Greene insists that we just witnessed it — at least for a non-pitcher.

It’s hard to argue with numbers. West’s 6-foot shortstop Emma Clarke put up crazy ones and is the Post’s Rowan County Player of the Year.

The sophomore actually launched 15 homers this season, but the Falcons never got to complete a game at West Stanly that was suspended moments after Clarke’s second homer of the day tied the score in the fifth inning.

Clarke stole 15 bases, had 42 hits, scored 39 runs, drove in an astounding 54 runs. West’s record officially was 20-6, but one of those wins was by forfeit, so the Falcons took the field 25 times. Clarke averaged 2.16 RBIs per contest.

“She’s an elite player and has to be the state’s best player who isn’t a pitcher,” Greene said. “When Emma just relaxes and plays and gets it flowing, she’s an incredible sight.  She’s not only as good a hitter as I’ve ever seen, she can field and she can fly on the bases. I’ve had girls who played for West come out to watch her for the first time and it’s like, ‘Oh my God! I knew she was good, but I had no idea she was that good.'”

Maybe all you need to know is that on the night West Rowan’s season ended in the second round of the 3A state playoffs at Central Cabarrus, Clarke never got to take a swing. She walked every time she went to the plate. Clarke had come close to beating Central Cabarrus in the previous meeting by smashing a pair of two-run homers. The Vikings had seen enough.

“One of my goals was to get more hits than walks,” Clarke said. “Fortunately, I had great player hitting behind me. Teams usually pitched to me because (Appalachian State commit) Brooke Kennerly was coming up next. Most teams didn’t want to put a runner on base for her.”

Clarke made a transition this year to playing shortstop. Defense was her biggest concern.

“Shortstop is a very big role, and we had a great one last year in Allison Ennis,” Clarke said. “Those were big shoes to fill. I put in a lot of work there to be as good as I could be.”

Her glove was fine, but it was her bat that roared. In the county games, West’s contests against East, South and Carson, all of whom had teams good enough to make the playoffs, Clarke was supernatural. She went 16-for-24 in those seven games with five homers and 21 RBIs. She got it done even against the teams that knew better than anyone how to pitch to her.

But maybe there is no good way to pitch to her. She hits homers on low pitches or high ones. She can pull an inside pitch 100 feet over the fence or send an outside pitch into orbit over  the right-field wall.

“I hit a homer against Carson that was probably my favorite moment of the season, but the most important thing was we won all of those county games,” Clarke said.

Clarke also excels for the Falcons in volleyball and basketball, so her time as the county’s most celebrated year-round female athlete is just around the corner.

“To the 8-year-olds in our part of the county, she’s already a rock star,” Greene said. “She’s got a cheering section. They look up to her, and she understands what that means. She’s a great role model.”

Clarke is the daughter of former West head softball coach Elizabeth Greene Clarke. Her husband is Ken Clarke, a notable local golfer and former basketball star. Emma has the advantage of great genetics, but she has added sensational work ethic to maximize her talent.

“She’s been training with K.P. Parks for strength and agility for a long while now,” Greene said. “She’s always hitting, always lifting, always working to get better every day at something.”

Greene tried to make his niece a pitcher when she was about 10. That didn’t take — she hated it — but she loves everything else about the game.

Clarke has a huge summer ahead of her. She’ll be playing with other elite players on a travel team that will venture as far away as California and Colorado for tournaments.

Clarke is on the radar for big-time college programs, even though they can’t directly contact her yet. She’s gone to camps and wowed coaches at schools such as Georgia, Tennessee and Florida State.

On Sept. 1 of her junior year, college coaches will be able to personally contact Clarke and make their recruiting pitches.

That’s when her life is going to get really busy. She could be the Jalon Walker of Rowan County softball. There’s not much doubt she’s going to be the most heavily recruited Rowan softball player ever.

Greene said next season Clarke will be the lead-off batter for West, so opposing coaches can start worrying about that now.

“Emma swung at some high pitches when we lost to Central Cabarrus early in the year, and I yelled at her so hard that my hat fell off,” Greene said. “But that was the only bad game she had out of 25. That’s a girl who was born to play on the dirt.”

Coach of the Year — Jimmy Greene, West— Falcons were 20-6 overall and 7-0 in county games

Lonna Addison, Carson, Jr. — Produced five homers and 27 RBIs, while handling most of the pitching for the Cougars

Arabelle Shulenberger, West. Fr. — Was at her best in the circle in the big games, batted .351

Lexie Ritchie, South, Fr. — A program difference-maker, she itched a perfect game for the Raiders, contributed 12 RBIs at the plate

Kali Nelson, South, Sr. — Missed some games, but batted .357 and made diving catches

Bailey Yon, South, Jr. — Had 20 hits and did a great job behind the plate