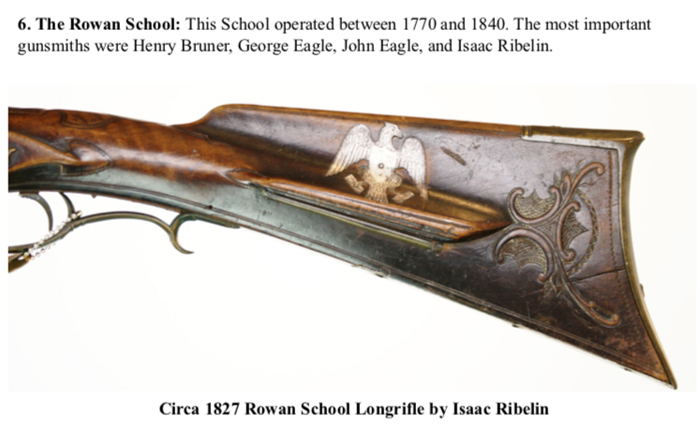 One of the rifles from the Rowan school — submitted photo

Historian and author C. Michael Briggs will give a program at the Forsyth County Public Library auditorium on Saturday, June 4, at 2 p.m. on the 18th and 19th the Century Longrifle Schools in Forsyth and Davidson counties.

Briggs is the author of seven books, including “The Longrifle Makers of the Rowan School,”  and will present the program at the library located at 660 W. Fifth St. in Winston-Salem. Admission is free.

The program will feature a display of ornate historic longrifles made in the Salem School and the Davidson School. Briggs will explain who the gunsmiths were that worked in these schools and how their culture and religion affected the icons and symbols they put on their longrifles. The Salem School and the Davidson School were two of the nine regional styles of longrifles made in the Piedmont and mountains of North Carolina between 1760 and 1860.

Briggs says, “They were a melting pot of different religions and cultures which greatly influenced the material items they created here. This is best illustrated in their longrifles and the icons and symbols they put on them. This is not a subject that is well known to the public but can be of interest to those who take the time to look.”

The Davidson School of Longrifle Makers copied the stock architecture and Eagle patchbox design used by the Salem School but added their own unique icons and symbols on their longrifles. The Davidson gunsmiths were of German descent but were not Moravians. They were a mix of Lutheran, Primitive Baptist and Methodist.