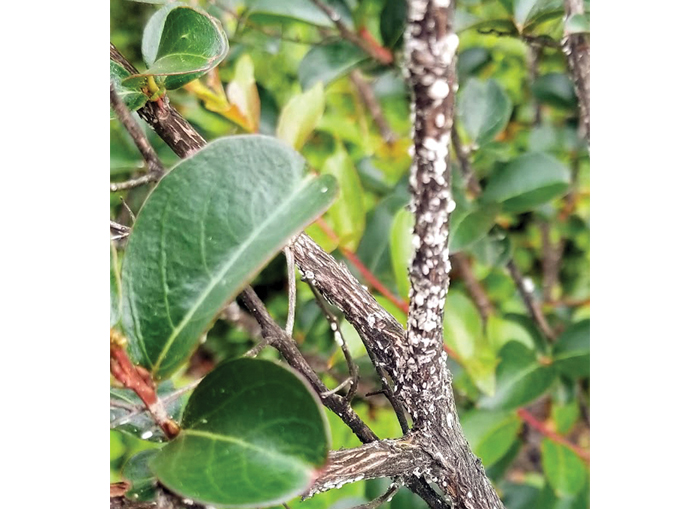 Walking on the St. John’s Lutheran Church campus a few weeks ago, I noticed a recently planted crape myrtle that didn’t appear to have its normal spring color or vigor. Upon closer inspection, I noticed the bark and newly forming leaves were covered with a white scale insect.

The small tree was infested with crape myrtle bark scale (Acanthococcus lagerstroemiae). The pest was introduced from Asia in Texas almost 20 years ago and now has spread through many of the southern states including the Piedmont in North Carolina. These insect infestations are fluffy white or grayish and tend to congregate profusely on stems, twigs and branches.

Bark scales produce a large amount of honeydew as they feed. As a result, the honeydew on the limbs and twigs turns dark black with a sooty appearance covering the entire tree. These insects will weaken the trees, but will not kill them outright. The appearance of the tree itself is rather unsightly. Crape myrtles planted in sunny locations and kept healthy tend to have fewer scale and other insect problems.

There are a couple of of methods to chemically control the insects. Horticultural oils work well early in the spring when temperatures are between 40 and 90 degrees. There are systemic insecticides on the market that are applied as a drench around the plant. The insecticide is absorbed into the plant and controls the scale and other insects. These types of insecticides should be applied now when these plants are actively growing but not in bloom to avoid harming pollinators. Follow all label directions before applying any pesticide.  For detailed information, go to https://hgic.clemson.edu/factsheet/crapemyrtle-bark-scale/