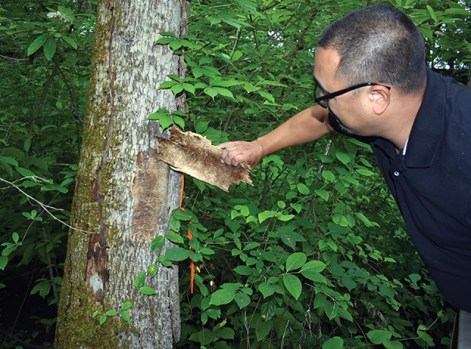 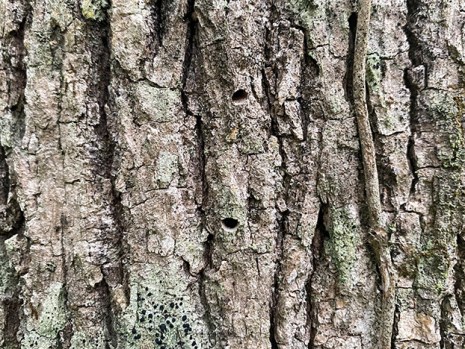 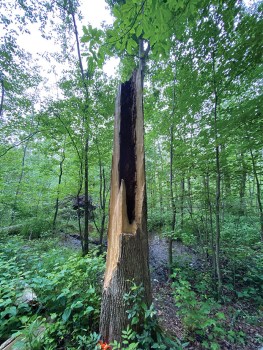 The remains of an ash tree that snapped over in the westlands at Horizons Unlimited. Ben Stansell/Salisbury Post

SALISBURY — Pulling back the flaking bark of the green ash tree with the ease of someone peeling an orange, Jay Bolin exposes the evidence he expected to find.

“Look at those D-shaped exit holes,” he says. “This thing is as dead as a doornail.”

The cause of death is clear. So is the culprit.

Like many of the green ash trees in both Catawba College’s 189-acre Fred Stanback Jr. Ecological Preserve and the connected wetlands of Horizons Unlimited, the tree has fallen victim to the emerald ash borer. For the past three years, the Catawba professor and several of his students have been documenting the decimation caused by the invasive insect.

Under the guidance of Bolin and Professor Andrew Jacobson, students Arilyn Lynch and Kate Halstead recently gave a presentation on their findings at the Association of Southeastern Biologists meeting in Arkansas. Lynch, who graduated earlier this month, was awarded first place for excellence in student research. She will present the group’s findings at the Beta Beta Beta Biological Honor Society meeting in June.

Native to Asia, the green, metallic emerald ash borer was likely transported to the United States in wood packing materials. Since it was first discovered in Michigan in 2002, the beetle has spread to more than 30 states, leaving millions of dead ash trees in its wake.

The beetle lays its eggs in the ash tree’s bark. When the eggs hatch, larvae bore into the bark and feed on the transportation tissue of the tree. The serpentine “galleries” caused by the larvae disrupt the movement of nutrients and water within the tree, ultimately causing the tree’s demise. The beetles leave “D-shaped” exit holes in the side of trees, a mark for death. Infected ash trees also show suckering, where they try to sprout new branches near the base of their trunk.

It took the beetle about two decades to reach North Carolina. When Bolin noticed indications of the beetle’s presence in 2019, he and several students tagged and numbered ash trees within six plots in the swampy ecological preserve, which serves as a habitat for many species of plants and animals.

Within one year of studying the trees, Bolin and the students saw enough evidence to make a grave prediction: most of the green ash trees in the preserve would be dead within five years. The data they’ve collected since has reinforced that initial prognostication.

“We expect all of them to die within two years,” Bolin said.

Dead green ash trees are still standing throughout the preserve, limbless and leafless. The once lush canopy created by the trees in parts of the marshy forest has disappeared. The canopy cover was reduced from 73% in 2020 to 18.5% in 2021, according to the Catawba students’ research. And with ash making up 67.8% of the total canopy trees, that means significantly more light is reaching the ground.

“Basically this was a dark swamp forest with no light and now it’s this insane meadow,” Bolin said.

Other species of plants, animals and trees are taking advantage of their moment in the sun. Red maples, known as “super generalists” for their ability to thrive in a variety of environments, are poised to take over as the forest’s dominant tree species.

“It’s a big shift in the ecology of the forest,” Bolin said.

One animal benefiting from the green ash’s demise is the woodpecker.

“They’re going nuts,” Bolin said. “They’re so happy. Imagine, this is all food.”

While a changing forest isn’t a bad thing, Bolin said, the dead ash trees do create a hazard due to their propensity for crashing to the ground. Living next to the preserve, Bolin hears trees falling down “all the time.” Bolin even has a large green ash tree looming over his own home. To prevent it from falling and causing major damage, he’s treating it with an insecticide.

With so many dead ash trees in the preserve, Bolin said the college may need to limit access to the forest on exceptionally windy days.

“They’re all going to fall pretty quick, right?” Bolin said. “If we get one hurricane, it’s going to be crazy, like matchsticks.”

Falling green ash trees aren’t just a hazard in the ecological preserve. They’re also causing problems for Horizons Unlimited. A science center for Rowan-Salisbury Schools, Horizons Unlimited has 32 acres of wetlands and trails adjacent to the preserve. Boardwalks and observation platforms in the wetlands used by students to engage with wildlife have been consistently damaged by falling trees.

“We’ve just seen over the last couple of years, it’s been one tree after another,” said Elise Tellez, director of Horizons Unlimited. “We’ve made some small repairs, but now it’s like throwing money at problems and having to throw more at it. So, now we’re kind of in waiting mode.”

And there are more dead, standing green ash trees poised to fall. As a result, the boardwalk portion of the trail is currently closed to students.

Bolin hopes to continue the study for a few more years, until the green ash tree canopy has been completely eliminated. He’s thankful to both Lynch and Halstead for their research help, as well as former Catawba students Madison Kluge and Matt Rodriguez, who previously helped with the study.