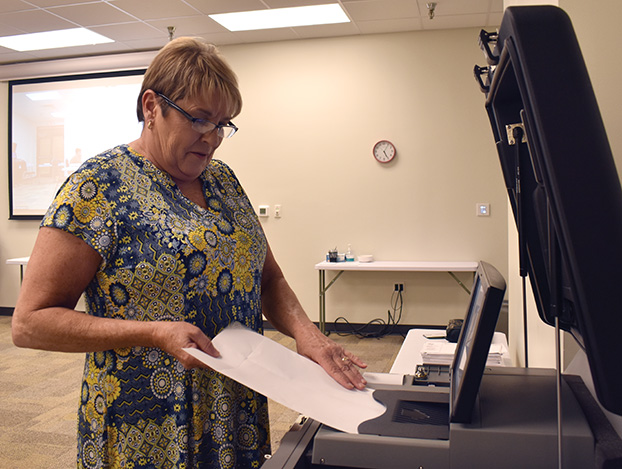 Senior Elections Clerk Susan Price feeds a ballot into a scanner and tabulator. The Board of Elections on Thursday evening met to count and approve supplemental absentee and provisional ballots cast in the primary. Ben Stansell/Salisbury Post

SALISBURY — With all ballots calculated, the outcomes of the May 17 primary remain the same.

After those votes were added to the election night totals, there were no changes in the outcome of any races. There will be no recounts and no second primaries. The primary winners will advance to the general election in November, pending a final sign off from the State Board of Elections.

The only race with any lingering uncertainty coming into Thursday night was for the third Rowan County Board of Commissioners seat on the Republican side. On election night, challenger Angie Spillman earned 6,671 votes, only 200 less than incumbent Judy Klusman. To have the ability to request a recount, Spillman needed to be within 1% of her and Klusman’s total votes, meaning she would have needed to be within 135 votes of Klusman.

After the additional ballots were incorporated Thursday, Spillman did not make up any ground. She finished with 6,691 votes compared to Klusman’s final tally of 6,892.

Klusman will move onto the general election alongside incumbent running mates Jim Greene and Greg Edds. The trio will seek to retain their seats against Democrats Alisha Byrd-Clark and Sam Post. Byrd-Clark, a member of the Rowan-Salisbury Board of Education, is running with serious intentions to win. Post, meanwhile, said he’s not aiming to win but only hopes to shed light on important issues.

In the other close Republican race, challenger Chris Sease remained more than 1% ahead of incumbent Judge Kevin Eddinger for District Court Judge seat No. 1, although the difference between the two did narrow slightly from 204 votes to 195 votes after supplemental absentee and provisional ballots were counted.

In total, there were 19,667 ballots cast in the primary. The 15,828 Republican ballots cast dwarfed the 3,838 Democratic ballots cast,  not surprising given the number of Republicans in competitive primary races.

“We’re happy to be complete and that everything went well,” McCubbins said.