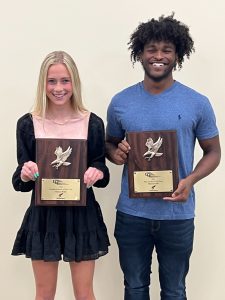 Webb starred for the Hornets in cross country, indoor track and outdoor track in addition to scoring 55 goals for the soccer team.

Cook broke school records as a football receiver and was indoor track state champ in the triple jump. He was outdoor state runner-up in the triple jump and sprinted on a relay team that placed in the 2A State Championships. He also contributed to the baseball team.