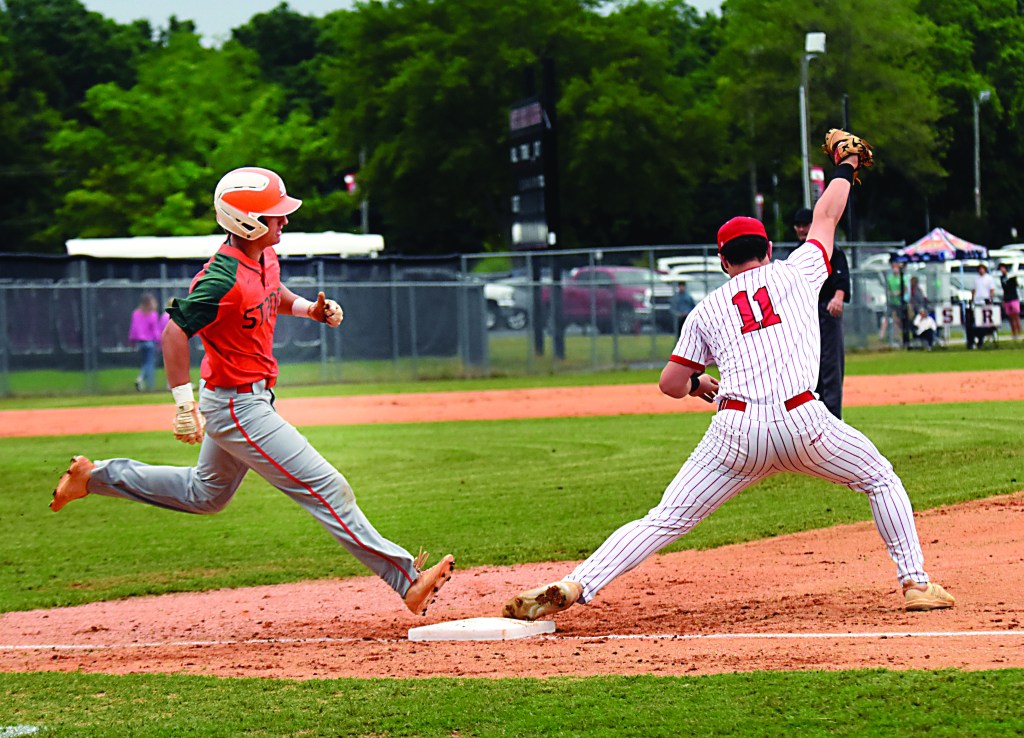 East Lincoln's Trey Spees is out at first base as South's, JD James takes the throw.in the first game of the series. Photo by Wayne Hinshaw, for the Salisbury Post

Ten-run-ruled and thoroughly trounced by the top-seeded Raiders in Game 1 of the West Regional Championship Series at the South diamond, East Lincoln stormed back. The 11th-seeded Mustangs (21-7) got productive at-bats from a number of players in a three-run sixth that proved decisive.

A third game now will be necessary to decide the series. It will be played at South at 7 p.m. on Saturday. The winner will move on to the 3A State Championship Series and will take on South Brunswick.

South (27-5) couldn’t have asked for a better start to the game. Nathan Chrismon singled with one out, stole second and third and scored on Ty Hubbard’s hit. Haiden Leffew’s double put runners at second and third. South pitcher Carson Crainshaw got another run home with a groundout, and the Raiders led 2-0.

Graham Smiley launched his second homer of the series to lead off the bottom of the second, and it was 2-1.

The Raiders made it 3-1 in the fourth on singles by Leffew, JD James and Cole Thomas.

South made it 4-1 in top of the fifth when Kane Kepley scored on Leffew’s double.

South was rolling behind Crainshaw at that point, but the turning point came in the bottom of the fifth. With two men out, Garrett Michel drove a 1-and-0 pitch over the right-field fence for the two-run homer that sliced South’s lead to 4-3. It was the 17th homer of the season for Michael, a senior headed to Virginia Tech.

Dahle got the Raiders out in the top of the sixth,

In the bottom of the inning, singles by Evan Matile and Smiley got East Lincoln started. With one out, Nate Bouchard, who had rapped into a double play to end the fourth, bounced one through the right side, and East Lincoln waved Matile home from second. Finch McMillin charged the ball in right field and threw home, but the run scored and East Lincoln had runners at second and third when the dust settled. No. 7 hitter Landon Burns’ flyball was deep enough to put the home team ahead. No. 8 man Michael Phuntek’s single provided an insurance run.

Dahle quickly handled the Raiders in the seventh, and it was over.

South had 10 hits, including three by Leffew and two by Kepley.  Dahle struck out four and walked two, while throwing 95 pitches. He was good after that rocky first inning.

Crainshaw lost for the first time this season. He went the distance, allowed eight hits, struck out three and walked two.

Chandler Oddie will pitch for South on Saturday.

East Lincoln could come back with No. 1 pitcher Isaac Armstrong, who was pulled after 50 pitches on Wednesday, with East Lincoln facing a big deficit. Outfielder Seth Haigler has pitched quite a bit for the Mustangs and looks like their No. 3 man on the mound.