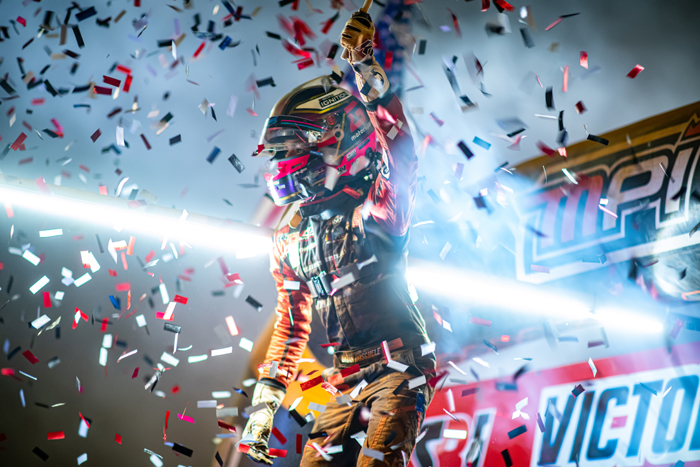 Photo by Jacy Norgaard — Gavan Boschele claimed victory at Millbridge Speedway in the first race of the series on Tuesday night.

It was Boschele’s second National Midget win (POWRi 2021). After starting from the pole position, Boschele backed into second and held the runner-up spot for 21 laps while his KKM teammate, Bryant Wiedeman of Colby, Kansas, controlled the race.

Boschele cruised to a 0.938-second margin of victory in the  $4,000-to-win event after he hooked Wiedeman’s rear bumper and sent the Yerf Dog No. 01 spinning in front of the field. Wiedeman and 10 or more other competitors had nowhere to go.

“I hate that I got into Bryant there,” Boschele said. “I knew what he was doing the whole race and we had no problems before, but then I think he caught a rut and that split-second got me to his back bumper before I could react and got him. It’s a racing deal, but it still sucks. It’s pretty awesome to win this first-ever race, though, and especially to do it at my home track.”

Finishing in the runner-up spot with a 12th-to-second charge was Zach Daum of Pocahontas, Illinoss.  Closing out the podium was another Mooresville native, Nick Drake, who brought the No. 55 car in third place.

Earlier in the night,  Taylor Reimer earned the first Whitz Racing QuickTime Award as she circled Millbridge in 10.026 seconds aboard the Keith Kunz/Curb-Agajanian Motorsports, BuzzBallz No. 25K, claiming a quick $600 for her efforts.

Upcoming events include next Wednesday’s Xtreme Outlaw Midget Series presented by Toyota conclusion with the Production Alliance Group Double Down Showdown and a $5,000-to-win program.