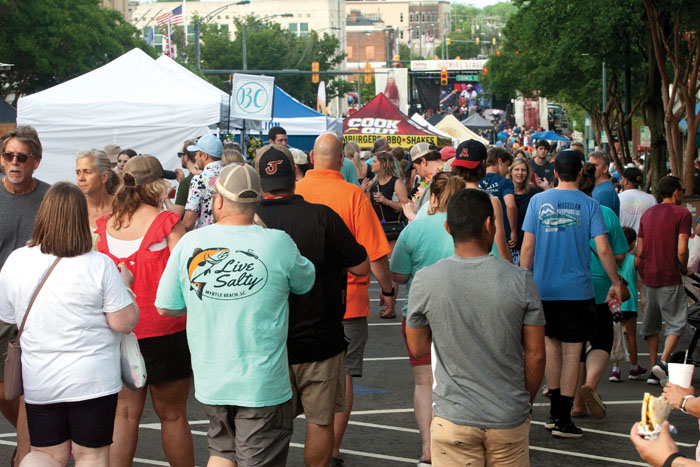 SALISBURY — The Cheerwine Festival had massive success this past weekend with one of the biggest crowds to date.

According to Nick Aceves, Salisbury’s Parks and Recreation director, the festival welcomed an estimated 60,000 crowd to the celebratory event of Salisbury’s original soft drink. This is the same estimated outcome of 2019’s festival.

The total is calculated using Jacobs rule of thumb, a crowd estimation strategy used by event coordinators to keep track of the number of visitors in a single gathering.

In 1967, Herbert Jacobs determined that the number of people in a gathering can be determined by multiplying area by density. In the Cheerwine Festival’s case, a dense crowd gives one individual an area of two and a half square feet. The city of Salisbury used this method with an area containing 100 estimated individuals to determine the total event attendance of the entire festival space.

The astounding variety of Cheerwine-themed foods seemed to bring the most favor of all the annual attendees. This year’s festival welcomed returning vendors and new ones for purchasing pleasures including baked goods, barbecue and drinks.

The following vendors released their approximate numbers of sales from Saturday:

“We’re truly grateful for all the customers who supported the business,” Wowza BBQ co-owner Starla Daniel said. “We’re looking forward to coming back next year.”

Businesses felt called to honor the soft drink through their products.

“We’ve been pushing hard to represent Cheerwine the best we can since it does come from Salisbury,” said brewmaster and co-owner of New Sarum, Andy Maben. “I feel we did that. We were also set up for success since we had our physical brewery open along with our two tents.”

The vendors also gave praise to the festival staff who took care of their needs and helped with preparing them for the crowds.

“We were tickled, this was our first year,” said Suzy Bennett, co-owner of Little Widdler. “It was a great festival, the staff were helpful and notified us of the oncoming storm so we were able to batten down the hatches and plan accordingly to protect the merchandise.”

Eric Balseca, co-owner of Que Viva Latin Street Grill, also recognized the event organizers and staff, saying that they made sure the vendors were comfortable and taken care of through out the day.

Despite a passing afternoon storm, the event hit a record breaking economic impact of $1.85 million, a 20.9% increase from 2019’s numbers at $1.53 million. The total included sale profits from vendors, direct funding toward the festival and paid lodging through a submitted grant to the city for the music performers. Promoting the Cheerwine Festival goes through multifaceted marketing, using social media and digital advertising to play off of its own popularity and assets.

According to Rowan County Tourism Director James Meacham, this year’s Cheerwine Festival was an economic success, with 60% of the crowd Saturday including locals from inside the county while the other 35-40% of attendees came from out of town.

Overall tourism for the county has hit record levels as of May 2022, ahead of its status in 2019. Business travel has been the only low level as companies continue to use remote solutions for their practices, according to Meacham.

Despite an increase of gas prices, Meacham said there’s been no pull backs as of May 14 but the Tourism Development Authority is keeping a close eye on the effect it has on travels.

“Dining numbers may lessen with families choosing to stay home for meals,” said Meacham. “But as far as tourism, we’re staying cautiously optimistic since fall events bring in a lot of tourists to Rowan County.”

Nightly hotel rates rose from $119 to $120.44 Saturday. Meacham said 90% of commercial hotel rooms were occupied on the day of Cheerwine Festival, translating to 712 hotel rooms out of 793 in the County. Compared to 2019’s festival, the occupancy rate increased by 16.5%.