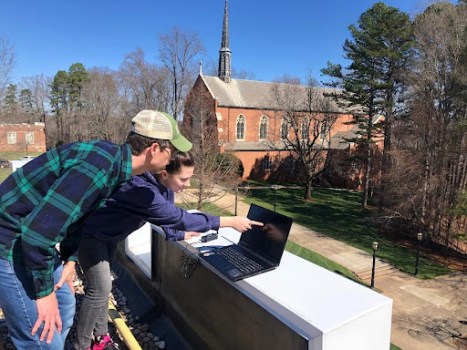 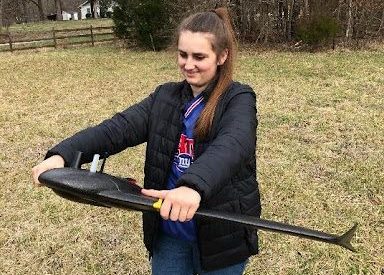 Submitted photo - Carolyn Kasper preparing to launch the SenseFly eBee fixed-wing drone at a property owned by the Conservation Fund.

SALISBURY — Despite headwinds from the global COVID-19 pandemic, Catawba College’s drone program began in 2020. Now, two years later, the program has taken off. Three Catawba students are pushing the boundaries of what can be done with small unmanned aerial vehicles.

Carolyn Kasper, a graduating senior who is also interning with Rowan County’s Geographic Information Systems division, is the first student in the program to obtain a UAV pilot license from the Federal Aviation Administration.

Kasper has been working with the Conservation Fund, a national nonprofit organization that assists in land conservation efforts. The Conservation Fund can work like a land trust, similar to the Three Rivers Land Trust in downtown Salisbury, using conservation easements to protect land with willing landowners. However, the fund always turns the land over to other entities, often government partners, to maintain the land in the long-term.

In the short-term, the fund monitors the property while owning it, usually on foot. The big question is, can drones monitor the easement faster and more efficiently than other traditional methods?

“For some properties, given the right size and environmental conditions on the site, monitoring by drone is easy, accurate and probably saves time. But, this certainly isn’t true for all sites,” Kasper said.

Over this past academic year, Halstead has worked on a project that focuses on the potential of using UAVs to monitor tree health in Catawba College’s Fred Stanback Jr. Ecological Preserve. “Ash trees (genus Fraxinus) across the region and country are dying from the invasive emerald ash borer,” said Halstead. “The extent of their impact is obvious when crossing the I-85 Yadkin River bridge. On either side of the river, you see dozens if not hundreds of dead ash trees.”

Halstead uses a fixed wing drone to fly in a lawn-mower pattern over Catawba’s preserve, taking pictures every few seconds. The goal is to stitch the images together to create an ultra-high-resolution orthomosaic (a large cohesive image) of the preserve. Upon scanning the image, Halstead can then count standing dead trees, called snags. It is important for a land manager to be able to tell how many trees, quickly and accurately, are alive or dead. This drone-based method to count standing dead trees may be able to offer a cost- and time-saving reduction as compared to the usual land-based survey. Her work was recently presented at the Association for Southeastern Biologists annual conference in Little Rock, Arkansas.

Jose Martinez is a graduating senior studying information systems with a minor in business administration. He sees a lot of overlap between information systems, business and drones. “Last semester I participated in the Drone Shark Tank competition at Catawba, modeled after the hit entrepreneurial TV show Shark Tank,” said Martinez. “It was really fun and I was floored at all the potential and creative business uses with drones that students came up with.”

The largest GIS software company in the world, ESRI, is investing heavily in 3D and the creation of digital twins for industrial and commercial purposes, he said. In addition, Unity, one of the largest game engine developers in the world, is folding capturing reality into its platform with a goal of encouraging drone-based photography to re-create real, physical spaces in the digital environment for the purposes of gaming, training simulations and more.

Martinez agrees, “Drones are very versatile. We can theoretically make a 3D model of any structure and view it in virtual reality or augmented reality. Imagine playing ‘Grand Theft Auto,’ ‘Zelda’ or other video game, and instead of playing it in some virtual universe, you could play right here on Salisbury’s streets.”