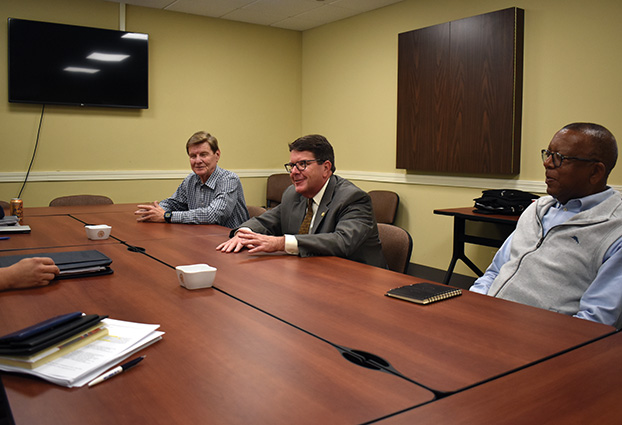 SALISBURY — James “Jim” Greene Jr. is well-acquainted with the pressures that come with municipal growth.

During a 15-year tenure with Concord that started in 1999, Greene supervised numerous city departments first as assistant manager for operations and then as deputy city manager. Serving as Raleigh’s assistant city manager for the past eight years, he guided the planning and development departments of one of the state’s fastest growing municipalities.

At both stops, Greene helped cities adjust to increasing populations.

Greene, a native of Lenoir, plans to put those experiences to work as he settles into his new position as chief administrative officer of Salisbury, a city he believes is poised for progress.

“(Growth) is coming,” Greene said. “So, we have to start focusing on our growth and developing that vision. What do we want this growth to look like and how are we going to be prepared?”

Selected for the position in April, Greene’s first day on the job was Monday. He assumes the role from Brian Hiatt, a former Concord city manager who had been serving in an interim capacity since Lane Bailey retired at the end of 2021. Hiatt will continue to work with the city in an advisory role until the end of June to see through the fiscal year 2022-23 budget he helped assemble.

The recommended budget was presented to council on Tuesday night. A public hearing on the proposed budget will be held at 6 p.m. on June 7 at council chambers, located in City Hall at 217 S. Main St.

As city manager, Greene will lead more than 400 full- and part-time employees, direct development and prepare and present the city’s annual budget. Greene said one of his top priorities is to carry out council’s vision for balanced growth that maintains Salisbury’s “special character” while also ensuring progress doesn’t leave parts of the community behind.

“The other thing I heard loud and clear from council was wanting to make sure that as we grow that this is a Salisbury for all,” he said. “That there are opportunities for all to pursue here in Salisbury and that, as a community and a local government, that we welcome everyone and help everyone pursue these opportunities.”

An equitable approach to economic development, Greene said, will be critical to achieving that goal.

The city, Greene said, also needs to plan for transportation infrastructure that works for everyone.

“Certainly transportation and traffic are always concerns about growth,” he said. “We need growth that is focused on walkability and neighborhoods.”

Greene said he wants to develop a strategic five-year plan to work in concert with the city’s Forward 2040 framework, a comprehensive plan for the next 20 years that is being developed.

Increased development will no doubt have an effect on city utilities such as water and sewer, Greene said. As of May 12, the city has issued 648 water/sewer tap permits, which puts it on pace to exceed the 687 permits issued in fiscal year 2020-21.

“We’ve got an excellent utilities department, but with the growth that we’re seeing, we need to look at our plans and make sure our infrastructure is able to support the growth that is coming,” Greene said. “Especially on the wastewater site, and this was talked about at the council retreat, is looking at opportunities to expand our treatment capacity so that we will be in a good position to handle this growth.”

“The downtown is like the core of the apple and if the core is rotten, the whole apple is rotten,” Greene said. “It impacts the whole community.”

With residential and commercial expansion comes an increased demand for public services like fire and police protection. Keeping those departments and others staffed is one of the most pressing issues facing Salisbury, Greene said.

In the coming weeks, the city expects to receive the results of a compensation and benefits study being conducted by Cary-based Management and Personnel Services Group. In the budget recommended to council Tuesday night, Hiatt called for establishing a $1.1 million compensation “bucket” within the Human Resources department to implement changes based on the study’s results.

Beyond competitive compensation and benefits, Greene said he wants to make sure employees feel valued and have pathways toward career advancement within Salisbury.

“Bottom line: we want Salisbury to be the employer of choice,” Greene said. “We want the talented folks in this region to see that there are a lot of exciting opportunities here at the city of Salisbury and encourage them to join.”

The city’s staff is one reason why Greene was willing to leave Raleigh.

“We have a great team here and that was one of the things that really attracted me to this position,” Greene said. “The employees here are known the be creative, dedicated and hardworking and I wanted to be a part of this team.”

Greene plans on meeting with plenty of city employees over the coming days. He plans to connect with community members as well.

“I’m trying to be a sponge over the next couple of weeks.”