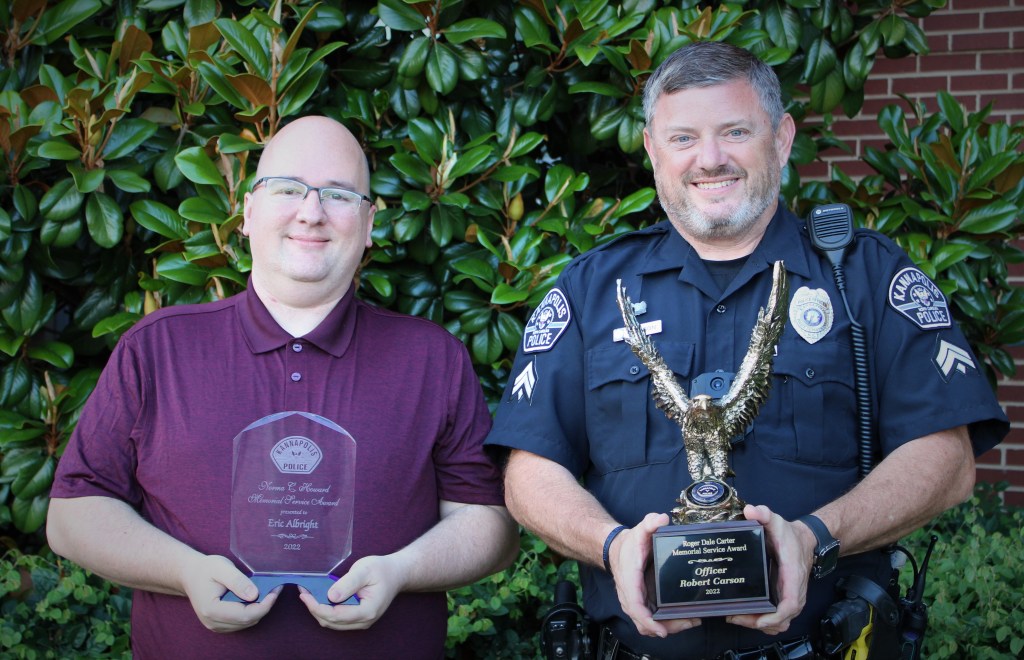 KANNAPOLIS — The Kannapolis Police Department has recognized two members of their organization with annual awards for their service and contributions to the force.

Officer Robert Carson and Telecommunicator Eric Albright were given these honors based on the selections of their peers, demonstrating the appreciation that the members of the department have for the work they do.

Carson was awarded the Roger Dale Carter Memorial Service Award, an honor given out for work officers do with the community. The award was named after Officer Carter who died in the line of duty in 1993.

In addition to serving as a patrol officer, Carson, who has been with Kannapolis since 2013, has worked as a School Resource and DARE Officer for six local elementary schools while also serving as a Crisis Negotiator for the department’s Special Response Team. He was additionally recognized for his contributions towards Toys for Tots in the community.

Albright has worked for the department since 2o17 and this year was honored with the Norma C. Howard Memorial Service award. This honor is presented annually to a civilian police department employee who conducts both their personal and professional lives in a manner that is consistent with the department’s values and code of ethics.

In addition to this, Albright is a member of the Unmanned Aerial (Drone) Systems Unit and the Search and Rescue Team. He is also part of the Rowan County Rescue Squad.

“Eric was chosen by his peers for this honor. He is recognized by his coworkers as having a strong work ethic, being a person of integrity and being dedicated to our department. He is a valued member of our Kannapolis Police Department,” said Captain Chris Hill.