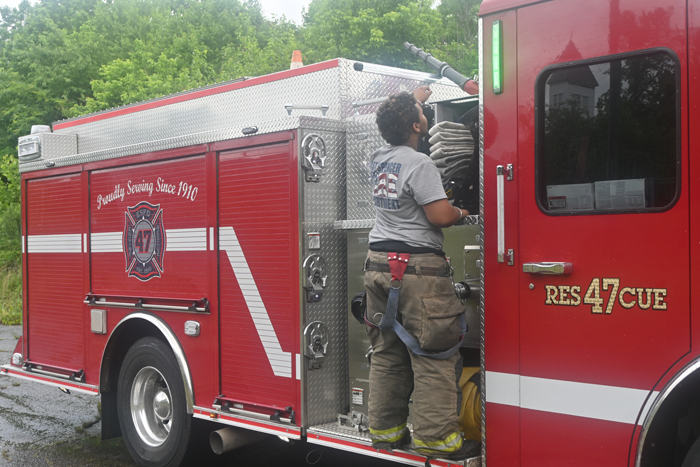 Firefighter Kolby Smith works on a pump training exercise on East Spencer's newest fire truck. The Board of Aldermen Monday night approved paying off the outstanding balance of $200,000 in a lump sum. Elisabeth Strillacci/Salisbury Post

EAST SPENCER – Much to the surprise and delight of Fire Chief Shawn McBride, the Board of Aldermen agreed Monday night to pay off a $200,000 balance on the town’s newest fire truck.

Purchased in 2018, the truck cost $450,000. There are no early payment penalties, according to Town Administrator Michael Douglas, and paying the outstanding balance in full will eliminate interest payments and a balloon payment at the end of the loan.

Douglas said the town has just over $1 million in the general fund currently, and even paying out $200,000 will leave the town with a comfortable balance.

“I know the state came down on us at one time for not having enough in the general fund,” said Alderman Dwayne Holmes. “So I just want to be sure this will leave us with an appropriate balance.”

“It absolutely will,” said Douglas. “We have already exceeded our anticipated tax revenue for the year and we still have two months left in the year to add.”

“Are you asking us to authorize paying off the balance, and then we will be free and clear, no more payments or interest,” asked Alderman Albert Smith. “No early payment penalties?”

“That is correct,” said Douglas.

“It’s a blessing if we can do it,” said McBride. “It takes one thing off the books for us to have the fire truck bought and paid for, and it puts us one step closer to a new station.”

It will free the town for other considerations, including what McBride has hoped for over the last several years — the future construction of a town administration complex.

Douglas received permission from the board to ask for Request for Quotes (RFQ) from interested developers on the cost of building a new, all-inclusive facility on the site of the existing town hall and police department, fire department and post office. All four organizations would have space in the new facility, with room for some expansion, said Douglas. Mayor Barbara Mallett led the board in discussing approval of seeking quotes.

Douglas said once he receives quotes, giving him an idea of the overall cost, he plans to send the proposals to state Rep. Harry Warren (R-76) to see if the state is willing to cover “any or all of the cost.” Douglas added that Meridian Brick Company has indicated a willingness to donate the brick for the building should they decide to use it.

The board also authorized Douglas to take $77,438 from this year’s General Fund to pay an outstanding balance to the North Carolina Department of Information Technology for the phone system at town hall.

“There’s been no payment made since 2018,” he said. “And they want their money, understandably. Between what we owe from previous years and what we owe for this year, our balance is about $7,200, so paying that will bring us current. In July, we will begin to allocate a monthly payment going forward so we don’t get behind again.”

There will be a slight increase in the cost for trash collection for residents due to an increase in cost to the town.

“We’re not talking a big increase, are we?” asked Mallett. “Residents pay $16 and change right now, and we’re not going up to something like $18, are we?”

Douglas assured her that the current rate is $16.50 and the increase will raise monthly costs to $16.54 per residence.

Douglas presented the board with an overall town budget of $9.61 million that will be voted on June 6. However, that represents an increase of just over $450,000 for the town over last year’s budget because $4 million in grant funds are included in the bottom line. The portion that will need to come from town coffers is only $5.61 million. Last year’s budget was $5.16 million. East Spencer has received $23 million in a state Viable Utilities grant to repair and reconstruct the water and sewer systems and Douglas said he anticipates using $2 million on each of the projects in the coming year. Most of the increases in town expenditures comes under salaries and benefits.

Finally, the board approved hiring three separate firms for upcoming projects: Withers Ravenel for repairs and reconstruction of the sewer system and lines; Wooten Company for repairs and reconstruction of the water system and lines; and Professional Steward Services for the development of a cybersecurity program for the town. Withers Ravenel is already involved in the sewer project, so Douglas requested that they be allowed to continue, and Wooten Company is a well known water system and infrastructure company specializing in partnering with local governments on clean water improvements.

Initially, Douglas’ plan was to have at least “five percent minority participation in these projects, and Professional Steward Services out of Raleigh is a minority-female-owned company with an excellent reputation.” The grant monies will pay for all costs related to the projects.