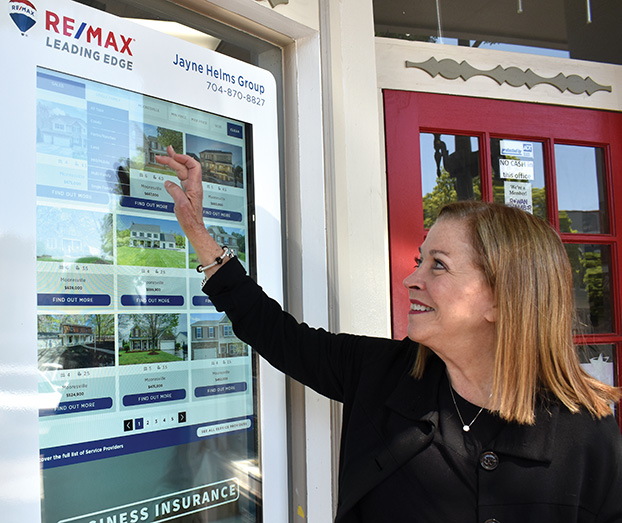 The Jayne Helms Group with Re/Max Leading Edge has installed an interactive touchscreen on its window pane at 108 N. Main St. that allows customers to sift through available homes and properties in and around Rowan County — all while standing on the sidewalk in Salisbury.

Helms said the touch-screen displays are popular in Europe and are starting to catch on in the States. She had never really heard of the device until she was approached by Premier Media Solutions, a company with offices in the United States and United Kingdom. The company installed the screen, which looks like a gigantic iPhone, a few months ago. The screen is available 24/7 for home buyers who want to do some home searching while the office itself is closed.

The screen may be somewhat of a novelty, but Helms said it’s an effective tool for home buyers or sellers. With a live feed of properties from both the Charlotte and Triad multiple listing services, the window gives customers the opportunity to scroll through dozens, if not hundreds, of homes currently on the market.

If a customer finds a property they’re interested in, they can submit an inquiry directly on the device. The inquiry is immediately forwarded to Helms’ office for follow up. Or, Helms said, interested customers can just pop into the office to ask about a property.

“It’s really been a great tool for us to get people to come in off the street,” Helms said.

And acting fast pays off in today’s real estate landscape, according to Helms.

“I put a house on the market two weeks ago and I got 16 offers in two days,” Helms said.

The demand for homes, she said, is being driven by low inventory and relatively low interest rates.

“I’ve been doing this almost 20 years and we’ve never had such low inventory and high demand,” Helms said. “It’s really good. There’s never been a better time to sell a house than there is now. It’s hard to find one, but it’s a great time to sell.”

With mortgage rates projected to increase in the future, Helms said the home-buying frenzy could cool soon. No matter the market, buyers can search for their next home with a few taps of their fingers using the interactive touchscreen at Helms’ office.