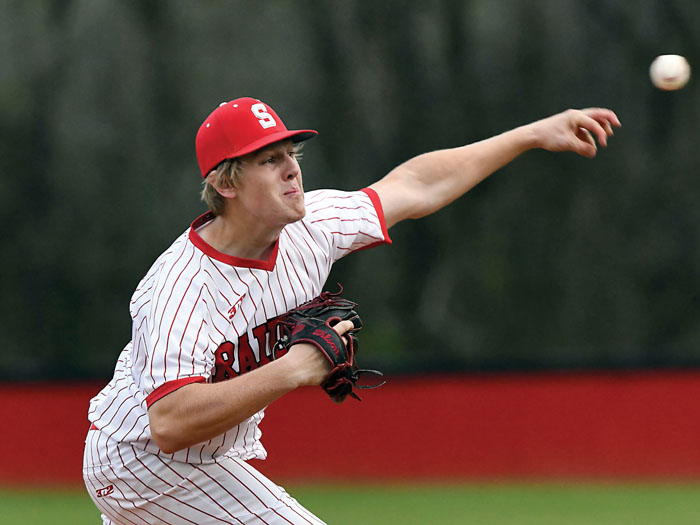 LANDIS — East Lincoln didn’t win the regular-season or conference tournament titles in its league, but the Mustangs employ an impressive army of talent.

The Mustangs, seeded 11th in the 3A West bracket, weren’t the stoutest pitching team in a league that had four of the top 10 3A teams in the western half of the state, but few teams can swing like them. They’ll bring a powerful offense to top-seeded South Rowan for tonight’s Game 1 of a best-of-three 3A Western Championship series.

East Lincoln (20-6) is based in the Lake Norman community of Denver. The Mustangs are proficient in a lot of sports and wear unusual and distinctive colors — green and orange. While making a loud fashion statement, the baseball team has also spoken volumes with its bats. East Lincoln has slugged 34 homers and boasts a team batting average of .345.

Nearly half of those 34 homers were sent into orbit by Garrett Michel, one of the nation’s top mashers. Power-hitting and lefty-hitting second basemen don’t grow on trees, so Michael was heavily recruited. The senior picked Virginia Tech.

Michel is batting .548 with 16 homers and 47 RBIs and has a ridiculous .689 on-base percentage due to frequent walks. When East Lincoln beat conference rival St. Stephens 4-1 in a fourth-round showdown to get to this series, Michel never got a chance to decide it. St. Stephens walked him four straight times. It made sense.

Isaac Armstrong is the next name to know on the East Lincoln roster. A junior committed to East Carolina, he probably will be an infielder in college, but he’s also East Lincoln’s No. 1 pitcher. He is 5-0 with a 2.67 ERA. He’s struck out 63, while walking 11. He’s hit six homers and will probably play third for East Lincoln when he’s not pitching.

Sophomore shortstop Trey Spees is batting .386 and has scored a whopping 36 runs. He had a double and a triple in the fourth round.

Sophomore right-hander Carson Dahle (5-2, 2.68 ERA, 63 strikeouts) won the fourth-round playoff game with a seven-inning effort, so he’s the probable hurler for Game 2 of this series in Denver on Thursday.

The No. 3 pitcher for the Mustangs appears to be Seth Haigler (4-1), who also is the left fielder.

Like South Rowan, East Lincoln will have the head coach’s son on the field. Right fielder Matile is the son of East Lincoln head coach Chris Matile, who wears a lot of caps. He’s also the AD and the defensive line coach for the football team.

South, which has never won a team state title in any major sport, is in the baseball semifinals for the first time since 1980. That was an intriguing bunch of Raiders that won the 1980 South Piedmont Conference championship in a high-scoring matchup with Central Cabarrus on the final day of the regular season. They beat Asheboro at home and South Stokes on the road in the playoffs, before being shut out by Kings Mountain in a one-and-done state semifinal. Those Raiders were coached by Reid Bradshaw. Alexis Cowan was the center fielder, with future NFL punter Tommy Barnhardt and Scott Wise forming the double-play combination. Kirk Hubbard was behind the plate, with Donnie Spainhour carrying most of the pitching load.

South will count on Haiden Leffew, a junior lefty committed to Wake Forest, on the mound in Game 1. Leffew (9-1) has won some big ones this season and the southpaw should have a favorable matchup against an East Lincoln lineup that leans heavily toward the left side. Four of East Lincoln’s toughest hitters — Michel, Houser, Spees and Matile — are lefty swingers.

Those lefties will provide a tougher matchup for South right-handers Carson Crainshaw (8-0) and Chandler Oddie (6-0).

South is strong up the middle defensively, with Liberty signee Kane Kepley in center field, East Carolina signee Nathan Chrimson at shortstop, and Catawba signee Ty Hubbard at second base. Catcher and cleanup hitter Jacob Ritchie has been a consistent force in the playoffs.

Head coach Thad Chrismon topped 200 career wins earlier this season. South (26-4) has won 12 in a row and has set a school record for wins in a season.