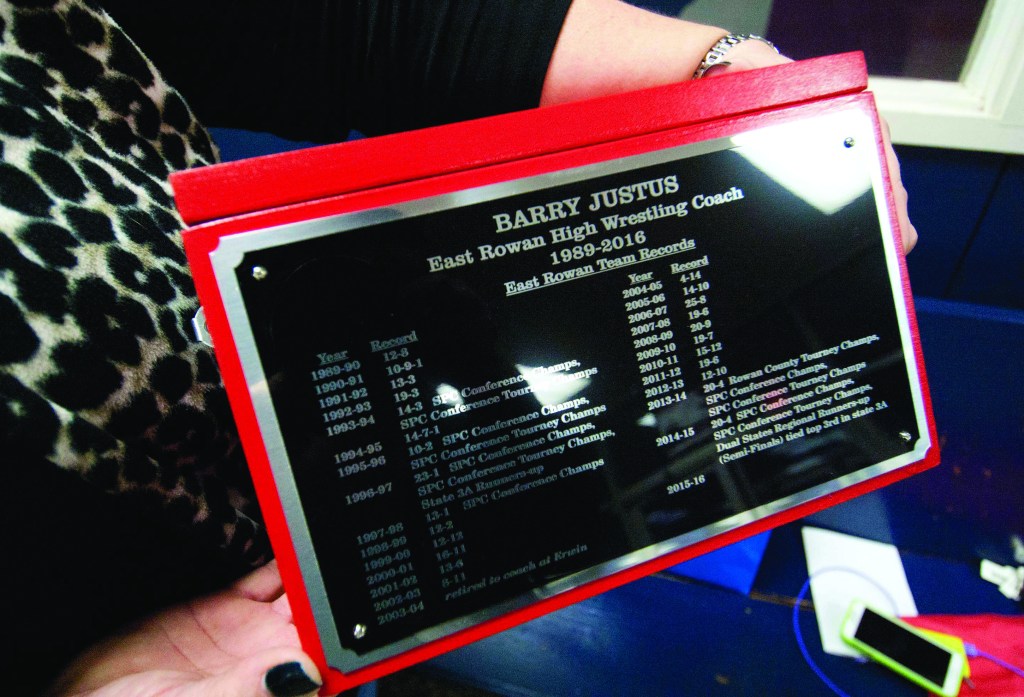 Longtime East Rowan wrestling coach Barry Justus was inducted into the North Carolina chapter of the National Wrestling Hall of Fame in ceremonies held on Sunday in Chapel Hill.

Justus was elected as  part of the Class of 2020, but inductions were delayed  two years by COVID.

At the time of his election, Justus was credited with 391 career wins,  five conference championships, three 20-win seasons and six Rowan County Tournament titles. Eight of his wrestlers wore state champion ribbons, another 12 were runners-up and  38 were state place-winners.

Justus has been known not only for wrestling wins, but for his commitment, character and integrity.

“My legacy is all of my former wrestlers who are out there coaching,”  Justus said when his election was announced. “I’m just very appreciative and humbled about what everybody is doing and that I had some influence in their love for the sport. I’ve got former wrestlers coaching everywhere, it seems. I go to a wrestling tournament and we’ll have an East Rowan reunion. That means a lot.”

Justus will be enshrined at the National Wrestling Hall of Fame & Museum in Stillwater, Okla.

Bobby Crouch, who led Boyden’s 21-0 1957 3A state-championship victory against Fayetteville with 171 rushing yards and two touchdowns, passed away on  Monday in Mount Pleasant, S.C.

Crouch went on to play football for The Citadel.

Rowan County was rained out on Monday.

Greensboro and Rowan will make the game up on July 2 as part of a doubleheader at Newman Park.

North Rowan’s Tai’lah Ward was the Sprints MVP for the Central Carolina Conference, while North Rowan thrower Brittany Ellis was the Field MVP.

Salisbury’s Marcus Cook was  the Field MVP for the Central Carolina Conference, while Salisbury’s Todd Parker was voted CCC Coach of the Year.

South Davidson’s William Lyons, a Catawba signee, was Distance MVP for the CCC.

Salisbury’s Will Koontz is the Central Carolina Conference Player of the Year.

Salisbury’s Milt Griffith was runner-up for CCC Coach of the Year behind West Davidson’s Thompson Skeen.

West Davidson’s Calvin Hawkins was CCC Player of the Year. Webb was runner-up.

Bryson Bebber (South Rowan) has committed to St. Andrews University in Laurinburg to continue his baseball and academic career.

As a member of the Surry Community College baseball team, the first baseman recently was named to the NJCAA Region 10 all-defensive team for the second consecutive year.

Michael Childress of Salisbury shot 70-72-70 to finish 4-under and tied for fourth in the 7th Carolian Amateur Championship at Keith Hills in Buies Creek.

Masingo used a pitching wedge on the 119-yard hole,

Sunday afternoon was full of spectacular weather for the McCanless Couples.

DePalma-Spivey had closest to the pin.