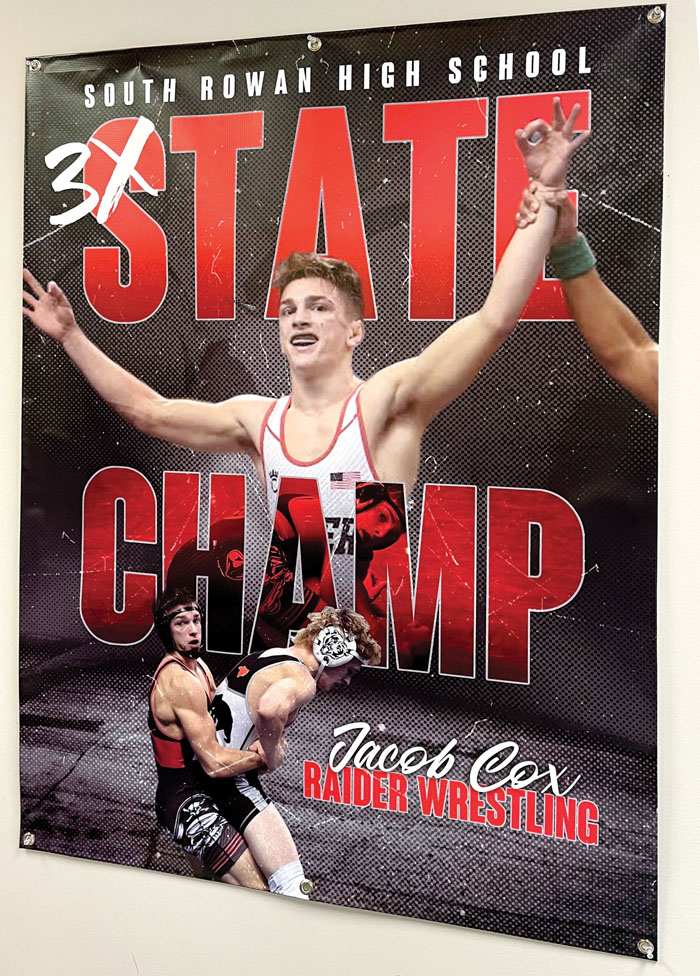 Jacob Cox will be wrestling at NC State next season.

Cox recently crossed valedictorian honors off his to-do list, and he can put that academic award in the trophy case alongside the three state wrestling championships that were an unprecedented accomplishment for a Rowan County wrestler.

“Valedictorian was a goal, something I worked  a lot of years for,” Cox said matter-of-factly. “And I did it.”

Cox ended his high school career with an 82-match winning streak and and finished a remarkable onslaught on the record book with a 142-4 mark. He was undefeated his last two seasons and went 36-0 as a senior.

His place in Rowan athletic history is secure, but now he’s back to 0-0 again. He plans to attack college wrestling with the same focus, desire and energy that got the results he was looking for in high school.

Even with all the victories, and all the pats on the back and and all the accolades, there was some doubt in February that Cox would continue his life on the mat. N.C. State has always topped his list of schools, but getting an engineering degree has always been the long-term priority — even over wrestling in college.

“After visiting N.C. State, meeting with the coaching staff, getting to know the trainers, the advisors and team members, I knew I could make wrestling work there along with the academics,” Cox said. “If I called those people right now with a question, they’d do everything they could to help me. There’s a great motivating culture in place there, not just for wrestling, but for the whole athletic program. I can become a better wrestler there as well as a better individual, and that’s what I was looking for.”

While balancing the time demands of wrestling with the pursuit of an engineering degree would be a challenge for anyone, Cox obviously is a terrific student.

“I’ve been taking college courses the last two years,” he said. “I’m ready for it.”

Cox was voted the Dutch Meyer Award winner or co-winner three times by the wrestling head coaches in the county. That award goes to the Rowan County Wrestler of the Year. He also was recognized for three countywide awards by the Post.

Born into a wrestling family, Cox has benefited from competing for the Charlotte-based Darkhorse Wrestling Club, as well as from the mentoring by his South Rowan coaches.

He has been a factor in national meets, although he wasn’t able to participate this spring.

“I tore up my leg pretty good in the match for the state championship,” Cox said. “I took an elbow to the knee and I was sidelined for a while. But I’ve worked my way back. Right now I’m fine.”

Cox even competed in golf for South this spring.

It was humbling at times and proved he’s not automatically great at everything, but he benefited from soaking up another part of the high school experience with a new group of teammates.

“What golf has in common with wrestling is you’ve got to be completely dedicated to it to be really good at it,” Cox said. “Our best guy (Jackson Black) is dedicated to golf, and it showed. He went to state.  I enjoyed seeing him be successful.”

Cox said he’ll report to N.C. State on June 26 for a five-week program to get the wheels rolling.