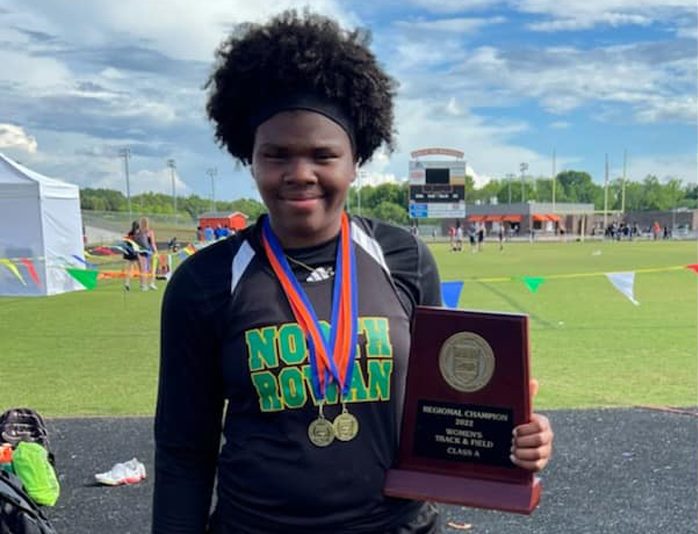 Brittany Ellis won the shot put and discus events in the 1A State Championships. Submitted photo

Bush tried his best to smile as the pats on the back continued. He wanted more than second place.

“Everyone says,’Hey, you guys are back, and, yes, North Rowan is back,'” Bush said. “But at the same time, it’s a heartbreaking feeling to get so close and to come up just a little bit short.”

North stayed perched atop the leaderboard all afternoon, and with just two events left to be scored, North led defending champ Swain County 77-59. That looked like a substantial advantage, but it wasn’t. Next to last in the meet order was the 3200, where Swain piled up 13 points for second and fourth places to to slice North’s lead to 77-72.

Swain is a mountain team from Bryson City, powerful in the distance events, where the Maroon Devils piled up 34 points, as well as the relays and the pole vault, where the Swain girls went 1-2.

North’s sophomore-heavy team did what it needed to do and expected to do in just about every event in which it had qualifiers. North’s strengths are the throws and hurdles.

Top-seeded Brittany Ellis ruled the throws, taking the shot put early on a long day (37 feet, 2 inches) and finding the energy to fling the discus 107 feet, 3 inches for another 10 points.

As expected, Tai’lah Ward won the 100 hurdles in 15.46 seconds and the 300 hurdles in 45.70 seconds. Ward is more hurdling wizard than pure sprinter, but she tacked on fifth-place points in the 100 meters.

Versatile Aniya Brown placed second behind Ward in both the hurdling events, grabbed third in the triple jump and helped the 4×200 relay unit that also included Bailee Goodlett, Bloom Goodlett and Azarea Miller sprint to second place. Swain County was fourth in that event.

Miller contributed to North’s hurdling dominance with a sixth place for three points in the 100 hurdles. North amassed 39 points in the hurdles to Swain’s 3.

The heartbreaking segment of North’s loss was a false start DQ in the 4×100 relay. That’s an event the Cavaliers excel in and it’s one of the four events where they use Ward.

They were seeded third. If they finish in the top five in that event, they’re state champs. That’s how close it was.

“False starts happen, I’ve been there before, and there’s nothing you can do about it,” Bush said. “Just too much tension. It made the difference today, but we just have to suck it up, learn from it, and move on.”

North was seeking its first state championship in girls outdoor track since 2010.

It’s coming. The Cavaliers will be hard to beat the next two years.

“Long day, long meet,” Bush said with a sigh. “But so very proud of our girls today. Big dance, and they did everything we believed they would do. They’ll keep it going.”

Sprinter Amari McArthur was the key man. He was fifth in the 100 and fourth in the 200. McArthur ran with Jerome Blakeney, Kemon O’Kelly and Xavier Suber on the fourth-place 4×100 team. Blakeney, O’Kelly, McArthur and Jabari Hogue placed fifth in the 4×200.

Pharrell Hailey was third in the shot put, while Quintin Wilson took fourth in the 110 hurdles.

Anaston Trexler was seventh for the Gray Stone girls in the 300 hurdles, while Emberleigh Pauley-Brown was eighth in the 1600 and 3200.

The 2A and 3A State Championships were held at North Carolina A&T on Friday.

Salisbury seniors Marcus Cook and Sutton Webb had second-place finishes in 2A.

All the marks and times for state qualifiers from the Rowan schools are in Scoreboard.