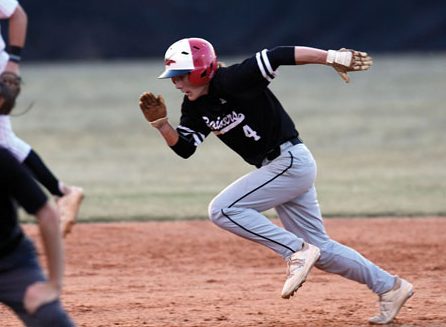 Kepley, a senior headed to Liberty University, saved a run with his arm, created a run with his legs and got the pivotal hit with his bat to key South Rowan’s 7-3 victory against North Lincoln on Friday in the fourth round of the 3A state playoffs.

Top-seeded South prevailed in a game for the ages against East Rowan that attracted a monster crowd in Tuesday’s third round but had to come back down to earth for a matchup with Western Foothills Conference champ North Lincoln.

“We knew we had to refocus,” Kepley said. “We realized how talented and how good North Lincoln was. We knew we were in for a dadgum fight.”

A “dadgum fight” is what it was. South (26-4) trailed on two occasions and was still on the short end heading to the bottom of the sixth.

North Lincoln put a run on the board in the first inning against undefeated South starter Carson Crainshaw, and Crainshaw had to pitch out of a two-on jam in the second to keep the deficit at 1-0.

South got two runs in the third, but probably wouldn’t have scored any if Kepley hadn’t been able to out-run a throw to second base.

“That’s happened a few times this year,” Kepley explained. “Lefty pitcher and I was way out there, looking to go on his first move. I got a little lucky. If the first baseman makes a great throw I’m probably out, but he didn’t.”

That got things rolling for South. Nathan Chrismon’s bunt single put runners on the corners, and he’s as quick as Kepley. He immediately stole second. North Lincoln cut off the throw to second base, hoping Kepley would make a move toward the plate, but he stayed put.

Crainshaw kept it 2-1 in the fourth, but North Lincoln swung the bats with some authority in the top of the fifth.

That inning started with a slow chopper to short for an infield hit. With one out, the Knights (20-6) strung together three consecutive base knocks for two runs. It would have been a three-run inning had Kepley not thrown out a runner at the plate on the last of those singles. That was a huge second out.

“It was a great ball to make a good throw on,”Kepley said. “It was hit very hard and straight at me. I knew they’d try to score the runner from second base. Coming to get it, the only decision I had to make was to throw it home on the fly or get it to (catcher Jacob) Ritchie on one hop.”

Catchers love that one-hop throw, and Ritchie seized the perfect peg and made the tag. He and Kepley have executed on that play before.

“When I threw the ball, I could see the runner was just rounding third base,” Kepley said. “I knew we had him, knew Ritchie would make the tag. There’s a big difference between being down 4-2 and being down 3-2. We kept it 3-2 and even though we trailed, we had some momentum.”

But the bottom of the fifth was Karr’s strongest inning. South went down 1-2-3 for the first time.

North Lincoln still led 3-2 going to the sixth. Crainshaw had piled up strikeouts, but another hit ended his night.

South reliever Chandler Oddie had started getting loose in the fifth. He got the call from head coach Thad Chrismon.

Oddie’s fastball tops out around 82 miles per hour, but movement and location are far more important than sheer velocity. Headed to Catawba Valley Community College, Oddie has turned in an amazing season — 6-0, plus four saves. The senior right-hander has been in a ton of tense games. He would get the job done one more time.

“The biggest thing coming into a game out of the bullpen is to throw strikes,” Oddie said. “Throw strikes and let your defense work. With the movement I’ve got, I tend to get a lot of groundballs. So I’m thinking if I can get a groundball, we’ll get a double play. Our defense is second to none. Groundballs with a man on are double plays.”

The groundball went to second baseman Hubbard. He started the 4-6-3. Shortstop Chrismon turned it. They’ve been working together for four years of high school ball — and a lot more before that. First baseman JD James finished the play.

Now South was ready to hit. Oddie was the first man to the plate in the bottom of the sixth. Crainshaw could have re-entered to hit for Oddie, but then Oddie, who hadn’t started the game, would have been done for the night.

“I don’t get to bat much,” Oddie said. “Just trying to find a way to get on base and try to help us get back to the top of the lineup.  I knew if I got on, we could put in a fast (courtesy) runner for me.”

“That was a really special at-bat he had there,” Kepley said. “One of the biggest of the game.”

Two more walks followed.  Now Karr was out of the game. Down a run, South had the bases loaded with no outs.

North Lincoln turned to slugging shortstop Matt Heavner, an N.C. State recruit, as its relief pitcher. Heavner had started getting loose in the bullpen while North Lincoln was batting in the bottom of the fifth. He had to use the South bullpen, as the visitors’ bullpen area was over-run by the massive crowd.

Brooks Hubbard, cross country runner, brother of Ty Hubbard and youngest son of Northwest Cabarrus coach Joe Hubbard, was running for Oddie. When Heavner bounced  a curveball to the backstop, Hubbard sprinted home from third, and it was 3-all.

Finch McMillin grounded out, with no advance by the runners, but now South was back to the top of the lineup.

North Lincoln had been forced to re-arrange its defense when Heavner went to the mound. There was a new third baseman, with the original third baseman moving to shortstop. That may have factored in to what happened next. Kepley was the plate.

“I’m just looking to barrel something, get it to the outfield, get a run in,” Kepley said.

“If Heavner is still at shortstop, maybe he’s able to make a play on that ball,” Kepley said. “But we’ll take it.”

One mishandled throw later — the only error of a well-played game — and it was 6-3. Another RBI single by Ritchie, and it was 7-3.

North Lincoln managed one baserunner against Oddie in the seventh, but that was it. Right fielder McMillin caught a long flyball to end the game.

Ritchie, Kepley and Colton Fisher had two hits each. South was out-hit 9-7, but that stat meant very little.

South moves on to the best-of-three Western Championship Series. The Raiders will play another Western Foothills team — the 11th-seeded East Lincoln Mustangs (20-6).

South will be at home for the first game of the series on Tuesday. The Raiders will travel to Denver on Thursday for their first road game of the playoffs. If a third game is needed, it would be played at South Rowan on Saturday.

“It’s been a nice advantage for us to play all these home games,” Kepley said. “We’ve got a ton of support.”