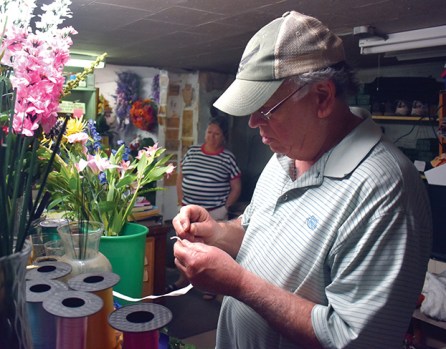 David Harrison works on a corsage for a customer. With decades of experience in the flower business, Harrison can put together an arrangement in a matter of minutes. Ben Stansell/Salisbury Post 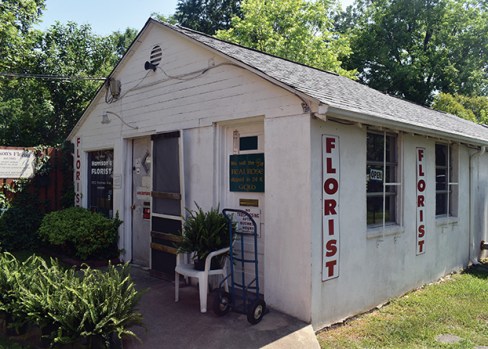 David Harrison has a short commute, only having to walk a few steps from his house to the florist shop in his backyard. Ben Stansell/Salisbury Post 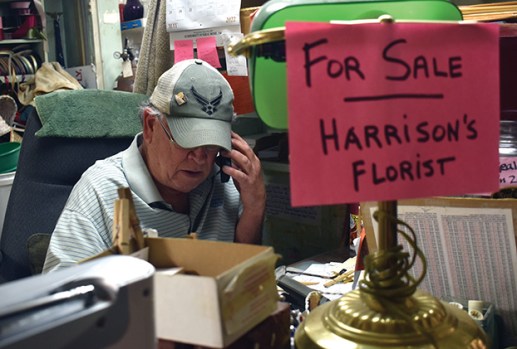 SALISBURY — Five years ago, David Harrison had every intention of leaving his family’s flower business in someone else’s capable hands.

He’s still assembling arrangements and curating corsages in his backyard florist shop at 1012 Holmes Ave. His trusty dog, Louie, continues to watch the action unfold from his perch on a well-worn green leather chair.

Harrison hasn’t yet called it a career, but he has changed the way he approaches running Harrison’s Florist.

Harrison, 74, may work seven days a week, but he sets his own schedule. Some days, he’ll make the short walk from his home to the shop behind his house as late as 10 a.m. Most days, he leaves the shop in the early afternoon. He calls it semi-retirement.

No longer is he afraid to leave the shop unattended during the day. He’ll cut out for a few hours here and there to pursue his passion of finding treasures at yard sales. But he always keeps his phone handy in case a customer calls.

Those are just some of the ways the business has changed since Harrison started running the shop in 1975, taking over from his parents who opened it 30 years prior.

Back then, florists were “the place” people went when they wanted to make someone feel appreciated, loved or remembered. During the first three decades Harrison’s Florist was in business, Harrison’s parents sold more than a million roses. That’s when there were more than two dozen flower stores around Salisbury. In the years after Harrison took over, that number started to decrease.

He made it a goal to make sure Harrison’s Florist made it to the final four, and by his count he’s one of only three independent shops still standing locally. The shop’s longevity may be a testament to its reputation for customer service.

“It makes me feel honored when someone calls me up and I know this person has called me 50 times over the years,” Harrison said. “Apparently, I’m doing something right.”

Aside from a delivery driver, Harrison does all of the work himself. He takes calls, makes the arrangements, even signs the cards that go with them. That last job got him in a jam one time years ago when he signed a card “I can live without you” instead of “I can’t live without you” like the customer wanted.

“I didn’t charge him for those flowers,” Harrison said.

And the next year, the customer was calling again to place an order.

Even though the number of florists have declined, Harrison can’t envision a day when florists go completely extinct.

“The florist business will always exist,” Harrison said. “This is the motto I advertise and live by and it fully explains the florist business: In the beauty of flowers, life’s most treasured words are expressed.”

And that’s one reason why he still loves what he does.

“I come to work every day and I don’t even feel like I’m coming to work,” Harrison said. “It’s something that’s in my life. I enjoy it and I do it at my speed, at my pace, at my level. And I talk to a lot of great customers.”

Harrison hopes someone else will come along who loves the business just as much. He is still eyeing retirement — a pink “For Sale Harrison’s Florist” sign on his desk makes that clear. But he wants to leave the business in the hands of someone who has a passion for flowers. He already has his pitch ready.

“I’d be willing to sell the business at a very reasonable price,” Harrison said. “You’re going to get a florist that has an excellent credit rating for 75 years, and you own a florist with a five-star rating.”

It’s true. Harrison’s Florist has a five-star rating from the Rowan County Florists Association, and Harrison has the plaque to prove it.

Harrison doesn’t want someone who is disillusioned about what being self-employed is all about. It can be a lot of work, Harrison said. But when the business works for you, it can also be a beautiful thing.