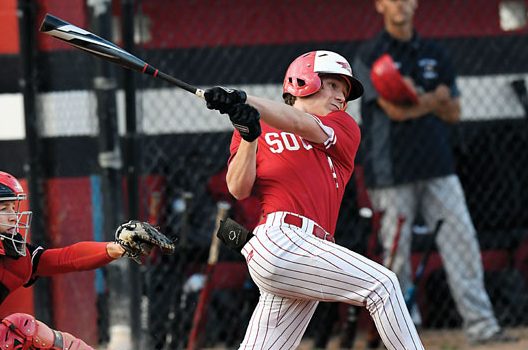 South Rowan's Kane Kepley had a key hit and a base-running gem in Friday night's playoff victory. File photo by Wayne Hinshaw, for the Salisbury Post

LANDIS — Kane Kepley got the big hit and contributed the key base-running play and the key defensive play as South Rowan extended the best season in school history with a 7-3 home victory against North Lincoln on Saturday.

The fourth-round victory sends coach Thad Chrismon’s team into the best-of-three Western Championship Series against 11th-seeded East Lincoln. That series will start at South on Tuesday.

Top-seeded South (26-4) extended the school record for victories in a season behind the combined pitching of starter Carson Crainshaw, who took the Raiders into the sixth inning, and unbeaten reliever Chandler Oddie (6-0).

North Lincoln (20-6) scored first, but Kepley’s speed ignited a two-run South third. He led off that inning with a walk.  Kepley appeared to be picked off first by freshmen lefty Kellen Karr, but he took off and beat the throw to second base. Nathan Chrismon’s bunt single put runners on the corners. Chrismon stole second. Ty Hubbard’s groundout scored Kepley before Jacob Ritchie’s single plated Chrismon for a 2-1 South lead.

North Lincoln’s fifth inning began with a slow bouncer for an infield hit. With one out, the fifth-seeded Knights strung together three straight hits against Crainshaw to take a 3-2 lead. It would have been 4-2, but Kepley, the center fielder, threw a one-hop strike to catcher Jacob Ritchie to nail a runner at the plate for the second out.

Oddie replaced Crainshaw after another North Lincoln hit opened the sixth and got a 4-6-3 double play to get South out of trouble.

The bottom of the sixth proved decisive. Oddie doesn’t bat much, he drew a walk against a tiring Karr to start the inning. Two more walks filled the bases, and with Karr reaching the pitch-count limit, North Lincoln summoned shortstop Matt Heavner to the mound.  A wild pitch scored Brooks Hubbard, who was running for Oddie, with the tally that made it 3-all.

Finch McMillin grounded out, with the runners remaining at second and third, but Kepley’s two-run single broke the tie and put the Raiders ahead 5-3.

A mishandled throw led to another run, and Ritchie’s second two-run single of the night provided a 7-3 cushion.

Then Oddie closed out the victory. McMillin squeezed a long flyball to right for the final out.

Ritchie, Kepley and Colton Fisher had two hits each for the Raiders.

North Lincoln out-hit South 10-7, but the Raiders move on.