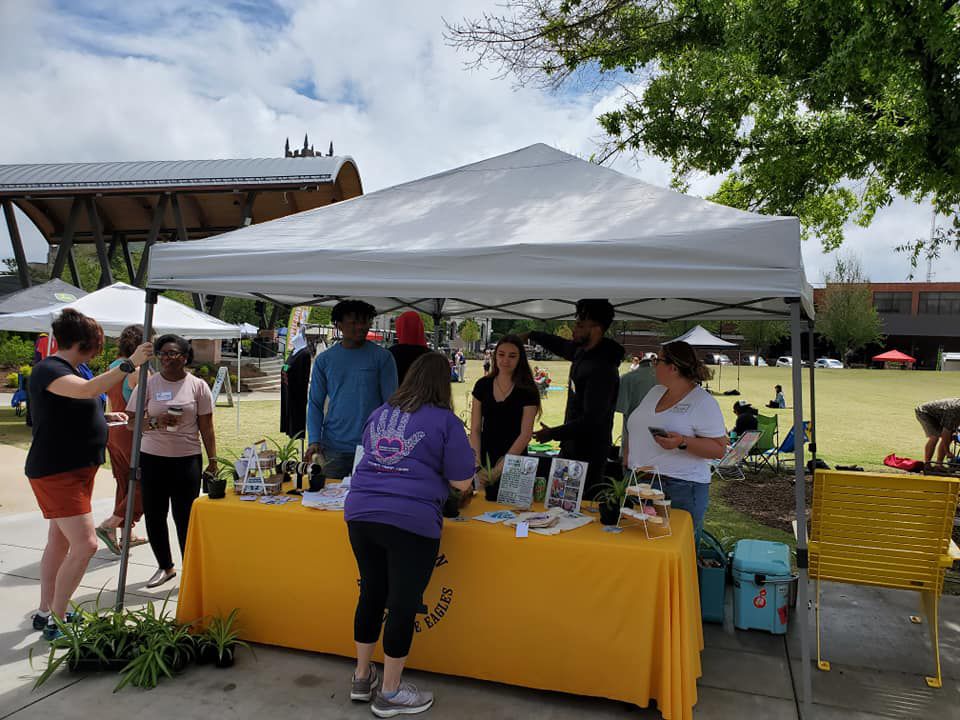 SALISBURY — Henderson Independent School students were spreading the green and collecting some green for a good cause over the weekend.

The school had its own stall across from the Happy Roots stall at the nonprofit’s Earth Day Jam fundraiser, which was called off the past two years due to the pandemic. It was a free event in Bell Tower Green this year and Henderson jumped in as a vendor.

Henderson career and technical education teachers Ashlyn Coble and Brianna Allison both worked with their students on projects in their subject areas.

Allison’s students designed and added graphics to shirts and tote bags. One student in her entrepreneurship class made homemade soaps for the event. The sales for everything the students made added up to about $1,000, half of which will go to the school to upgrade its gardens and the other half to Happy Roots.

Henderson has a special relationship with Happy Roots. The gardening nonprofit started out working with the independent school and Honbarrier is a regular at the school.

Coble said she saw the impact of the nonprofit’s programs before she was a teacher at Henderson. Her own child benefited from the local gardening programs and Henderson officials decided they wanted to give back.

“What she is doing is a fantastic thing for the local schools and community gardens,” Coble said. “She has given so much to our community and our school.

Coble said school officials also wanted to raise their own funds to upgrade its garden rather than rely on Happy Roots to do it for them.

This was also a chance for teachers to show off what their students are capable of and put Henderson in the public eye. Allison said she wants to change the perception of the school.

“From the time we first came into the building we felt we were going to do something big and we are going to make a change,” she said. “When we found out about the Earth Day Jam, we thought this was finally a chance to showcase our school and our students.”

Henderson is an alternative school that uses the state model to serve a small number of students who are typically referred there because of a serious conduct violations. Other students attend for various reasons as well.

The Rowan-Salisbury Schools Board of Education has praised the work of the school in recent years for its effectiveness. The school has therapeutic programs like the gardening work provided by Happy Roots. The school tries to get students to the point they can reintegrate into regular schools.

“Volunteers like Ashley help the students put their hands in a variety of things that aren’t just their classwork to help them get back to that point,” Coble said.

Allison said the jam was a way to showcase how talented the school’s students are and dispense with stereotypes.

“They were able to see Henderson actually does good students and the students are more than they thought they were,” Allison said.

Haley Brewer, a 10th grader at Henderson, helped make shirts, seed paper and the seed bombs, but she also designed some of the shirts. A phrase that inspired one of her designs was “grow through what you go through.” She thought the phrase fit what the students were doing well.

“Growing up I didn’t go out a lot and I was a really shy person, but since I got transferred to Henderson I made a lot of new friends and I wanted to help,” Brewer said.

Brewer said the experience, and raising the amount of money the school did, made her proud.

“It made me feel way more confident in myself,” she said.

Allison credited Brewer for helping her with the entire process.

Brewer was planned to transition back to a regular school after the end of the school year, but her family is moving to another area.

Coble said students leaving Henderson is a bittersweet experience and Allison said she has watched groups of students like those who helped with the fundraiser grow while they are there.