Clayton Trivett is seen when he was part of the Salisbury Hornets' 2015 coaching staff. File photo by Dennis Davidson, Salisbury Post.

SALISBURY — Clayton Trivett watches his 3-year-old son’s soccer practice on a sleepy Wednesday afternoon and daydreams about the daughter he and his wife are expecting.

He also daydreams about Friday nights and packed football stadiums, and who can blame him?

Seeking more family time, Brian Hinson, who guided a dramatic surge by Salisbury’s football program, has cut back his duties to serving as AD. 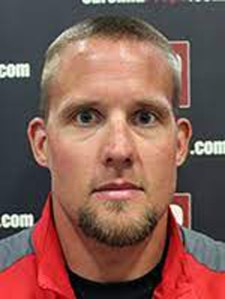 Trivett, 37, is the man who’s been named to succeed Hinson as head football coach.

It’s an important hire. The football team has provided piles of positives for the school and has boosted community spirit through the roof. Salisbury football has become Rowan County’s flagship team over the last three seasons.

Following Hinson on the practice field and on the sideline at Ludwig Stadium is a humongous task. Salisbury football has been a factor statewide in 2A in recent seasons — state runner-up in 2019, state champs in the spring 2021 season and so dominant for most of the 2021 fall season that 11-1 and a third-round playoff exit was generally viewed as a disappointment.

When 11-1 is disappointing, you’ve arrived in the big-time. Salisbury football is a very big deal.

When Trivett saw the Salisbury job posting, he was surprised and energized.

“It’s a job that I looked at as a great opportunity,” Trivett said. “When I saw the Salisbury job was open, I called Brian and the first thing I asked him was,’Are you crazy?’ You’ve got the chance at Salisbury to make an impact on a lot of kids, and you know you’re going to have a chance to compete at a high level year-in and year-out. Salisbury is a place that’s been a special part of my life. I jumped at the chance to apply.”

As an offensive lineman, Trivett grew up out of the spotlight. But he was good enough at Thomasville High to get a chance to play for Catawba College.

He graduated from Catawba in 2007 and embarked on a coaching career. For the next six years, he was an assistant coach at East Montgomery, Randleman and Trinity. He got his first head-coaching shot at Trinity in 2013.

He came to Salisbury High in 2015 and served as offensive coordinator for a year.

In 2016,  he was tabbed to revive a doormat Central Davidson program. The massive rebuilding project took a while. Central lost 42 out of 43 over a four-year stretch and once had a 34-game losing streak.

Trivett stayed the course, and in 2019, he began employing an offense that better suited his team’s personnel — the ground-and-pound double wing. Central made a jump to 6-5 in 2019, a season that was viewed as a miracle. Central was 5-2 in the COVID-shortened season played in the spring of 2021. Central was 7-3 in the fall of 2021, racking up school records for points per game (45.3) and rushing yards per game (468.3).

Does that mean the double-wing is coming to Salisbury?

Trivett is still a spread guy at heart.

He employed the double-wing because it gave Central a chance to control the ball and win games against teams that had more athletes.

At Salisbury, no drastic chances are expected. There’s rarely a shortage of athletes. The Hornets will still be run-first, probably, but with plenty of passing mixed in.

“Salisbury’s offense isn’t broke, so I’m not going to try to fix it,” Trivett said. “It’s late in the school year and Salisbury didn’t get to do any spring work, so this summer we’ll stick with what worked for them last year. Hopefully, all the coaches on the staff will stay. And I’ll have Brian Hinson to lean on. He’s got a lot more experience than I do.”

Salisbury quarterback Mike Geter, Rowan County Offensive Player of the Year, is a sophomore. Bruising back JyMikaah Wells is a junior who could break the school’s career record for rushing yards on opening night this fall. Receiver Deuce Walker is attracting Division I offers. Graduation losses will be heavy, but there’s still talent on hand.

Trivett lives in Davidson County, but only about 20 minutes from Salisbury High, so he won’t have to uproot his family. He does acknowledge that if gas prices stay sky-high, he may have to trade in his truck.

Trivett is a dedicated runner and conditioning expert who has trimmed down considerably from his playing days. He played at about 285 pounds, but he looks a lot longer and leaner now.

He expects to move into a weightlifting/strength and conditioning role at Salisbury at some point in the future, but his first duties on the staff will be in the role of “graduation coach.”  He’ll be working with students who are at risk of dropping out or failing to graduate. It’s a chance to make an impact beyond the football field.

He’ll finish out what’s left of the school year at Central Davidson before taking charge of the Hornets.