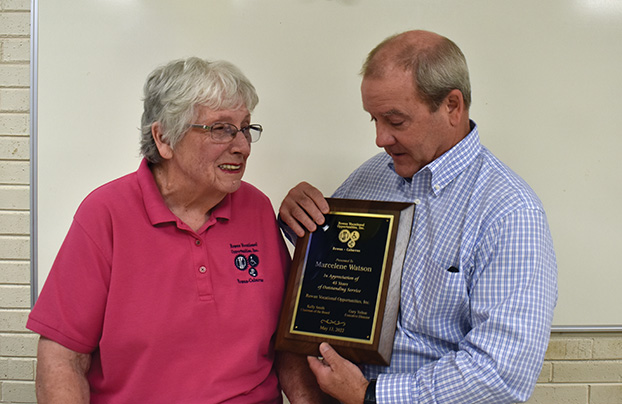 SALISBURY — If you wanted to talk with Marcelene Watson on Friday morning, you had to wait your turn.

Seated in the break room of Rowan Vocational Opportunities, Watson received wave after wave of well wishes as coworkers and clients alike offered congratulations on her retirement. She soaked in every hug and handshake, but if it had been up to her, the party wouldn’t have even happened.

“I wish I didn’t have to retire,” Watson said.

That’s how much Watson has enjoyed every second of the 45 years she’s spent working at RVO. But due to the 87-year-old’s health, she was forced to call it a career earlier this year. In those four and a half decades Watson helped hundreds, maybe thousands, of people with disabilities find purpose through employment.

“Nobody stays with the same company anymore, even for two years probably,” said Gary Yelton, executive director of RVO. “But she dedicated her life to this work in this field, serving folks with intellectual and developmental disabilities. I think it’s pretty commendable.”

RVO offers clients a number of employment options through several different companies, from assembling instructional kits to constructing flag poles. Much of the work is done on the work floor inside RVO’s 27,000-square-foot facility at 2728 Old Concord Road under the supervision of people like Watson, who are called direct support professionals.

Born in Maryland, Watson’s family moved to Rowan County when she was 3 years old. For most of her early career, she worked in sewing factories. Looking for something with more purpose, Watson left her sewing job in 1977 and went to the unemployment office. They sent her to Rowan Vocational Opportunities.

“I came to work on Monday and I’ve been here ever since,” Watson said.

Watson discovered newfound purpose in the position, and she relished the challenge. Watson’s job at RVO was to help onboard clients by identifying their skills and walking them through the steps of a certain position on the production floor.

“We have people here who have never had a job,” Watson said. “Working with each one individually you teach each one a job, teach them how to do something.”

Nothing made Watson happier than the moment an individual mastered a skill.

“The look on their face is enough to give you a reward and a half,” Watson said.

From the beginning, Watson displayed a penchant for helping individuals of all abilities find a place at RVO.

“She has worked with several of our clients who have had difficulty with behavior problems throughout their time,” Yelton said. “Marcelene has been able to get more out of individuals and help them have more success when other supervisors could not. I would put her in the top of any direct support professional in the state of North Carolina easily. She is an expert at what she does.” 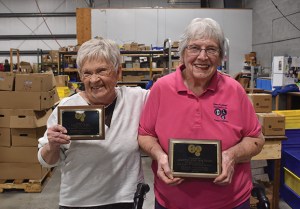 Marcelene Watson, right, stands with Laquita Hazel, who she worked with for many years at Rowan Vocational Opportunities. Watson will be missed at RVO, especially by the individuals she helped teach and supervise on the production floor. Ben Stansell/Salisbury Post

One success story that still sticks out in Watson’s mind is the time she finally coaxed words from an individual who had previously been silent. The man had a speech impediment and people had made fun of him earlier in his life because of the way he talked. Watson encouraged him to speak up and made sure everybody at RVO was patient while listening to him. Eventually, Watson said she couldn’t get him to stop talking.

Over the years, Watson became close with her clients. Some of them referred to her as Ms. Watson, but others just called her grandma.

“She’s got that nurturing, grandmotherly type of attitude,” said Wilson Cherry, who worked alongside Watson at RVO for several years. “I respected my grandmother because she was loving, kind and warm, but she’s also firm and very fair. She leads by example. Ms. Watson has been very active in the welfare of everybody here.”

When a client was out sick, Watson checked on them. If someone had a birthday, they could always expect a card from her.

“This is my family and I love every one of them,” Watson said.

That’s what she’s missed the most since retiring earlier this year — the people. The people will miss her right back.

“She’s a wonderful lady,” Cherry said. “She’s been a blessing to me.”

Yelton and others will miss Watson’s comforting hugs, the best remedy for a difficult day on the job.

Watson’s big sendoff on Friday included lunch, cake and plenty of heartfelt thank-you’s. Yelton presented Watson with a plaque recognizing her service to the organization and a card from all of the staff members.