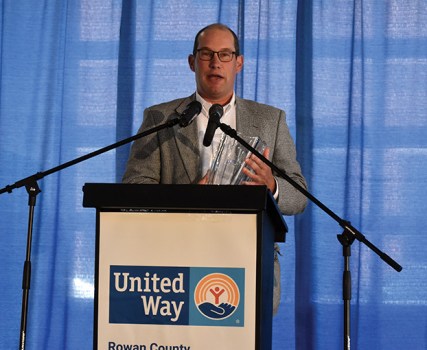 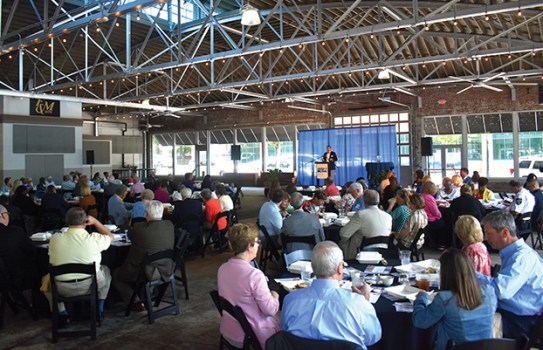 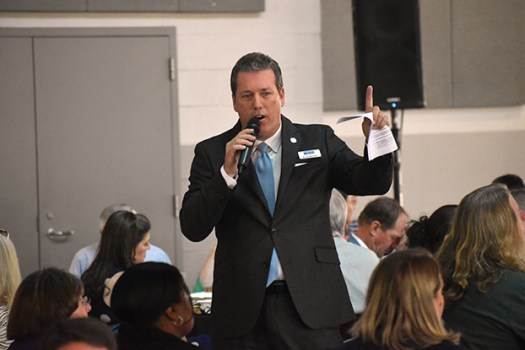 F&M Bank CEO Steve Fisher orchestrates a thought exercise during the Rowan County United Way's awareness luncheon on Wednesday, May 18. Fisher told attendees to close their eyes and envision how they could positively impact the community. Ben Stansell/Salisbury Post 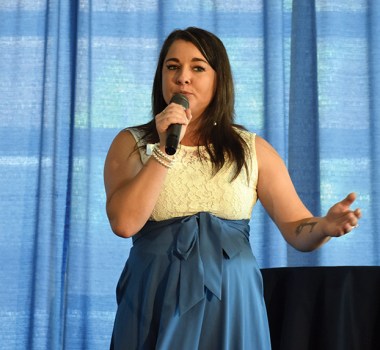 Rowan County United Way Executive Director Jenny Lee outlines how the organization plans to blaze a new path in the coming years through an initiative to raise $6.1 million and open a community hub where organizations can collaborate and pool resources. Ben Stansell/Salisbury Post.

SALISBURY — The world is changing.

That’s what United Way Board President Andrew Smith told a room full of Rowan County leaders during the organization’s luncheon held at the F&M Trolley Barn on Wednesday.

“Economists like to talk about the VUCA world,” he said, “which is an acronym that stands for the volatile, uncertain, complex, ambiguous world that we live in.”

The landscape for nonprofit organizations like the United Way is shifting just as rapidly, he said. For example, one of the United Way’s primary fundraising tools, workplace giving, has declined 35% during the last 25 years.

While that may sound daunting, Smith assured the crowd that United Way is prepared to adapt.

“Your United Way accepts and embraces these changes and we understand that change is a constant in our world,” he said. “We should embrace the change and not run from it, which enables us to be proactive in a VUCA world and not reactive. As the world changes, so is your Rowan County United Way.”

Over the next three years, the United Way plans to raise a little over $6.1 million so it can continue to support local nonprofits, bolster its Community Chest Fund and open The HUB, a physical gathering place where organizations, businesses and community leaders can pool resources and collaborate.

“What I have seen in working with all these different nonprofit groups is that there may be times where we don’t intentionally do it, but we’re segmented in the services we deliver or we duplicate services,” Lee said. “Or some may have a modest budget and can’t afford an office, or internet or a phone. We want to be able to provide not just grants, but really push forward with giving out in-kind resources and make sure nonprofits feel the support of their United Way.”

The HUB will be a place for food drives, nonprofit workshop classes, board training and more.

The HUB will house the United Way’s small staff, who currently work on the second floor of the Salisbury Post building, but Lee envisions it being much more than just a new office.

“It would not be United Way’s HUB: Center for Collaboration,” Lee said. “It would be all of this county’s. It would serve everyone.”

Lee said United Way has already identified a space for The HUB and is “working with a few folks to see what we can do to make that happen.”

United Way aims to raise $2.7 million to make The HUB a reality.

“What we’ve been able to do is if any of our nonprofits has a crisis like a van breaks, a leaking roof, one of their coolers doesn’t work for their feeding program, we can go into the Community Chest Fund and provide some emergency relief for nonprofits,” Lee said.

Lee said money in the fund will also be used in the future to help cover expenses for The HUB.

To reach its overall goal of $6.1 million by the end of 2024, the United Way plans to adjust its fundraising tactics. The cornerstone method of giving by payroll deduction continues to be less profitable, so the organization will focus more on individual major gifts and diversifying income sources.

That doesn’t mean the United Way is abandoning its annual fundraising campaign. Held each fall, the campaign is a combination of voluntary payroll deductions, individual gifts and other contributions. The money raised is used to support projects proposed by local community investment partners in the areas of substance abuse, mental health, healthy lifestyle behaviors and basic needs. United Way is currently vetting applications for community investment partners.

Lee said the campaign will still be an integral part of the organization’s efforts and United Way is working to formulate a monetary goal for the fall.

The United Way did more than just unveil a new path forward during the luncheon. They also took time to recognize the late Bill and Nancy Stanback with a new award in the couple’s name. The Stanbacks gave to numerous causes in Rowan County, including the United Way. Years ago, Bill gave a significant gift to start the Rowan County Alexis de Tocqueville Society. Members of the society give a gift of $10,000 or more on an annual basis.

“This paved the way to encourage others to support their local United Way as Bill truly understood the vast number of lives our organization impacts on a daily basis,” Lee said.

Jason Walser, executive director of The Blanche and Julian Robertson Family Foundation, accepted the award on the family’s behalf and will deliver the award to the family soon.

During the luncheon, Salisbury Mayor Karen Alexander also read a statement from Salisbury native and former U.S. Senator Elizabeth Dole. Dole was planning to attend the luncheon, but could not make it due to a conflicting commitment with her foundation.

An excerpt from Dole’s letter:

“As the theme of today’s event is, ‘The Heartbeat of our Community,’ I will close my note with a quote from a beloved man, Mr. Fred Rogers. Fred once said, ‘At the center of the universe is a loving heart that continues to beat and that wants the best for every person. Anything that we can do to help foster the intellect and spirit and emotional growth of our fellow human beings, that is our job. Those of us who have this particular vision must continue against the odds. Life is for service,’ — to make a difference, a positive difference in the lives of others.

Ladies and gentlemen, thank you for being the loving heart that beats for Rowan County. Today, let us all recommit to lives of service and spirits of unity, for the good of our community and the strength of our nation.”