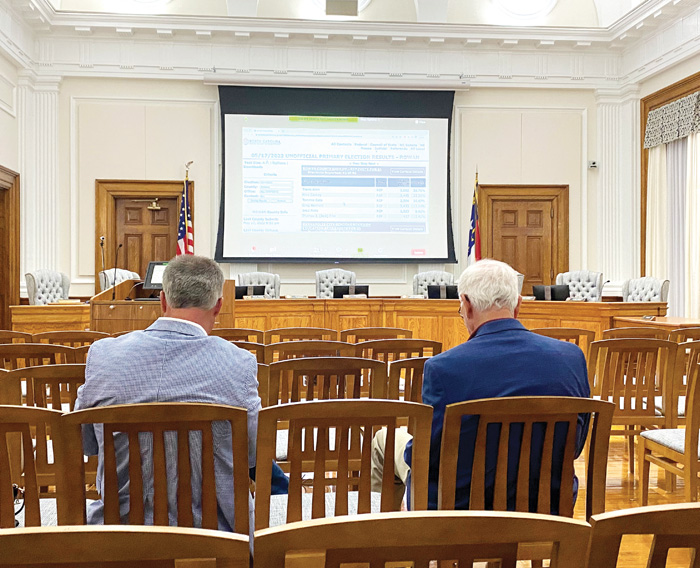 Commissioners Greg Edds, left, and Jim Greene watched together as the results of Tuesday's primary rolled in. Fellow Commissioner Judy Klusman was also watching the numbers. All three incumbents moved on to the general election, according to unoffical results. Ben Stansell/Salisbury Post

SALISBURY — Greg Edds, Jim Greene and Judy Klusman watched together in the Rowan County Board of Commissioners chamber Tuesday night as the primary election results scrolled onto the screen before them.

As the unofficial tally currently stands, the three Republican incumbents will advance to the general election in November. Edds, current chair of the board, received 10,458 votes, the most of any candidate in the race and 26.58% of votes cast in the race. Vice Chair Jim Greene wasn’t far behind, securing 9,513 votes and 24.18% of the votes cast. Klusman, who earned 6,871 votes, finished less than a percentage point ahead of challenger Angie Spillman, who finished with 6,671 votes. Michael Julian came in fifth with 5,828 votes, or 14.81%.

“I feel very grateful for people’s support,” Klusman said. “It’s an honor to serve and it is public service.”

Due to the fact that she was separated from Klusman by less than 1%, Spillman has the ability to request a recount. A recount would be completed once the provisional and absentee ballots are counted on May 26.

For now, though, Klusman is looking forward to moving on to the general election and the possibility of serving a third consecutive term alongside Edds and Greene.

“I think it’s the old saying of, if it ain’t broke, don’t fix it,” Klusman said.

Edds said he thought the results of the primary indicate that Rowan residents are happy with the county’s current direction.

“It’s a validation not necessarily of the election but all the work you’ve been doing over the past four years,” Edds said. “A tremendous amount of good is happening and folks voted that they recognized that, and that’s a good thing.”

Greene said he doesn’t expect much to change if the three prevail in November.

Facing the trio in November will be Democrats Alisha Byrd-Clark and Sam Post. While Byrd-Clark, who currently serves on the Rowan-Salisbury Schools Board of Education, is serious about being elected as a commissioner, Post said his campaign is more about bringing attention to issues than actually winning the race.

In the meantime, Edds said the board will look to finalize a budget for fiscal year 2022-2023. A budget will be presented to the board before the end of June and must be passed before July 1.

Even though Edds, Greene and Klusman came out ahead on Tuesday night, all three commissioners were disappointed to see fellow Commissioner Mike Caskey finish second in the Republican primary for Rowan County Sheriff, losing to Travis Allen.

“Mike Caskey is one of the finest men that we have ever known,” Edds said. “It has been our honor to work with him. He is such an important part of this team. We looked forward to working with him as sheriff, but we’re just honored to be back with him on the board.”

Caskey’s term as a commissioner lasts through 2024.

Julian said he “wasn’t pleased” with the results, but made peace with the outcome.

“As I’ve told folks here the last couple of weeks, if this is what the good Lord wants then that’s what’ll happen,” he said. “And if it’s not, then it won’t.”

Julian foreshadowed another run for the board in two years, but didn’t completely commit to running again.

“I guess you could say we’ve laid some groundwork for 2024,” said Julian, currently a member of the Rowan County Planning Board.

Spillman could not be reached for comment on Tuesday night.