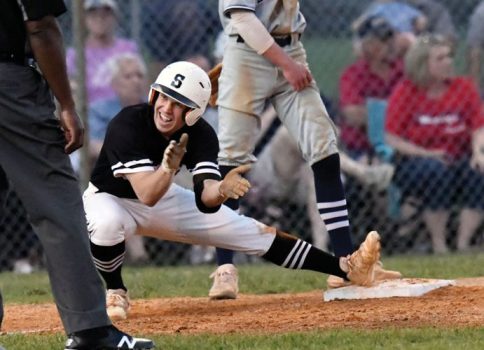 South's Nathan Chrismon made it to third base after hitting a long fly ball that led to an error in the outfield. photo by Wayne Hinshaw, for the Salisbury Post 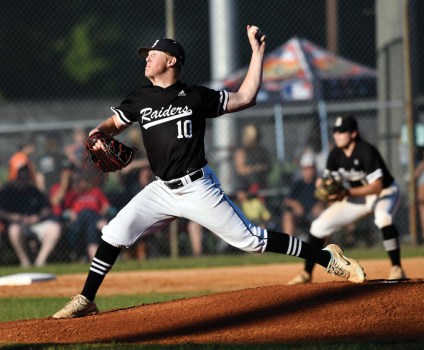 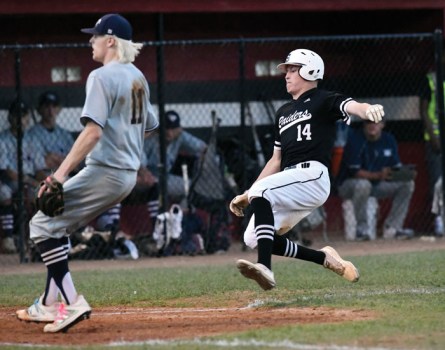 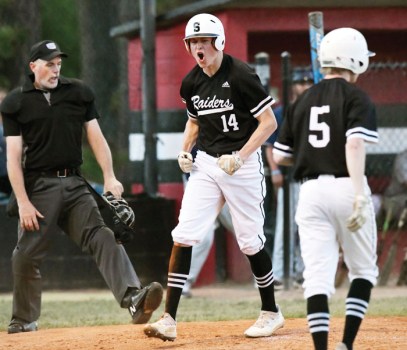 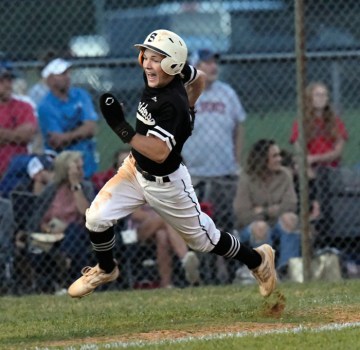 South's Kane Kepley 4 rounding 3rd base to score. photo by Wayne Hinshaw, for the Salisbury Post 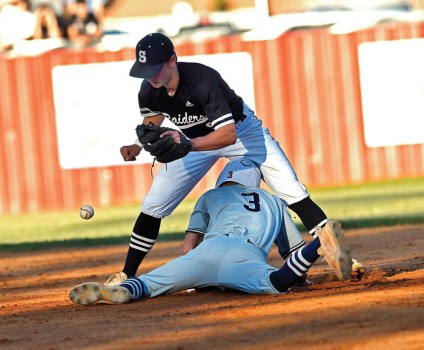 LANDIS — South Rowan’s special baseball season got a lot more special on Tuesday, as the Raiders handled East Rowan 8-3 in the third round of the 3A state playoffs.

Top-seeded South has not only won a school-record 25 games, it’s won three out of four against the ninth-seeded Mustangs, who have three ACC signees/commits. East closed the books at 25-5.

Two 25-win teams in the county this season wasn’t entirely unexpected. South and East both lived up the hype, but the Raiders are the last team standing, just as they were in 2021.

South (25-4) got a terrific start on the mound from junior Wake Forest commit Haiden Leffew, who reached the pitch-count limit of 105 in the sixth inning with South in control, 8-2. Chandler Oddie was able to get the last four outs with the help of a line-drive double play in the seventh.

The only loss for Leffew (9-1) this season came against East and UNC recruit Cameron Padgett (10-1), but Leffew won an even bigger showdown on Tuesday.

It has to be the biggest victory in the history of South’s program and it propels South into a fourth-round home game that is scheduled to be played on Friday.

Paid attendance by an overflow crowd of 1,157 was reported by pleased South Rowan AD Angie Chrismon, who added that figure didn’t include passes to coaches and senior citizens.

Padgett entered the game with an ERA of 0.40 and riding an entire season of domination. He had allowed four earned runs all season and seven runs total.

South defied all sorts of odds by putting together a seven-run fourth inning against Padgett that proved decisive.

Padgett was sharp for the first two innings, getting lots of groundballs, and a well-executed safety squeeze bunt by his younger brother, Morgan Padgett, provided the Mustangs with a 1-0 lead.

Lefty Leffew got a colossal out to end the second inning, keeping South’s deficit at 1-0 when Logan Dyer bounced out with the bases loaded.

Padgett showed signs of being human in the third, as South threatened with a single, two walks and two wild pitches, but Padgett got Nathan Chrismon to pop up with the bases loaded to maintain that 1-0 lead. Still, it was a high-stress, 25-pitch inning for the tall right-hander.

South went to work with one out in the fourth. Jacob Ritchie’s single and Leffew’s double got it started, and a walk to Carson Crainshaw loaded the bases.

JD James’ two-run single put South ahead to stay and was one of the pivotal hits of the game. A wild pitch made it 3-1. Then South scored on a miscue for 4-1.

Then it was back to the top of the order. After consecutive hits by Kane Kepley, Chrismon (a triple to the center-field fence) and Ty Hubbard, it was 7-1. Padgett had to throw 33 pitches in the bottom of the fourth.

Cobb Hightower’s lead-off double helped East get a run back in the top of the fifth, but South answered in the bottom half with a run-scoring single by Finch McMillin for an 8-2 lead.

Leffew, who allowed five hits, reached the pitch-count limit in the top of the sixth with two men out. Oddie relieved him and ended the inning with a strikeout.

East threatened to make things exciting in the seventh, as Hightower, Dyer and Griffin Warden rapped singles to open the inning. Hightower scored on Warden’s hit to make it 8-3.

But South’s defense came through one more time, turning Aiden Schenk’s line-drive to right into a 9-3 double play.

One strikeout by Oddie later, and the Raiders celebrated.

Carson ended the baseball season with a 4-2 third-round loss at 11th-seeded East Lincoln (19-6).

Hayden Simmerson (6-6) pitched 5 2/3 innings for the Cougars, striking out eight.

Carson had six hits, with Simmerson and Efird getting two each.

Isaac Armstrong was the winning pitcher. He struck out nine for the Mustangs.

Campbell Schaen pitched a complete game, but Mooresville lost 4-2 to East Forsyth in the third round of the 4A state playoffs.

Cadence Lane had two hits for the Blue Devils.

In the NCAA regional in Florida, Nick Lyerly (East Rowan, UNC Greensboro)  shot 76 in the second round after opening with a 5-under 67.

Lyerly is tied for ninth entering Wednesday’s third round.