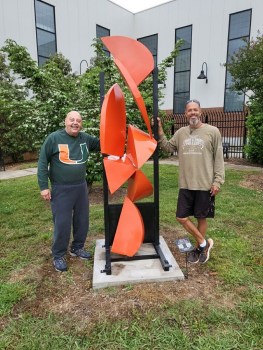 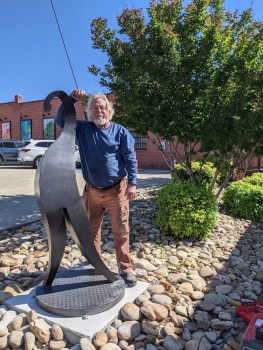 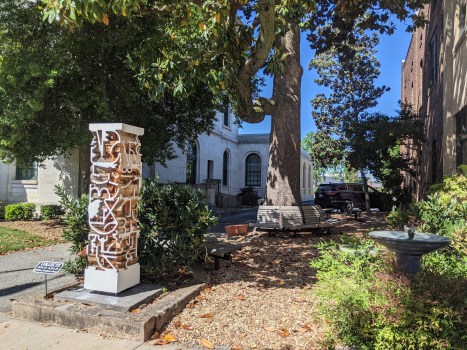 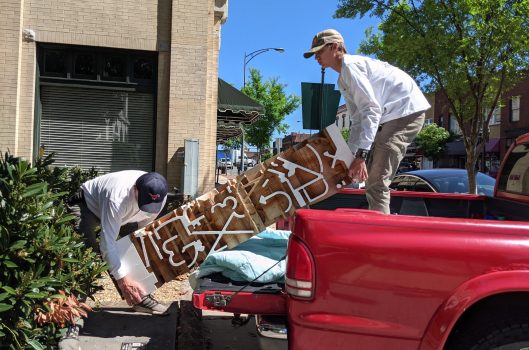 SALISBURY — Walking around Salisbury this week, visitors may notice some new and unfamiliar sights in the community popping up in corners, parks and public spaces.

The 2022 Sculpture Show has returned to Salisbury with installations from artists around the country being added to sites throughout the city. Installations began Friday.

This year’s series of sculptures include a variety of different works that each capture a unique perspective from the artist and which beautify the streets, neighborhoods and campuses around town.

For one sculptor, the event marks an annual opportunity to show his appreciation for Salisbury and the opportunity it has given so many artists to display their work. Robert Coon has been sculpting and creating art for decades around the Southeast and was excited to unveil his Big Orange Stack sculpture to the public last week.

“I think it is fantastic that the city of Salisbury has this annual sculpture show and that they have been doing it for so long, too,” Coon said.

Coon’s work is located in front of the Salisbury Water Plant at Church and Kerr streets and was installed with the help of the city as well as Coon’s son, who traveled with him last Friday from Florida to continue the family’s participation in the series.

The Big Orange Stack is part of Orr’s “TumbleWedge Series,” which focuses on his interest in the falling affect the wedges have on viewers and is also inspired by a famous scene from The Andy Griffith Show.

Other works can be found throughout neighborhoods around Salisbury including sculptures by Hanna Jubran in Castlewood, Charles Pilkey at Livingstone College and a piece by Carl Billingsley at Catawba College. Pilkey also has a sculpture at the Salisbury Depot. Richard Conn’s sculpture on Easy Street, Wayne Vaughn’s work at Magnolia and Foil Tatum parks, and Richard Pitts’ pieces at Country Club Hills and the Trolley Barn all offer onlookers new and inspiring pieces around the community as well.

For the first time, a sculpture was also installed in front of Horizons Unlimited for visitors and the public alike to view. The artist, Roger Martin, titled the piece “Circumstantial Evidence.” The work was sculpted out of clay before being cast in bronze by the Albemarle native and has an emphasis on the reflection of light it creates to “express the personality or mood of the subject matter.”

Matt Amante’s sculpture at the Rowan Public Library, works by Jordan Parah in Trinity Oaks and at the Lee Street theatre, and pieces by Jason Morris (also at Trinity Oaks) and Dean Leary at St. Luke’s Episcopal Church round out the new entries for the 2022 series.

Those interested in learning more about the Sculpture Show can download the free OtoCast app on their phones so that they can go on a virtual tour of the different works, meet the artists, and see where they are located around the community.

The sculptures are all for sale to the public and the city hopes that new interest in these works will lead to community members purchasing them for themselves or to keep the sculptures in the public spaces where they are would be located permanently.

The Public Arts Commission for Salisbury is dedicated to making art more accessible and visible to the city and inquiries about the works or how to make a purchase can be directed to public.art@salisburync.gov . The series is available each year starting in May until being replaced with new works the following April.